Ever since Sarah Palin gave a speech to pro-life organization Susan B. Anthony List, a firestorm has erupted over whether Susan B. Anthony was pro-choice or pro-life. What we do know is that Anthony and other women suffragists battled for decades to gain the right to vote. The fruit of their labor would be the Fifteenth Amendment, granting African American men the right to vote in 1870. Of course, Anthony was buried by the time women's suffrage finally arrived 50 years later.

I, for one, would like to see a woman president (not 50 years from now) and gender equality in my lifetime.

But the current rendition of "feminism" will never get us there. The construct is divisive, proactively exclusionary and opening hostile towards women of different ideologies. Achieving gender equality is impossible in a framework where some of women are viewed as less equal. 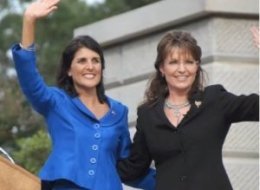 Fortunately, there is another option. A new "pro-women" movement led, initially, by women on the right. The movement is inclusive, current, and refreshingly focused on supporting women. And why should we care whether it's Republican or Democratic women (or both) who lead us to gender equality? After all, our historical women leadership is richly diverse in political beliefs and value systems.

Sadly, some current day feminists view this ideological diversity as a death knell. When the f-word departed Sarah Palin's lips, it was officially an act of war. So shaken was the feminist center of gravity, that historical women were exhumed to be used as weapons.

And so began the battle for Susan B. Anthony. Never mind that as women historian Anna Belle Pfau points out: These were two very different worlds... Early feminists like Anthony would hardly recognize the debate that is being held today. Some feminists express righteous indignation that not only did a pro-life organization name itself after this historic woman, but that Sarah Palin had the nerve to refer to Anthony as "one of my heroes." How utterly ridiculous! Susan B. Anthony belongs to us all, not just the 20% of women who consider themselves feminists!

Also exhumed was Betty Friedan. This time a feminist blogger asserts (without evidence) that "women such as Palin" dismiss and disparage Friedan's women's movement. Actually, Friedan, who desperately tried to make women's rights palatable to everyday women from Peoria, Illinois, would find much to like about women like Sarah Palin, Meg Whitman and Nikki Haley. These women embody the notion of having a choice: to work, to raise a family or both.

And with the benefit of choice, came women's work-life struggle: a crucial issue that has gone unaddressed. Thankfully, the pro-women movement is tackling it head on. We should applaud Republican women for embracing their strength, power and motherhood all at the same time. Even Democratic women find it appealing: "What I like about Palin related to this whole feminist thing is that her marriage really does seem to be an equal partnership, with her husband giving her plenty of room to shine, and her not hesitating."

We should also applaud that at a perilous time for our country, women are stepping forward to lend a hand. As Abagail Adams observed centuries ago: "Great necessities call out great virtues." If the fraternity of leadership is failing, it's time to give the Mama Grizzlies a chance to restore things for ourselves and our children. Even if we don't agree with the ideology of Liz Cheney, Gov. Jan Brewer or Rep Michele Bachmann, it's refreshing and imperative to finally hear women's voices in our national discourse.

But the most exciting aspect of the new pro-women movement is women support women. Sarah Palin is setting the pace by not only recruiting and endorsing, but also to standing by women political leaders. And conservative women in the media like Michelle Malkin, Ann Coulter and Laura Ingraham are continually defending their women leaders.

Which is why it's so confusing.

The feminists who are now gripping onto the f-word so tightly that their knuckles turn white, do not support women. And not just women of different ideologies like Sarah Palin. Many of these same feminists did not support pro-choice, Democrat, Women's Rights Are Human Rights Hillary Clinton in her effort to become our country's first woman president. Hmmm. Let's see: Sarah Palin, who supports women, is "fake" and "shameless"; while women who do not support women are "feminists"?

As I consider "feminism" and "pro-women," here's my visceral reaction: Feminism feels like a trip back to junior high school full of mean girls -- ganging up and cliques that exclude. I barely made it out alive the first time and I'm not eager to go back.

Pro-women feels mature and positive. It makes me (a pro-choice, pro-gay rights, registered Democrat) feel not only welcome, but also supported, empowered and excited. I'm proud to stand alongside conservative men who explain that they "support and admire strong, powerful, independent women." Turns out, so do I. And, yes, now I can see a path to gender equality in my lifetime.