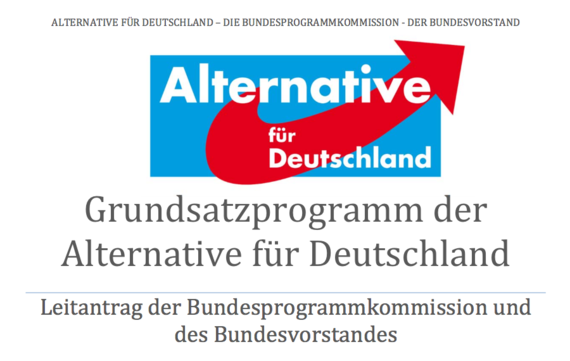 This weekend the new bad boy of German politics, Alternative for Germany (Alternative für Deutschland, AfD), held its party congress in Stuttgart. In many ways it was the German equivalent of a Donald Trump rally in the United States: outside lines of excited supporters as well as (violent) "anti-fascist" protesters, and inside chaos and Islamophobia. The party congress was to be a test for Frauke Petry, who had taken over the party from one of the founders, Bernd Lucke, at the congress last year.

Petry had shifted the AfD to the right, slowly but steadily transforming it from a conservative anti-Euro party into something between a neoliberal populist party, like Nigel Farage's United Kingdom Independence Party (UKIP), and a nativist populist party, like Marine Le Pen's National Front (FN) in France or Geert Wilders' Party for Freedom (PVV) in the Netherlands. The Stuttgart congress was widely expected to solidify the party as the latter, i.e. a populist radical right party, putting nativism, authoritarianism, and populism at the core of the party ideology. In this aspect, it did not disappoint.

The party's first "Program of Principles" (Grundsatzprogramm) reads like a populist radical right classic, albeit with some remnants of the party's more conservative origins. Its motto is: "Courage for Germany. Free Citizens, Not Subjects." The preamble then states, "We are liberals and conservatives. We are free citizens (freie Bürger) of our country. We are convinced democrats." This seems both a remnant of the bourgeois-conservative (bürgerlich-konservativ) origins of the party and a message to the state that they are not "hostile to the constitutional" (Verfassungsfeindlich) - which could lead to a party ban in Germany, as the extreme right National Democratic Party of Germany (Nationaldemokratische Partei Deutschlands, NPD) is currently (again) facing.

However, the mostly national-conservative preamble is followed by a clearly populist radical right program with a particular emphasis on Islamophobia. Nativism is at the core of the program, as the AfD has replaced the Euro with Islam as its new main enemy. Article 7.6.1 states: "Islam does not belong in Germany." Geert Wilders couldn't have said it clearer - even if the rest of that article is more moderate, seemingly targeting Islamism rather than Islam. The party also wants a ban on the burqa and niqab as well as a French-inspired ban on the veil (art. 7.6.5). The earlier "subtlety" on Islam is undermined a bit further in the program, however, where the program states: "As long as Islam has not gone through a real reformation, we demand the closing of Quran schools (Koranschulen) because of the uncontrollable danger of radical indoctrination that is hostile to the constitution" (art. 8.2.7). But while the congress produced a populist radical right party program, it did so with considerable trouble. Party elites and members remained divided between each other and themselves over the future direction of the party. For example, vice-chairman and party spokesman Alexander Gauland had to refer to the famous German conservative statesman Otto von Bismarck (1815-1898) to convince rebellious party members that Germany should stay in NATO ""Bismarck would have wanted it."). The party also failed to reach consensus on health care and climate policies - the latter a result of fierce resistance by "climate change sceptics."

Although the original conservative anti-Euro wing has been almost completely marginalized - Lucke has tried a restart with the so far unsuccessful Alliance for Progress and Renewal (Allianz für Fortschritt und Aufbruch, ALFA) - the populist radical right majority is still challenged by a more conservative-neoliberal wing and a more extreme right wing. The former is mainly represented in the party leadership, by people like Gauland and Beate von Storch, the Member of European Parliament (MEP) who joined UKIP's Europe for Freedom and Direct Democracy (EFDD) political group after the conservative Eurosceptic European Conservatives and Reformists (ERC) threatened to kick AfD MEPs out - the other remaining AfD MEP, Marcus Pretzell, joined the radical right Europe of Nations and Freedoms (ENL) of FN and PVV instead. The extreme right wing is particularly strong in the (new) membership, but has a voice in the leadership through people like Björn Höcke, who has, for example, made barely veiled racist remarks about African immigrants.

Consequently, AfD's Stuttgart Congress is quite similar to Die Republikaner's Siegburger Congress of 1985. That meeting solidified the radical right turn of The Republicans (REP), which like AfD had emerged from within the political mainstream (i.e. the Bavarian Christian Democrats, CSU), but left the struggle between the radical and extreme right camps undecided. While the Siegburger Manifest was the start for the REP's short-lived electoral boom, at the end of the 1980s, its inability to marginalize extreme right elements would inevitably lead to the party's downfall shortly after.

At this point in time, AfD is much more similar to the REP in the late 1980s than to the FN and PVV today. The FN is an almost 45-year-old political party, which has largely sorted its internal divisions, and can depend on a nationwide network of well-established branches with hundreds of professional politicians and thousands of experienced volunteers. In sharp contrast, the PVV is a one-man party, which can distance itself from anyone (except of Wilders himself) without any electoral damage. The AfD is a new, unorganized, strongly divided party in still the most hostile social and political climate in Europe. So far it has profited from the ambiguity of its character, i.e. at the borderline of the political mainstream, but the Stuttgart Congress has decided that issue.

But while it is now clear that the AfD is a far right party, it remains to be seen whether it is radical or extreme right. This new ambiguity is an open invitation to both political opponents and the German state to look deeper into the party's "constitutional" character - one law professor has already claimed that the new program is in part "clearly unconstitutional" - and to extreme right individuals and groups to "infiltrate" and make the party theirs. These two processes could rapidly lead to a downward spiral of scandals and infighting, as has happened with all previous radical right parties in Germany. In other words, the future of the AfD remains virtually as unclear as before this weekend.