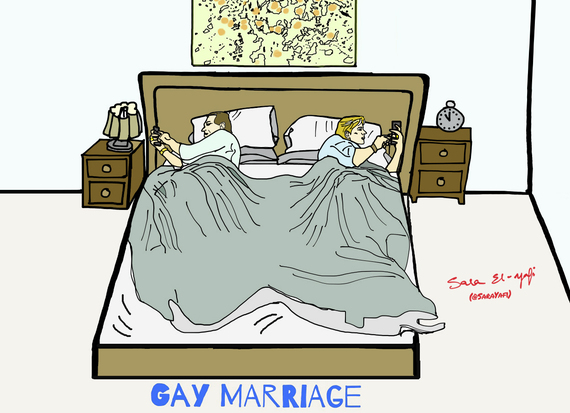 There are three lessons that I believe if we all learned about societies while we're alive, life would fare better for us all:

1. Progress in society is inevitable; it advances through the good times and bad times, invariably and inevitably, whether you are on board or not.

2. Progress is a result of several factors, but there is only one factor that is proving itself to be the only obligatory ingredient for progress to materialize, and it is social equality.

3. If you say "so what?" repeatedly over and over again, sooner or later, you either will be slapped by an aunt or be taken into custody.

For the sake of this article, I will only focus on the first two points.

A country with no social equality is a country that stagnates. That is a fact. UNICEF issued a report stating that child wellbeing is not at all related to average income in each country, but is strongly related to inequality. Mental illness is more common in unequal societies. Violence, drug addiction, low life expectancy, high infant mortality, obesity, low educational performance, homicides, high imprisonment rates, slow social mobility, teenage births and lack of social trust are all, again, more common in more unequal societies, regardless of how rich the society is. In fact, some of the richest countries do worst in terms of social problems. Inequality is the newfound poison.

There even is a natural explanation for this phenomenon. You see, nature naturally subsists in a state of dynamic equilibrium. To sustain life, a natural system needs balance, or an equal distribution of constituents. As long as the system is balanced, it remains stable and alive. However, if the weight of things shifts onto one side of the scale, imbalance sets in, and the natural state of affairs gets distraught. The natural order of things will attempt to rebalance things earnestly, but if it fails to do so, nature will then cancel the system altogether. Indeed, it seems nature everywhere does not appreciate imbalance, that is why it resorts to a monumental reformatting of the state of affairs every time any imbalance sets in (wildfires, predation and extinction are examples of how nature chooses to regulate imbalance.) Thus, to recap, a system with a healthy balance is the only sustainable system in our natural world, and an imbalanced system, if not corrected, is a system that will die. That is the golden law of natural equilibrium. That law holds true for our human bodies (see body temperature and blood pH regulation), it holds true for the ecological succession and biodiversity on the planet, and it holds true for human societies.

In a human society, if any group of people gets repressed and excluded from society legally, socially or endemically, a dire state of imbalance eventually takes place, which threatens general stability. Consequently, as with the natural world, the state of affairs will attempt to move things around to create a new balance to ensure survival: That is the force of "dynamic equilibrium" at play, as discussed above. If the equilibrium succeeds, the system will be mutated into a new adapted system (compare American democracy of 1810 versus American democracy of 2010). If there is resistance (as there usually is), the oppositional forces will collide, which will either result in the destruction of a part of the system in place (like, say, with the Confederacy in 1865) or in the annihilation of the whole system (see all empires of history). But no matter what occurs, social imbalance will simply not be sustained for long. It is unnatural and it is the reason many civilizations fall: They miss the brink of equality and the state of affairs collapses them. And that is the unequivocal history of humanity.

The American LGBT community is estimated to be anywhere between two percent and 11 percent of the American population, with results varying depending on the anonymity of the survey (The Williams Institute and Gallup's most recent poll estimate it to be about 3.5 percent). That's a scope ranging between a very conservative estimate of six million human beings to a lavish 35 million human beings, with the latter number being almost equal to the African American community in the USA (surely with overlap). The United States, whether analytically or unsystematically, recognized that by keeping the LGBT community ostracized, it was going to pay a heavy price for it. Sequestering a population of that size, legally, socially and ethically affects the dynamics of the entire group, and it already has in the American society on so many levels. The health issues, psychological issues and suffering from dignity violations of the LGBT community carry a hefty price for all, but more significantly, there is a noteworthy economic burden on all: the LGBT community is poorer than the population at large... But note this interesting piece of data: a working married gay couple is richer on average than a working straight couple... Surprised? Don't be. It's called the magic of equality. By tying down the LGBT community to selective unequal norms on the outskirts of the system, by attempting to push them into exclusion, it bodes trouble for both the LGBT community as well as the whole society; it decreases the standard of living, arises health and social problems, which in turn, slow down progress and increase societal agony. Everyone suffers. In fact, violence, civil unrest, poverty and pandemics multiply in environments of inequality and harsh social classification, but peace, security and progress multiply within environments of equality. Indeed, when brought up in dignifying environments of tolerance and equality, people naturally thrive. You can even compare, within the United States, the level of tolerance of a state versus the measure of its wealth and/or its standard of living. There seems to be an astonishingly strong positive correlation between tolerant states and a high standard of living. It's not a secret. Equality is progress. Progress is equality. And best of all, it seems to be nature's only sustainable choice.

So when same-sex marriage is formally adopted in a leading world society of 319 million people, that is testament to progress in a scientific and natural sense. It's not a "pro-gay" stance, it is not an "irreligious" stance, but it is a self-dignifying stance that will give a healthier society for everybody regardless of what gay people do. Even if you may never get in contact with a gay person, chances are, as an American, you will live a happier and longer life because that is what equality does, it raises everyone's quality of life. As for the rest of the world, the spread of equality in the superpower that is the United States also bodes good news for you. More equality in the United States means a more healthy, peaceful and balanced society will be lit, it means less inner conflict, it means less trauma, it means less anger, which maybe means that the United States would feel less compelled to invade everybody all the time, and this is not even a joke. A harmonious, equal society is not a violent society, there is scientific and statistical proof for that. Officially recognizing the dignity of others is a monumental gain for all peoples in all places. There simply is no better return on investment than treating fellow human beings with dignity and equality. The angry religious people should know the value of this truth better than anyone because it was Jesus who said it first.

So congratulations to all human beings. A victory of equality anywhere is a victory for human beings everywhere. Balance wins. Always.

And mostly, congratulations to the American LGBT community on winning its battle for marriage equality; you now can marry each other and legally sleep on opposite ends of your beds while browsing your social media too.

*Illustration by the author, Sara El-Yafi