There's big news in the world of aviation and environmental policy this week. After more than seven years of deliberation, punctuated by legal challenges from environmentalists, the US Environmental Protection Agency published a draft "endangerment" finding that is the first formal step toward regulating aviation greenhouse gases under the Clean Air Act. The eventual outcome will be a rule to limit emissions, likely the domestic enforcement of ICAO's CO2 emission standard for new aircraft, which will be finalized early next year.

What are the drivers of EPA's endangerment finding? Few deny that the global aviation industry is an important contributor to climate change. In 2012 aircraft emitted about 700 million metric tonnes (MMT) of carbon dioxide worldwide; if commercial aviation was counted as a country, it would rank 7th after Germany in terms of CO2 emissions. Globally, these emissions are on a path to triple by 2050, a time by which many developed countries hope to reduce their emissions by up to 80 percent.

For this reason, and because aviation is a fundamentally global industry, countries have been working under the auspices of the UN's International Civil Aviation Organization (ICAO) to hash out a global framework for controlling CO2 emissions from aircraft. But that process is tripping up over how to equitably distribute reduction targets by country or carrier, including how to account for the fact that some aviation markets are growing faster than others, with resulting emission increases. Industry has established a goal of net carbon-neutral growth from 2020, which if pursued simplistically would require larger reductions from fast-growing carriers than slower-growing established carriers. In contrast, some developing countries argue that future reduction targets should take into account the fact that richer nations are responsible for the bulk of climate change to date, and therefore should shoulder a heavier burden for reduction targets (Common But Differentiated Responsibilities, or CBDR, for those following the argument).

While the allocation issue is inherently a political question, the data support the contention that developed countries, and the U.S. in particular, hold special responsibility to reduce aviation emissions. One way to see that is to consider trends in jet fuel consumption over time for departing flights, using data collected by the Energy Information Agency (EIA). CO2 emissions are proportional to fuel use, and because EIA accounting assigns half of those emissions to the country (airport) of origin and balance to the destination, it provides an equitable if rough means of determining the relative share of each country's emissions. Complete EIA data on jet fuel consumption by country is available between 1986 to 2010, as shown in the figure below. As the figure shows, jet fuel consumption, and therefore CO2 emissions, has traditionally been dominated by richer nations, but their share is falling over time. As an example, while the U.S. was responsible for almost half of global jet fuel use in 1986, that figure fell to less than 30 percent in 2010. 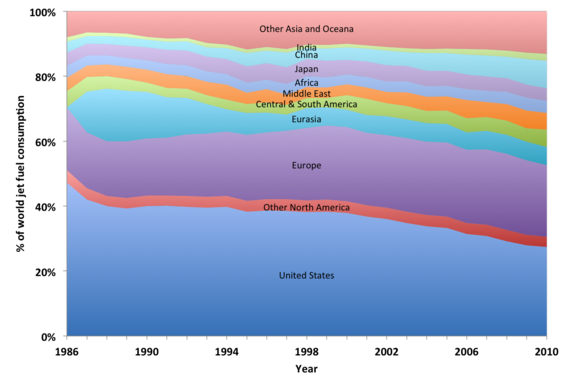 Now, that's looking only at national emissions. Another way to approach the equity question -- in fact, the only fair way according to many experts -- is by considering per capita emissions. Some countries with low but growing emissions also have large populations; in contrast, the contribution of other countries with smaller populations may be underestimated if one considers only their absolute level of emissions. The graphic below depicts average annual per capita jet fuel consumption, and therefore aviation CO2 emissions, for key countries and regions, as well as the global average in 2010.

Average annual per capita jet fuel use in gallons, 2010 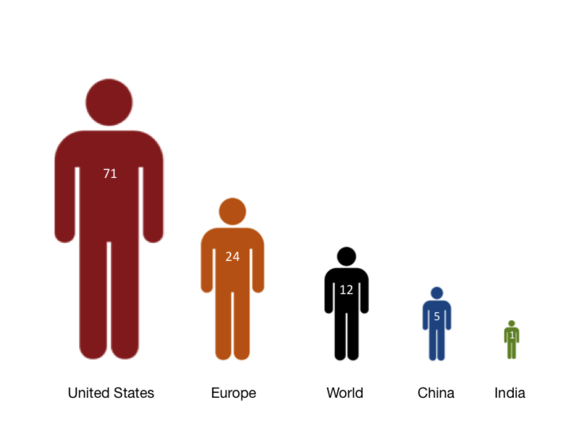 As shown in the figure, in 2010 U.S. travelers were responsible for approximately three times the jet fuel use of European travelers, and six times that of the average global citizen. Far down the ranking were China and India, which per capita used only 7 and 2 percent, respectively, as much jet fuel as the U.S. And this considers only recent emissions; if historical emissions were considered instead the gap would be even larger. Viewed through this lens, it is clear that citizens of developed countries should bear a larger burden of emissions reductions than residents of emerging economies, although aligning that fact with the fact that all carriers, whether well-established or emerging, compete directly in the global marketplace won't be a trivial task.

The data show that Americans -- more exactly, Americans that travel a lot for business and pleasure -- hold unique responsibility to address the aviation emissions problem. With this decision from the EPA, which focuses on the domestic implementation of ICAO CO2 standard, the U.S. government has finally begun to respond to the challenge. There are reasons to be skeptical of ICAO's approach -- see the concerns outlined here -- but it is good to see the U.S. finally starting to take this issue seriously. With luck, EPA's actions will also translate into the U.S. taking a proactive, positive role in international negotiations to develop a global deal to control aviation emissions by late 2016.