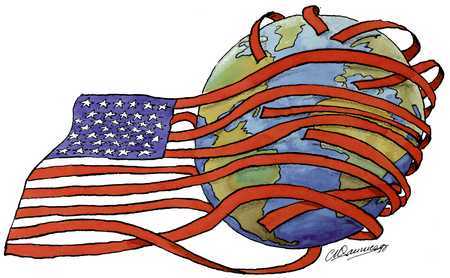 Being from New Zealand, I have not stopped hearing about the rise and rise of China. All of our public and private leaders just seem to go on and on about how we need focusing all our exports on China, "the rise of the Asian middle class", is a phrase I have heard often. And just to make clear what is probably already evident, I am sick of it. The main thing I have against it is that I don't believe in the (continued) rise and rise of China. In this blog I will discuss why I have always held this belief, and why I have always believed that American dominance will continue for the indefinite future.

To begin with though, I will state why I have never believed that China will be as great as everyone (appears) to be saying it will be. To start with is the fact that they have basically been coming from a low base, and it is no wonder that they are levelling out at about a 7 percent GDP growth rate, after years of 10 percent-plus growth. Another contributing factor is that their income levels per-capita are still pretty low, at around $6000. A further contributing factor is the gap between the dirt poor and ultra-rich is excelerating at a faster rate than anywhere else in the world, other than India. There is enormous disparity between the rural and impoverished interior and the growing coastal cities. Most of the so-called 'private' businesses are actually majority owned by the state. Yet, the biggest factor I believe that will hamper China's continued expansion is that their growth is all about copying what others have already done.

If we think back to the Industrial Age (obviously not literally) we can remember that for America it was a time of the construction of the railroad, kerosene was invented (along with a slew of other oil-based products), we saw the introduction of the automobile, and steel was (made and) forged for huge construction projects. Although within China we have been seeing a lot of construction going on, it is nothing we haven't seen happen elsewhere in the world. The methods they have used for construction are similar to what was used in industrial age America. And even the new industrial methods which are occurring in China, were not invented there. The obvious example is Tesla Motors, which entered China last year with their sleek electric cars. In case anyone reading this has been living under a rock, Tesla is an American company, not a Chinese one. So my point with the Tesla example is that there is a new industrial age occuring right now, and it is not China who's driving it, it's America.

Obviously, America has it's risks as well, like the $16 trillion national debt that will have to be dealt with at some point. But it is my belief that the positives in it's future will far outweigh the negatives. The other new-age industrial industries like Solar and Space Travel, will be lead in the future by American companies. The building of satellites for faster internet and mobile communication will be an area lead by American companies (like Facebook and Space X).

The big fact is that China's reputation as "the world's factory" which delivered it double digit growth for many years, is now being lost. The flip side of China's huge growth in past decades has meant that it's workers now demand (and rightfully so) to be paid above slave labor scale. So in future years all this means is that China's (once great) factories will lose their competitive advantage. And the companies (like Nike) that exist as the real industrial powerhouses of today, will just shift their production elsewhere. The best example of this again comes with an Elon Musk company, Solar City. They are establishing an enormous panel factory in New York called Silevo. The establishment of this factory marks a stark change from what has traditionally occurred within the Solar Industry, which is that the panels would get made in China due to the lower costs of production.

Lower costs of production are not however the reason that Solar City is shifting its production base. Their reasoning is so that they can have more control over their supply, and there is the obvious competitive advantage they will create via becoming a completely vertically integrated residential solar provider. There is a high level of corruption in China as well, which contributes to their shift. The Macau Casino Industry is beginning to learn this the hard way. With the earnings of many of the big players over there, like Crown Melco and Wynn Resorts, taking a hit.

Altogether, China has far too many problems in it's future that will outweigh the positives. Entrepreneurs like Jack Ma certainly have the ability to be today's Chinese versions of Rockefeller, Vanderbilt and Carnegie, but economic and societal headwinds in China will prevent them from doing so. American entrepreneurs like Musk and Zuckerberg will not face the same headwinds. They exist in a society that will continue to be supportive of their endeavors. The correct frameworks for "zero to one" growth were created in America during the 1800s Industrial Age, and they continue to exist today. And those same forces will continue to enable America to be the world's powerhouse for the foreseeable future.