Spoiler alert: I love epic stories with universal meaning for varied audiences around the world. In sum, that is why I think Jonathan F.P. Rose's new book will become a must-read classic. And, if 400-pagers are not your style, it's at worst a well-written, must-browse wonder, with relevant lessons for us all.

Rose is a real estate developer, philanthropist and fine arts patron with prominent New York roots, and holds a graduate degree in regional planning from the University of Pennsylvania. His book, The Well-Tempered City, captures a life's worth of experience and thinking, and his seven years of applied work on the book is readily apparent. He has done what many of us aspire to do, and translated experience into broad-based, focused lessons about the potential of our cities. He shows what we can achieve if we avoid discord, and align towards our latent human abilities to coordinate and mutually address inevitable change.

Rose's inspirational theme is Johann Sebastian Bach's then-novel, 18th century system of tuning musical instruments in The Well-Tempered Clavier. He takes Bach's premise of aligning human ideals with natural harmony, and applies it to urban progress and potential such as greening cities today.

I recently caught up with Rose in Seattle and tested my surmise that even those who prefer the short length of a tweet should immerse themselves in Rose's ideas. Why? First, current trends within cities tend to proceed independently and without context, which complicates our ability to converse holistically, and carry out solutions. Second, our state of civility is sorely lacking, and we need new ways to do urban business amid complicating global trends. I was not disappointed; in our conversation Rose illustrated how The Well-Tempered City presents a baseline to address both of these concerns. 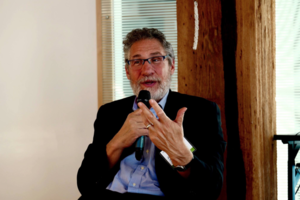 He jumped quickly, with excitement, to a Portland Sustainability Institute (now "Ecodistrict') graphic (reproduced above) that he often uses in presentations. With read-the-city enthusiasm learned from his brother-in-law, architect/urbanist Peter Calthorpe, Rose explained Portland residents' aspirations for a green, accessible and safe city, with places where people will want to spend their time.

But here's a pleasant caveat: Rose's points stem not from a developer's "green-washing," but from well-studied explanations in the book about humans, and how they are wired, dating from our common ancestors who evolved millions of years ago.

After reading The Well-Tempered City, and speaking at length with Rose, I emerged with excitement and optimism, because with simple attention to his humanistic base, and concepts of vision, coherence and compassion, I saw how idealism and implementation merged. As a developer, Rose applied "the developer's test" to his book's ideas and found them workable---and so do I.

With a volume full of implementation examples, it is easy to understand why. His key paragraph from the Introduction---also already reproduced in other online excerpts and feature articles---is worth repeating:

Imagine a city with Singapore's social housing, Finland's public education, Austin's smart grid, the biking culture of Copenhagen, the urban food production of Hanoi, Florence's Tuscan regional food system, Seattle's access to nature, New York City's arts and culture, Hong Kong's subway system, Curitiba's bus rapid transit system, Paris's bike-share program, London's congestion pricing, San Francisco's recycling system, Philadelphia's green stormwater program, Seoul's Cheonggyecheon River restoration project, Windhoek's wastewater recycling system, Rotterdam's approach to living with rising seas, Tokyo's health outcomes, the happiness of Sydney, the equality of Stockholm, the peacefulness of Reykjavík, the harmonic form of the Forbidden City, the market vitality of Casablanca, the cooperative industrialization of Bologna, the innovation of Medellín, the hospitals of Cleveland, and the livability of Vancouver. Each of these aspects of a well-tempered city exists today and is continually improving. Each evolved in its own place and time and is adaptable and combinable. Put them together as interconnected systems and their metropolitan regions will evolve into happier, more prosperous, regenerative cities.

In other words, if you worry that a lofty fascination with classical music is not the recipe for mediating concerns about urban density, affordability, access to public transit or climate change, fear not, because it's all there. I watched Rose nimbly grab excerpts like this one during our conversation, and later in the afternoon, in a response to several questions at a Seattle event sponsored by the Urban Land Institute and the Congress for the New Urbanism (as a warmup to the organizations' overlapping Seattle conferences next Spring). From San Francisco's recycling example to Hong Kong's iconic public transit system to the potential catalytic role of community groups, the book has, as he told me, a little bit for everyone interested in urban issues today.

Perhaps I am inspired by my overlaps with Rose's world view (such as tendencies to emphasize lessons learned from cities long ago, such as the historic sustainability of Matera discussed in my 2011 The Atlantic article), but I'm just one of many who will find in The Well-Tempered City a roadmap, and many examples, of well-tempered places and their underlying principles.

For example, I would argue that today's placemaking movement is one element of Rose's emphasis on how we are capable of fine tuning our cities---with human scale approaches---already embedded in who we really are.

This post first appeared in similar form in myurbanist, here.

Image of Jonathan F.P. Rose composed by the author in Seattle. © 2009-2016 myurbanist. All Rights Reserved. Do not copy.

Chuck Wolfe's new book on using urban observation as a tool to affect change, Seeing the Better City will be available by early 2017 from Island Press, through local booksellers and Amazon.