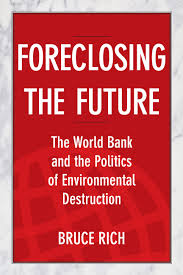 With 1,800 ongoing projects and more than $30 billion in annual disbursements, the World Bank is the world's most powerful development institution. More than anything, the lender prides itself in undertaking the most complex, difficult initiatives in the developing world.

Building a pipeline from remote oilfields in Chad through Cameroon's rainforest was just the right challenge for the World Bank's ambitious approach. The multibillion-dollar project -- the largest investment on the African continent -- involved numerous oil companies and financiers from around the world. An innovative benefit-sharing mechanism and an environmental panel of experts were created to ensure that the pipeline would raise the living standards of the poor in a sustainable way. When it was approved in 2000, the U.S. government called the project a "prism" through which the world would view the World Bank and its approach to development.

Fast forward to 2009. The pipeline has been built, and the oil has begun to flow. Fueled by the new revenues, Chad's military budget has grown more than 20-fold, civil unrest and corruption have soared, and the benefit-sharing scheme has unraveled. Infant, child and maternal mortality are rising. Oil has once again become the devil's excrement for a poor African nation. Meanwhile, a part of the forestry reserve that was supposed to offset the pipeline's ecological footprint in Cameroon is being flooded by a reservoir -- courtesy of the World Bank.

If the Chad-Cameroon pipeline is a prism, what is wrong with the World Bank's approach? A new book by Bruce Rich, a veteran Bank observer and critic, provides a compelling answer. Titled Foreclosing the Future, the book is based on three decades of experience in battling the Bank and a treasure trove of internal documents.

Where the state is weak and civil society lacking, a rapid influx of aid or oil revenues can easily undermine democracy and the rule of law. Unless governance is strengthened first, aid dollars may not actually lead to social development. Yet the World Bank does not have the patience for slow, messy, participatory processes. Its senior management equates lending volumes with development impact, and the staff is under relentless pressure to move money out the door quickly. As an internal Bank report found in 1997, this pressure leads to a culture in which "the lessons from past experience are well known, yet ... generally ignored in the design of new operations."

Bruce Rich illustrates the contradictions of the World Bank's lending culture through an extended series of projects and initiatives. He describes dams that impoverished local communities and fostered corruption, forestry projects that caused massive deforestation, and coal-fired power plants which bypassed the poor for whose benefit they were supposedly built. He documents repeated promises to learn from past mistakes -- and cosmetic reforms that failed to address the Bank's flawed business model.

Bruce Rich calls the focus on lending volume rather than development outcomes the World Bank's "original sin." The problem has been documented and acknowledged in numerous internal reports. Yet when the opportunity for the next big pipeline, dam or coal mine arises, the interest of the aid bureaucracy in keeping the lending tap wide open frequently prevails. Bruce Rich compares the internal reports that document the lessons of past experience with the chorus in a Greek tragedy -- a tragedy not for the Bank, but for the poor and the environment.

The new book offers a passionate and sharp-tongued but well-informed analysis. Rich doesn't spare the World Bank management with critique, but is aware that the buck doesn't stop there. The governments who own and oversee the Bank recognize its failures, but will not take steps that put contracts for their equipment suppliers and the steady supply of raw materials at risk. Ultimately, the author says, the World Bank is "a microcosm of global society's geopolitical and environmental contradictions."

What needs to be done? Bruce Rich calls for a reorientation of the World Bank's priorities to reward the quality of outcomes rather than the quantity of lending. This, he argues, would allow the institution to become a "beacon" of good social and environmental practice, for others to follow. The author is short on specifics, and the chances of this happening are slim. Yet his new book is a welcome memory pill as the World Bank enters a new cycle of ignoring the lessons of past mistakes.