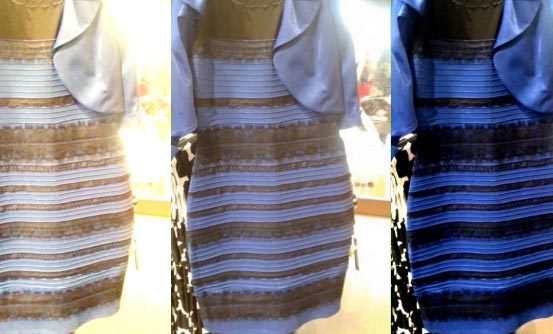 It's been fun to watch pundits try to add something -- anything -- of value to a worldwide discussion about a $77 dress. Google.com, for example, returned more than 29 million hits today for "TheDress", comments which seem to generally fall into three camps:

What the commentators have generally overlooked is the larger and deeper meaning of #TheDress meme.

We live in an era in which everything is both local and global at the same time.

Traditional borders have been demolished by innovations in transportation, communication technology, the cultural influence of brands, and policy making. And yet social media, neo-tribalism, niche marketing, and the decline of liberalism have all combined to make it easier for online and real world communities to remain culturally and socially isolated from each other -- convinced that their opinion is the right one.

The global Islamic jihad movement and its counterpoint, the "Global War on Terror," are the most obvious examples of these trends. Both are instances of grand plans to implement a worldview that goes beyond the nation state. And both are led and acted out by players who are generally insulated within a narrow cultural echo chamber that reinforces perceptions of rights, entitlements, privileges and conceptions of "right and wrong".

Each side is unwilling to internalize the experiences and perceptive of the other, and therefore incapable of acknowledging how their own misunderstandings and missteps might reinforce and contribute to the problem. And these tendencies obscure what it is that they actually have in common: regardless of how you might view their methods, both sides are ultimately looking to create a just and equitable society.

The View From Here

Let's be honest. It's not hard to raise the bar on meme significance. Among last year's biggest and most discussed memes were a sexy mug shot of a prisoner, an athlete's impressive catch, the face of a musician in an unguarded moment, and the size of a celebrity's rear end.

Underlying these memes it's possible to see the faint trace of debates on race and ethnicity, the role of celebrity in culture, and how we define the masculine. And yet none of these are new or innovative debates. Haven't we seen and discussed the exact same thing over and over again, year after year?

#TheDress didn't really break the internet. But it also didn't really break the mold on memes. Instead it joins with other recent memes that have, for better or worse, all called into question the truth of what we are seeing. The Uma Thurman "What's happened to her face" meme is another good example of this, in which a powerful underlying subtext is really whether or not we can actually believe own own eyes.

Similarly, by focusing discussion on how and why people see things differently, #TheDress touched on what is perhaps the most crucial pillar of human life today: how our perspective is shaped by our sensations and our culture.

Yellow and white? Blue and black? Both? Actually, white and gold, it turns out. It was a just trick of the light and variation in viewing devices.

While the Internet can breathe easier knowing that one of the great mysteries of life has been solved, the niggling mystery of sensory perception continues. We may call this color white and that one gold, but how our eyes work with our brains to recognize these colors remains as subjective as flakes of snow.

The miracle of perception is not that we can see things, it's that we can tell others what we see so they actually know what we are talking about. We can meaningfully abstract our personal experiences and apply it to all manner of things, including our friends, family, tribe and community as a whole. This may be, in fact, why homo sapiens -- with our weak senses of smell, taste, touch, hearing and strength (at least, relative to other species) -- has managed to survive and thrive. We don't need to run every time we hear the snap of a twig. We can instead consider the context, implications and potential impact of possible decisions based what our senses tell us.

Subjectivity is an essential pre-occupation of the postmodernists, many of whom felt that the fact that we all see things differently means that, first, no one's view point is more privileged than another's, and, second, claims about the meaning of things can't be trusted without a thorough deconstruction of the cultural, social, gendered and political structures of the person making the claim. Phew, who has time for that?

But if all viewpoints are equal, and there is no objective morale "truth" to be found, how do we work together -- but less make the world a better place?

The Buddha knew this as far back as 2,500 years ago. Rather than argue that there was one path to Enlightenment, he encouraged followers to find their own direction, using his own experience as evidence of what is possible. What's most important, he added, is to defy the echo chamber of subjectivity by always testing an observation or decision against the needs of the greater good.

I think what the Buddha is ultimately saying is that meaning and significance is a co-production -- something we create for ourselves in conjunction with what we've learned from our community, and which we then share back to the community in the hope that others can put it to good use. The more people and perspectives we involve in this process, the more solid our notion of what is real will become.

Powerful stuff? You bet -- and I'd like to see more memes of this kind. What are some of your favorite memes and why? Share them here.