Americans have been wondering why the recent surge of unaccompanied children streaming into the United States is happening, and why it's happening right now. Debate rages over why children flee their homes in Central America, but a little-known U.S. counter narcotics policy may explain how this exodus started.

The surge of migrants actually began in the fall of 2011, and the number of children crossing the Southern border has increased every year since then. U.S. Customs and Border Patrol apprehended 68,541 children in 2014, and the number is expected to reach 145,000 in 2015. Some commentators claim that children migrate because coyotes promise them immigration reform, or that they migrate to pursue economic opportunities in the United States. According to Sen. Ted Cruz (R.-Texas), "It's been widely reported that the administration is contemplating yet another amnesty...Granting another amnesty will result in those numbers being even higher." 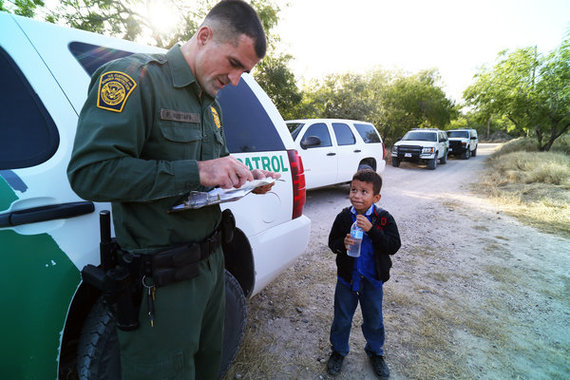 Explanations based on the possibility that our logjammed Congress will pass comprehensive immigration reform--or explanations that credit the public relations acumen of human traffickers--do not merit serious consideration. The real reason that children flee is that conditions in the Northern Triangle (Honduras, El Salvador, and Guatemala) have deteriorated sharply in the past four years. I have asked children why they left their home countries, and they overwhelmingly cite violence as the number one reason. But the question remains: why has life in those three countries recently become so unlivable for children?

The real explanation for the surge has to do with the "balloon theory" of counter narcotics strategy: squeeze the balloon by cutting off supply routes in one place, and drug traffickers pop up somewhere else. Right now, the path of least resistance cuts through the heart of Central America. As Sonia Nazario (author of Enrique's Journey and a board member of Kids in Need of Defense, an organization for which I do pro bono work) testified to Congress, "The U.S. has spent billions to disrupt the flow of drugs from Colombia up the Caribbean corridor. The narco cartels, mostly Mexican, have simply re‐routed inland, and four in five flights of cocaine bound for the U.S. now land in Honduras."

Since 2010, for example, Congress has spent over $263 million on a program called the Caribbean Basin Security Initiative ("CBSI") to stem the flow of illegal drugs through Caribbean transit points. The share of cocaine destined for the United States fell from 75% in the mid-1980s, to a low of 4% in 2011, thanks in part to U.S. drug interdiction. Although Caribbean drug traffic is back on the rise, many traffickers fled to Central America when they encountered resistance, and they never left. It's no surprise that the beginning of the surge of migrants directly coincided with effective U.S. drug enforcement efforts in the Caribbean Corridor.

Mexico's recent drug policies have also played a role. Since Mexican President Felipe Calderon declared war on drug traffickers in 2006, transporting narcotics through Mexico has become more dangerous and expensive for cartels. Since the crackdown began, as many as 80,000 people have been killed in Mexico's narco wars. This is bad for business for the Zetas and Pacific (Sinaloa) cartels. According to a recent report from the United Nations Office on Drugs and Crime, "downward pressure from the Mexican security strategy...has virtually suspended direct shipments to Mexico and forced as much as 90% of the cocaine flow into the bottleneck of Guatemala."

Even Honduras's current president blames counter narcotics policies for the surge in migrants. This summer, he told a Mexican newspaper, "The root cause [of the migration] is that the United States and Colombia carried out big operations in the fight against drugs. Then Mexico did it," which, he said, pushed traffickers into Honduras, Guatemala, and El Salvador. "This is creating a serious problem for us that sparked this migration."

The influx of drug traffickers into the Northern Triangle, and resulting turf battles between rival gangs vying for lucrative transit points for northbound drugs, have made the Northern Triangle the planet's most dangerous region for people who live there. Honduras has the highest murder rate in the world, with more than 90 murders per 100,000 inhabitants. El Salvador has the dubious distinction of the highest child murder rate in the world. For context, Honduras is more than four times as murderous as Mexico, a country that became too dangerous even for its own drug cartels. Compare Honduras's murder rate of 90.4 with the rates in active war zones like Iraq's 8.0, or Afghanistan's paltry 6.5, and the true terror of living in one of these countries as one of its most vulnerable citizens comes into focus.

The surge of traffickers and drug money in the Northern Triangle in the past few years did not create the problems faced by Central American children, but it has exacerbated poor conditions until they reached a tipping point in late 2011. These countries have notoriously poor governance, with large swaths of territory ruled by gangs, virtually untouched by government or police. In 2009, Honduras's military overthrew its democratically elected government in a coup, which decimated that country's already weak institutions. After the coup, the United States worked through diplomatic channels to ensure that Honduras's left-leaning president did not return to power.

To make matters worse, the United States deported thousands of Central American gang members into the Northern Triangle after those countries' civil wars in the late 1990s, effectively importing Los Angeles-style gang culture into societies that were already teetering on the edge of collapse. Street gangs like MS-13 have filled the power vacuums in these near-failed states, falsely promising a sense of security to the children they recruit. (Compare the case of Nicaragua, which is just as poor as its Central American neighbors, but did not receive an influx of deported gang members. Nicaragua is relatively safe and does not produce significant numbers of refugees).

Of course the United States represents better prospects for children migrants, just as it always has been for the millions of people who have immigrated here over the centuries. But claiming that the main motivation of the children who flee the Northern Triangle is anything other than violence and danger is worse than false, because such claims try to absolve Americans of the responsibility for solving the crisis. If we believe that the recent arrivals are just immigrants moving here to find jobs (the fact that they are children who should be in school notwithstanding) or because we think they want a free pass to citizenship, then there is no urgent need to help them. But understanding what's really going on in the Northern Triangle, and why, imposes a moral responsibility on Americans to treat these children as what they are: refugees fleeing a serious humanitarian crisis.

Andrew T. Avorn is a litigation attorney at K&L Gates LLP. He has been temporarily posted to Kids In Need of Defense (KIND), where he represents unaccompanied children in asylum proceedings. The views expressed are solely those of the author and do not necessarily represent the views of KIND and/or K&L Gates.