It was almost two in the morning when the phone rang. My mom was frantic and scared, and her voice was shaking the moment I sleepily mumbled hello. I shot right out of bed because unfortunately, I knew that voice all too well.

I could hear my mom's on again/off again, meth-addicted boyfriend pounding at her door and refusing to leave after they both got drunk at a bar together and got into an argument.

It took seconds for me to wake my roommate up, and we drove the five miles to my mom's house in a few more seconds. He scampered off into the dark before we got there, but we confronted him at his house early the next morning before he left for work.

Let's just say that was the last time that ever happened.

I was 22 at the time, fresh out of the Army and working at a homeless shelter for the mentally ill when I found out that my mom needed more help than my clients did some days. You see, my mom is a victim of domestic violence. Like many victims, my mom knew the attacker all too well, and she returned on her own accord several times before it finally ended.

A decade later and 2,000 miles east, I'm walking in high heels with my son and one of my dogs through the downtown area of the small and quaint little Midwestern town I now call home with a sign that says, "I'm man enough to walk in her shoes." Myself, and several other hundred men all participate in an annual event to raise awareness for the victims of sexual assault and domestic violence with the "Walk A Mile In Her Shoes" event, in coordination with my local Sexual Assault Response Team (SART) at the Prosecutor's Office. 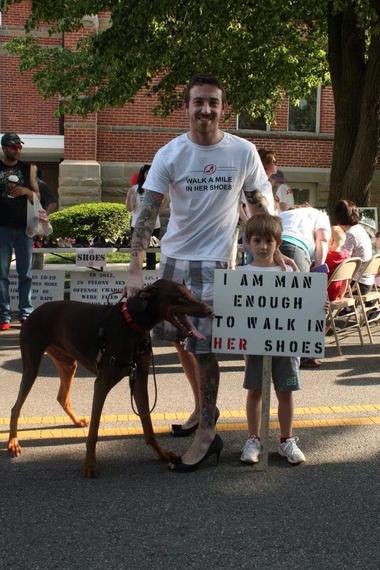 Walk a Mile In Her Shoes

Recently, "He Who Shall Not Be Named" among animal advocates, especially bully breed advocates, resurfaced in the news for resigning a contract with another football team (you have to know I'm not talking about Voldemort now but it does start with a V). A few days later, a month-old post on my personal Facebook page with a picture of me in a shirt that had only four words on it, combined with a short commentary about role models in society, began to go viral.

I'll simply share the post here, which to date of me writing this blog has been shared over 3,000 times, liked over 6,000 times and had over 1,000 comments and you can come back to this blog when you're caught up.

The comments were largely favorable from fellow dog lovers and advocates but any post with that much activity is guaranteed to attract the internet trolls, firing away like keyboard commandos with thinly veiled (and usually poorly spelled and grammatically incorrect), whitewashed excuses for abject animal cruelty.

The most prevalent "argument" is one that animal advocates hear all the time. The logical fallacy known as the false dichotomy (also known as a false dilemma, either/or fallacy, either/or reasoning, fallacy of false alternatives, no middle ground and polarization) of caring.

In short... if we care about issue A (dogs) then we clearly don't care about issue B because we aren't talking about it (insert issue -- Rape was the most common one considering He Who Shall Not Be Named's teammates). Therefore stop caring about A and spend your time caring about B. Therefore, A isn't that big of a deal and we're all clearly idiots wasting our time. A stranger has a better concept of how we should personally spend our time and what we should care about than we do, if you believe the keyboard commandos.

Because it is not humanly possible for someone to hold compassion in their hearts and minds for more than one issue. Besides, animals are "things" and they aren't people, after all. At least to those people. 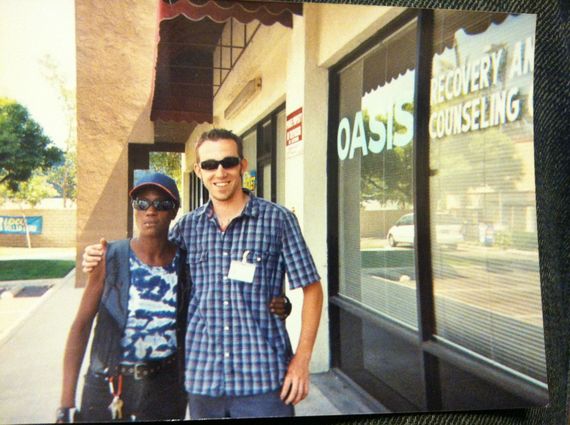 Karen, one of my homeless clients as the Program Manager for a homeless resource center for the mentally ill years before my work with animals.

The reality is, the world is full of empathic and caring people -- as well as selfish, shallow people who cannot possibly care less about anything they are not directly affected by. They tend to appear as internet trolls and abuse apologists on Facebook posts.

Pigeonholing someone based on a cause they support and using that to make assumptions about them and their values and beliefs says so much more about the person making those assumptions than the person that cares enough to speak up. Some of us are educated enough to know that animal abuse is a dangerous, dangerous red flag in human behavior and is a haunting predictor of future abuse towards people. We know that the FBI tracks animal abuse because seemingly every sociopathic murderer in society started by abusing animals.

We also know that:

- 71 percent of pet-owning women entering women's shelters reported that their batterer had injured, maimed, killed or threatened family pets for revenge or to psychologically control victims; 32 percent reported their children had hurt or killed animals.

In one study, 70 percent of animal abusers also had records for other crimes. Domestic violence victims whose animals were abused saw the animal cruelty as one more violent episode in a long history of indiscriminate violence aimed at them and their vulnerability. -- American Humane Association

My team, and my life, does revolve around animals today. We've rescued hundreds and hundreds of animals from horrific situations with little more than a rusty pick-up truck and a load of determination in the beginning. In most of those situations, we didn't just find an animal in need, we found humans in need and we helped them any way we could, too. We've picked up a lot of friends and supporters along the way, and a lot of abuse apologists too. But the more work we do the more we hear about the false dichotomy of caring. And every time my phone rings about an animal, I immediately flash back to my mom's frightened voice on the phone and the way my heart pounded as I raced to her house. 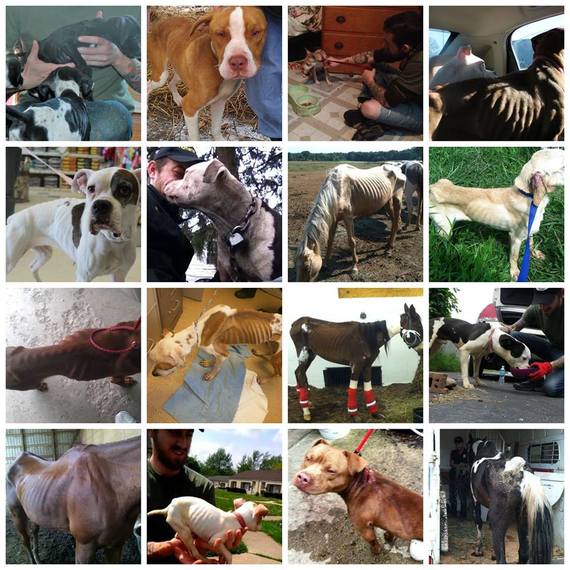 Just some of the animals ACT Ohio has rescued in the past year.

If you don't want to discuss or care about issues that don't affect you, your species or your family, that's your right. But that is also what is destroying America from the inside out. Apathy, pigeonholing and indifference to the suffering of others around us will take this great country down much quicker than any foreign threat on our soil.

To read more about why I rescue animals, check out my previous blog!