On Sept. 27 New Jersey Superior Court Judge Mary Jacobson ruled that civil unions are not equal to marriage and that same-sex couples must be allowed to marry starting Monday, Oct. 21.

In response, Gov. Chris Christie, who vetoed the same-sex marriage bill passed by the legislature last year, immediately filed an appeal and requested to stay the decision and block same-sex marriages until the appeal could be heard.

Judge Jacobson rejected the appeal to stay. Not to be outdone, Gov. Christie came back out swinging and asked the Appellate Division to halt marriage equality. Last week the New Jersey Supreme Court agreed to take up the appeal, with oral arguments to take place in January, but the court refused to move back the Oct. 21 start date. Today Gov. Christie agreed to comply with this ruling, so New Jersey will indeed begin recognizing same-sex marriages beginning this Monday. It's been a busy week in the halls of New Jersey justice.

Gov. Christie has made no secret of his preferred plan for legalizing same-sex marriage. He wants it on the ballot so that "voters can decide." Most recently, in his Oct. 8 debate with his opponent in the gubernatorial race, State Sen. Barbara Buono, he said:

Even some marriage equality proponents say that a ballot initiative is the most expedient way to pass the measure: faster than the courts, and certainly faster than waiting for a change of heart by Gov. Christie, who has vowed to veto marriage equality into oblivion as long as he is at the helm. So why wait? Let's put this thing on the ballot and get 'er done.

Here's why we can't:

All those good reasons aside, my chief concern is much more personal.

My partner and I have two daughters, ages 7 and 4. Since each was old enough to talk, I've been taking them down to our local firehouse to vote with me on election day. We all go into the booth together, find the candidates' names and press the buttons. I read special ballot questions aloud and explain why we're voting yes or no. When we're done, we all go for bagels and chocolate milk.

I love that time with them. I love that they are developing a lifelong connection to the democratic process and an awareness that they can make their voices heard by participating. The pride they wear upon leaving the voting booth is priceless. 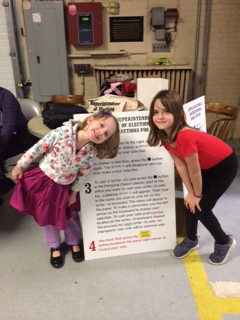 But here's the thing: I don't want to have to read a ballot question about same-sex marriage to my daughters. See, they think their parents are already married. They know my partner and I were married by our rabbi on Nov. 16, 2003, at a big, fancy wedding in New York City, with all our friends and family in attendance. They've seen the photos and the video of our respective fathers' toasts. As far as they know, we're as as married as any of their friends' parents.

We are fortunate to live in Maplewood, N.J., an exceptionally progressive and diverse town, where two-mom and two-dad families are almost as common as opposite-sex households. Our kids don't think our family is strange; to them it's just one more example of a family, as worthy and as beautiful as any other.

They don't know that some people, like our governor, think our family is less worthy. And I don't want them to know that a minute before they absolutely have to.

Most of all, I don't want them to absorb the shame I know I will be feeling as I stand there in line for the voting booth, knowing that all my neighbors, friends, and people who may or may not like "my kind" are deciding whether the commitment that my partner and I made a decade ago and the loving family that we've created are as valuable, worthy, and sacred as their own.

So, as a mother, I make this plea: Let's not put it to a popular vote. Had it not been for the governor's veto, we'd have the right to marry today. At least that right is coming Monday. If marriage equality ends up being revoked after Oct. 21, there is one path to marriage equality that's shorter than the ballot: overriding the veto. New Jersey United for Marriage is working overtime to convince legislators to change their "no" votes to "yes" so that, if necessary, we will have a supermajority that can pass marriage equality without the governor's support. As of now, we need just seven more state assemblymen and three senators to vote yes before Jan. 14. If they do, there will be no need for a ballot measure or a protracted, expensive Supreme Court case.

And there will be no reason for me to leave my daughters home on election day next November.