While some are buying presents and trimming their tree for Christmas, a very different kind of spiritual celebration gets underway every year at Stonehenge. It’s the winter solstice, also known as Yule in some Pagan circles, and the occasion draws thousands of Pagans, Druids, spiritual seekers and tourists to the prehistoric site for a reverent and ecstatic ceremony.

The December solstice marks the longest night and shortest day of the year in the Northern Hemisphere, and this year it falls on Wednesday, December 21 at 5:44 EST.

In ancient Pagan traditions, the winter solstice was a time to honor the cycles of life and death and celebrate the sun’s rebirth as the days would slowly begin to lengthen in the months leading into spring. Many modern practitioners of Pagan and earth-centered spiritual traditions observe the holiday, and at Stonehenge, the celebration is particularly special.

Stonehenge, which celebrates its 30th year as a World Heritage site this year, is believed to be roughly 4,500 years old. Its significance as a link to British prehistory has drawn countless visitors over the years who come to gaze upon what’s considered to be the most architecturally advanced, prehistoric stone circle on the globe.

Apart from its architectural significance, Stonehenge holds a place of sacred importance to many. Much of its history is still shrouded in mystery, though one thing that’s sure is that it was built upon a landscape that had long been used for religious purposes. The stones that make up the massive circle are thought to have been collected from distant places, some as far as 150 miles away, and brought to this particular location. They were then erected using sophisticated, interlocking joints ― but how exactly the builders accomplished these feats is unclear.

It’s also unclear what exact purpose the site served to those who built it. English Heritage, a UK-based charity, notes that speculations on Stonehenge’s original function include “a coronation place for Danish kings, a Druid temple, an astronomical computer for predicting eclipses and solar events, a place where ancestors were worshipped or a cult centre for healing.”

Whatever its intended purpose, Stonehenge remains a place of wonder for thousands who visit the awe-inspiring structure every year. And its significance is especially potent at the winter solstice.

“One of the most important and well-known features of Stonehenge is its alignment on the midwinter sunset-midsummer sunrise solstitial axis,” a spokesman for England Heritage told BBC. “The midwinter sun sets between the two upright stones of the great trilithon.”

In other words, on the two annual solstices ― summer and winter ― the sun respectively rises and sets in perfect alignment with the site’s massive stones.

To witness the astronomical event, visitors typically arrive early in the morning on the day of the solstice to watch the sunrise and stay through to the sunset. Local Druids host a ceremony during the day, as revelers and tourists alike bask in Stonehenge’s ancient atmosphere.

“What we’re really here for is to celebrate the fact that the cycle of the world turns, and from now on the days get longer and it’s the return of the sun,” Druid leader and activist King Arthur Pendragon told BBC at the Stonehenge winter solstice celebration in 2014. “It’s a time of change and hope is renewed ― the same message really from a pagan perspective as from a Christian perspective. That’s what this season is all about ― a message of hope.” 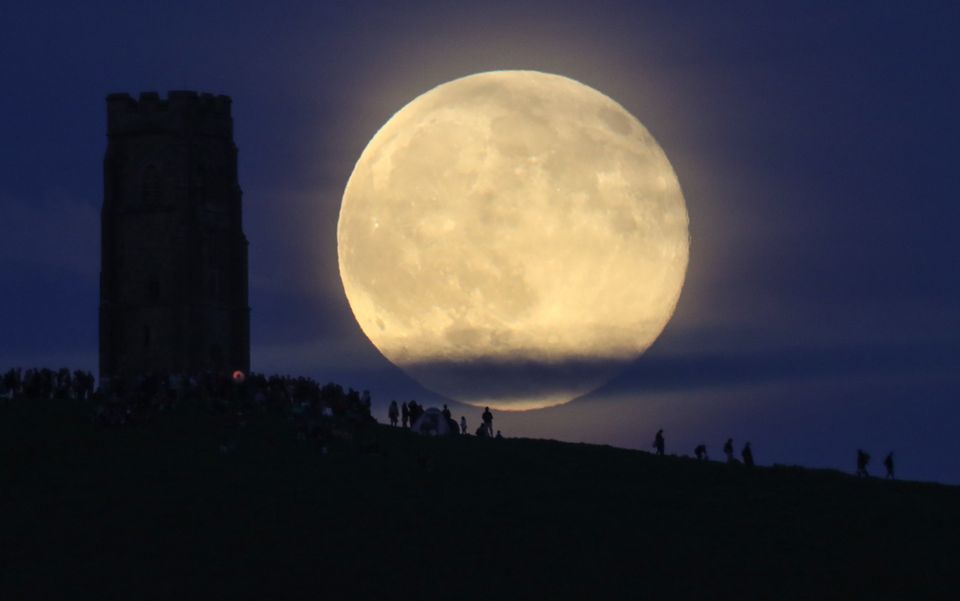 1 / 10
A full moon rises behind Glastonbury Tor as people gather to celebrate the summer solstice on June 20, 2016 in Somerset, England.
Matt Cardy via Getty Images