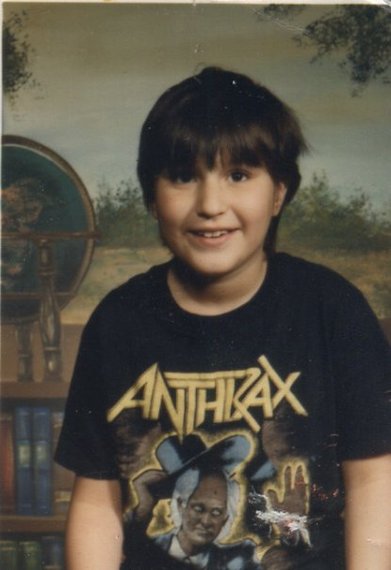 Retro-cycles are now a normal part of pop culture and have been for sometime. It is well documented that it's traced to the emergence of 1950's youth culture and their post WWII expendable income. You wait 20 years and there it is again. Lately Tupac and Kurt Cobian are commonplace, but you see that already.

When Thrash metal emerged in the 1980's it was a perfect storm of aesthetics, politics, tired 1960's ideology, and the emergence of a shameless, oil based, global terror war that continues today. Thrash metal (The 1980's solution to extreme guitar based music.) was peaking during the end of cold war, but of course it was not just the global politics that drove the aesthetic.

You can say thrash metal was the culmination of suburban teen boredom, global economic realities, The never ending cold war, imminent (so it appeared) mutual assured destruction, and perhaps an inaccurate 1960's ideology that love would save us all I the end. Every generation has its cross to bear.

We know music got heavier after this period in the 1980's. There was black metal, death metal, grindcore, etc. But thrash metal was different in that it retained something of a locked-in groove. Many novices can't hear it through all the volume and I can understand that.

While Thrash metal is usually summed up with the "Big Four" groups of the 80's: Metallica, Megadeth, Anthrax and Slayer; it was a massive global movement along with other key groups such as Exodus, Testament, Morbid Angel, Sepultura, on and on...

I've noticed an unanticipated phenomena occur over the past five or so years. I've been hearing new sounds from 1986 unchanged and unadopted. The first time was while checking out Vermafug at Bowery Electric here in New York. I loved how these guys crystallized that year and moment. Later I discovered Municipal Waste, their offshoot Iron Reagan (even their name is 80's), and more recently Lich King. Lich King's promotional materials say, "We think the sound of thrash was perfected in the 80's and we're not trying to add anything to the mix. We're just coming up with riffs and songs that the old masters didn't." I should add here I prefer their cover of "Agent Steel" to the original.

Perhaps thrash metal has reached a similar place to be-bop? Were the masters of the art frozen in their relevance? Let's face it. Nobody gives a shit what Megadeth does now, but couldn't you say the same for Chick Corea? The fact remains that certain young people are picking up on the relevant years of these artists and copying them without contextualizing the work for the present. We accept it in Rockabilly, which is inherently inbred in it's obsession with authenticity; the Thrash Metal of the mid-80's wasn't born to look back to a bygone era.

By the 1990's Thrash Metal's popularity had become eclipsed by the heavier strains of Death Metal, Grindcore, Industrial, and more recently the uncatagorizable strains that involve psychedelia, shoegaze, and anything else you can think of. Yet those are still growth industries and make perfect sense for cross-pollination with Metal.

I don't have to work at all to like these new Thrash bands and ask myself why it's so easy for me to love all these new-old school thrash bands. I'm sure it's a type of nostalgia. If I were born in a different year, I may find it cloying in the way I feel about most other kinds of nostalgia.

More importantly what I find interesting is this impulse to dig back into 1987 and create new work from 1987 that doesn't expand it at all. It's not something that I usually find healthy for a culture. So yeah- it leaves me with mixed feelings, but does it even fucking matter? It still sounds good.