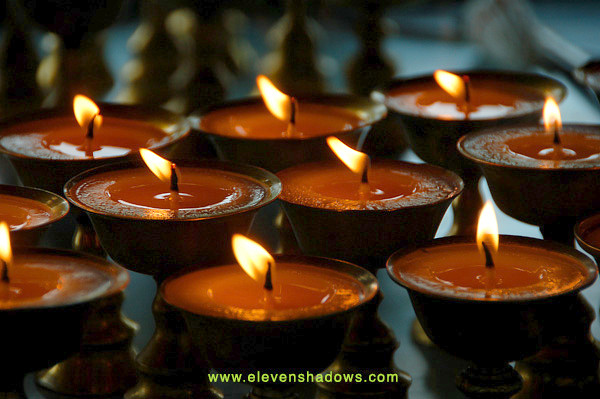 "Chinese political circles get very worried about anniversaries." So says Professor Perry Link, an expert on Chinese human rights at the University of California, Riverside. And this year they have plenty to worry about with 2009 marking the 30th anniversary of the closure of Beijing's Democracy Wall and the 20th anniversary of the People's Liberation Army's brutal suppression of a mass student movement in Tiananmen Square. And then there is the 50th anniversary of the Tibetan uprising.

But Beijing has a rather schizophrenic tendency to announce politically sensitive anniversaries and then to scramble to manage their equally sensitive consequences. The Chinese government is hailing March 2009 as the 50th anniversary of "democratic reform" in Tibet, and has tagged March 28th as the anniversary of "Serf Liberation Day" when the Chinese army put down a rebellion led by the exploiting class and freed one million Tibetan serfs from oppression. Xinhua says that this day is an opportunity for Tibetans to "remind themselves to cherish the good days they have enjoyed since the democratic reform." But for most Tibetans, March 2009 is being commemorated as the 50th anniversary of a popular uprising against China's oppression, the failure of which confirmed Tibet's status as an occupied nation.

For China's Communist Party -- a time to celebrate their achievements and re-affirm the wisdom of the political status quo. For Tibetans -- a time to mourn the loss of their country and to re-affirm their commitment to resistance. One would be hard pressed to find two more opposing national perspectives on the same historical events.

On January 25th, a Tibetan blogger posted a comment to a Tibetan-run Chinese-language website, saying that the Party wants Tibetans "to sing and dance about 'Serf Liberation Day' and how the great Party liberated old Tibet and a million serfs from darkness. You can't say anything to the contrary -- nothing about the families that have been shattered, the many people who were killed, who were beaten to death for the sake of upholding the unification of the motherland and the unity of the masses -- don't mention those." 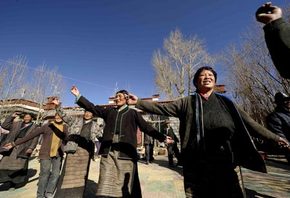 The Party wants Tibetans to be happy, or at least to seem to be happy. If the emancipated serfs and their descendants are walking around gloomy and dejected, or worse, taking to the streets to protest their "liberation", it doesn't look good. But this is exactly what is happening. The International Campaign for Tibet reports that "Tibetan women are in the streets, with solemn faces, showing sadness rather than happiness, and to symbolize the non-celebratory mood, they carry around dry bread and eat that." In addition, the UK-based human rights organization Free Tibet has reported that this month saw the largest protest by Tibetans since last spring. It erupted in Lithang County in the area of Kham on February 15th and built over a period of days, resulting in dozens of arrests and two unconfirmed deaths. The protests were apparently sparked by the arrest of a Tibetan man who had publicly called for Tibetans not to celebrate the traditional holiday of Tibetan New Year called Losar.

The Tibetan blogosphere is buzzing with sentiments about this popular movement that's sweeping the region calling on Tibetans to boycott celebrations of Losar in lieu of a national mourning for the victims of last year's crackdown of the protests. ICT's Mary Beth Markey describes it as "an unprecedented and highly significant statement, akin to people in the United States deciding to forego Thanksgiving." And the Party has taken notice.

As one Tibetan netizen put it: "Our great Party is not happy because at a time when it wants you to be happy, you're not happy. And that's a problem with your thinking...The great Party pays close attention to happy or not happy, and celebrating or not celebrating the New Year."

It is traditional for Tibetan families not to celebrate the New Year that follows the death of a relative as part of the funeral rites. Tibetans declaring this Losar season as a period of mourning for those who lost their lives in the 2008 uprising amounts to saying that those who died in the protests were family. "Let's remember our lost brothers and sisters on March 10th and make this the greatest demonstration of all times," one blogger urges. Another Tibetan living in exile writes: "Why should we put on this fake smile on New Year?...We will not celebrate because we are all Tibetans...We will stand together through suffering and happiness."

Woeser, a Tibetan writer and blogger who has become the poet laureate of Tibet's freedom struggle says: "Let us light butter lamps to make offerings in memory of the dead...in the corners where the video surveillance cannot reach." She writes that "in Rebkong, the local government has gone house to house with documents requiring Tibetans to sign their name or leave their thumbprint on the documents which say: 'I will ensure that there will be absolutely no demonstrations this year as there were last year, I will ensure I am obedient to the Party and government, and I will ensure that I will celebrate the new year.'" A posting in Chinese on a Tibetan website, under the title Don't Celebrate this New Year reads:

What kind of joys would make me forget those who were killed?I thought of them again last night--my compatriotsLying flat in the roadCovered in white sheetsA single hand suddenly fell outAnd dangled before meOh, heaven is so crowded!

For most Tibetans, Losar falls on February 25th. In parts of Eastern Tibet, however, the Tibetan and Chinese New Years are traditionally celebrated on the same day--this year, January 26th. When it became clear that the local Tibetans were not in the party mood, authorities started handing out firecrackers to encourage them.

According to ICT, an anonymous Tibetan blogger from the area of Amdo in the North-East wrote: "Thanks to the Party Committee of Xiahe County for issuing us firecrackers worth 100 Yuan [$14] to resist the public resentment of boycotting the New Year. I accepted the firecrackers, but never let my father know it, or he would 'beat me to death', so I threw them into the toilet. The county officials are busy supervising who else did not use the firecrackers....Official supervision of whether or not people use the firecrackers, and the PLA [People's Liberation Army] round the clock street patrols, is a new scene in Xiahe this year."

One source said that when Party officials turned up on the doorstep of Kirti Monastery in Amdo Ngaba to try to persuade the monks to join in the New Year festivities, a number of the monks suddenly decided to go into meditation retreat. Refusing to observe one's own cultural traditions doesn't, on the face of it, sound very provocative. But the response by the authorities shows how seriously China's Communist Party takes this stuff, and their reaction has helped to elevate Tibet's 'No New Year' campaign from an expression of personal grief to an act of civil disobedience.

In a rather desperate move, China's state-run Tibetan television service, XZTV, declared on February 15th that the government is even offering discount vouchers to Tibetans for their New Year shopping needs. The Party can pay for the hats, set the table, crank up the CD player and put up the streamers, but cadres have discovered a limit to their power--they can't force Tibetans to have fun.

Rebecca Novick is a writer and the founding producer of The Tibet Connection radio program. She is currently based in Dharamsala, India.