As a 20-year cancer survivor, I thought that I had heard of everything possible to promote good health. Then again, I also believe that the more you know, the more there is to learn. And moringa is proof of that.

Though I initially thought it might be a new Latin dance, I learned that moringa oleifera actually is a plant found in locales from the Caribbean to Asia to Africa, where it's been used in folk remedies for centuries. Almost unknown in the United States, its popularity is growing worldwide thanks to what many believe are its health benefits---ranging from boosting immunity, antioxidant and anti-inflammatory properties, controlling blood pressure, blood sugar, increasing breast milk, even headache relief. 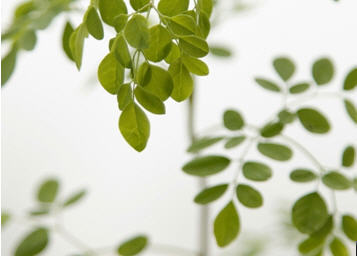 Moringa is so versatile that the entire plant can be used from root to seeds to tiny leaves; people fry, crush, boil, grind, blanch, even chew its various parts. Less creative or daring types who want its benefits can just take moringa as a supplement in its powder form.

I learned about Moringa thanks to Grace O., author of The Aging Gracefully Cookbook, featuring her collection of recipes to promote health, wellness and longevity. Moringa and 25 other intriguing ingredients form the foundation for her program called FoodTrients . As you might deduce, Foodtrients is a marriage of healthy nutrients and food, a philosophy inspired by the marriage of her parents. Grace's father was a medical doctor who believed foods could help his patients heal; her mother ran a cooking school in Southeast Asia where Grace was raised, and where people have been been eating indigenous plants known for health properties for thousands of years.

In addition to operating skilled nursing facilities in California, Grace O's mission is to share her knowledge and experience. Here's how she describes Foodtrients:

The nutrients in our food lead to our overall wellness...I start creating a recipe only after I find a fruit or grain or spice that has something beneficial to offer my body...To create my recipes, I scoured scientific studies, dug into long-established knowledge of medicinal herbs, sought out natural ingredients from cultures all over the world and drew on memories of my mother's culinary wisdom.


At her recent cookbook launch in Beverly Hills, featuring a Foodtrient buffet, moringa showed up as a dip paired with artichokes. I wasn't the only one at the event mystified by unfamiliar ingredients. Celebrity chef and Los Angeles restauranteur Eric Greenspan commented:

There were a lot of ingredients I didn't recognize.... Grace works them into everyday dishes, things like moringa, a plant with super nutritious leaves that she adds to vegetable soup. ..I was impressed by how well the flavors work together. What I love about Grace's book is that her recipes are very accessible and easy for the average home cook to execute. I'm already thinking about how to work moringa into my grilled cheese sandwiches!

In addition to chefs, scientists are also interested in learning more about moringa. It's the focus of current scientific studies seeking to prove its effectiveness as used in folk remedies. With a boost from Grace O's culinary creativity, moringa could soon become a household word. Remember you heard it here first.