Former British Prime Minister Tony Blair's appearance at the Chilcot Inquiry into the Iraq War was predictably slick. This was always going to be the case for the former barrister, so adept at public relations.

The testimony itself told us little we don't already know. Blair repeated the mantra he has become so accustomed to using when he said "I believed what I did was right." We heard how Blair "believed" Iraq had weapons of mass destruction, and how he "believed" the intelligence showed Saddam Hussein was a threat. The panel did not test Blair as many had hoped they would. The question of the legality of invading Iraq without a second UN resolution, and with no definitive proof of Saddam having weapons of mass destruction, was not pursued as stringently as it should have been. Also barely discussed was the moral case for the war. Did Blair not consider the thousands that were sure to be killed during a ground invasion? And if he did, how did he then decide to go ahead without being 100 percent sure of a threat.

Perhaps more interesting than Blair's appearance was the one a couple of days before by Elizabeth Wilmshurst, deputy legal adviser to the Foreign Office at the time the legality of the war was being discussed by the British government.

Wilmshurst's story is an interesting one, so a brief recap would be beneficial. Her opinion in the build-up to the invasion was that it would be illegal without a second UN Security Council resolution authorizing invasion - the first resolution (UN resolution 1441) being that Iraq should disarm completely and cooperate fully with UN weapons inspectors.

Wilmshurst resigned on March 20, 2003, following legal advice to the British government by Attorney General Lord Goldsmith which contradicted Wilmshurst's advice, saying the invasion could be justified by Iraq's 'material breach' of UN resolution 1441. Incidentally, Goldsmith had previously declared the invasion illegal, but later had a change of heart.

The evidence Wilmhurst gave should be of particular interest to those calling for the prosecution of Tony Blair for the invasion of Iraq.

Many have labelled Britain's engagement in the war decision a 'crime of aggression,' or the 'ultimate crime' as defined in the UN charter. The simplest definition of the crime is a military conflict launched without the justification of self-defense. We now know that Saddam Hussein did not have weapons of mass destruction, and that the British government grossly exaggerated the danger we faced in order to generate public support for the war.

The problem we face in prosecuting for this crime is that the only body with the jurisdiction to prosecute for 'crime of aggression,' is the International Criminal Court (ICC). The major obstacle with this being that the ICC has not yet agreed on a working definition for 'crime of aggression,' which of course makes prosecuting anyone for it near impossible. The ICC has planned a conference for this summer to debate and decide upon a definition, but even if one is agreed, it cannot then prosecute retrospectively. An article in the European Journal of International Law printed back in October explained the case, adding that there is also no domestic law in Britain which would allow for Blair et al to face prosecution. It says:

"Although the UK is a party to the ICC Statute and even if the ICC parties were to agree next summer on a definition of aggression and conditions for the exercise of ICC jurisdiction over that crime, Tony Blair and other UK leaders cannot be prosecuted for aggression by the ICC. This is because the jurisdiction of the ICC over aggression will not be retrospective.

Here from the Guardian blog on the inquiry, Wilmsburst essentially says the same thing:

"Chilcot asks whether the International Criminal Court can deal with crimes of aggression.

Wilmsburst says it does, in theory. But the ICC members have not agreed a definition of "crime of aggression". Until they do, the ICC cannot hear these cases. There will be a meeting later this year to consider this.

Asked if the ICC would be able to hear cases retrospectively if it were to agree a definition, Wilmshurst says it would not."

So there you have it, Blair is immune from prosecution because the only authority with the jurisdiction does not yet have a working definition of crimes of aggression. There was no legal case for launching the war, but no legal basis to prosecute for it. 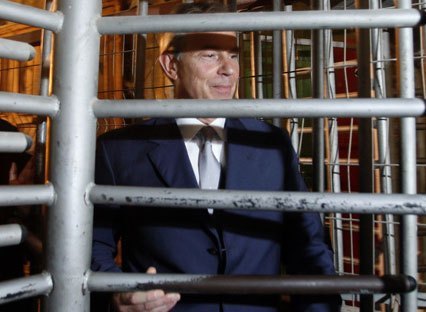 That being said, a campaign launched by British journalist George Monbiot makes some interesting arguments. Monbiot advocates a grass-roots campaign to urge the British government to adapt the law to be able to prosecute crimes of aggression, which presumably would allow prosecuting retrospectively.

"All those who believe in justice should campaign for their governments to stop messing about and allow the international criminal court to start prosecuting the crime of aggression. We should also press for its adoption into national law," Monbiot says in an article written for the Guardian.

It's an interesting idea, if not a bit optimistic. Changing the law seems to be a long-term goal, the crux of the 'Arrest Blair' campaign is to encourage members of the public to conduct a citizen's arrest of Tony Blair. The website is in the process of soliciting donations from those eager to see Blair prosecuted, the money raised will be given as a reward to anyone who attempts to perform a citizen's arrest of Blair. Anyone who carries out this task according to the rules stipulated is entitled to a quarter of the money in the pot at that particular time (at the time of writing the total amount donated stands at £9432). The first attempted citizen's arrest was made by anti-war campaigner Grace McCann as Blair left the inquiry on Friday.

It is unlikely the campaign will lead to prosecution, for the reasons discussed above. But of the two million who marched on London against the war in February 2003, of those who have lost relatives or friends during the conflict, a good number must see a citizen's arrest as an attractive option.