With Donald Trump, we finally have a Republican politician tells it like it is, say what he thinks, and mean what he says. He is the perfect representative for the Republican Party. He fits all the target demographics (rich, white, straight, male and Christian), falls right in the middle of the Republican spectrum, and doesn't shy away from expressing the bigotry that underpins his political beliefs.

I know it is too much to hope for, but if Trump wins the nomination, I think history will end up remembering him as having been pivotal in making America great again... by making crystal clear just how bigoted the Republican Party is. 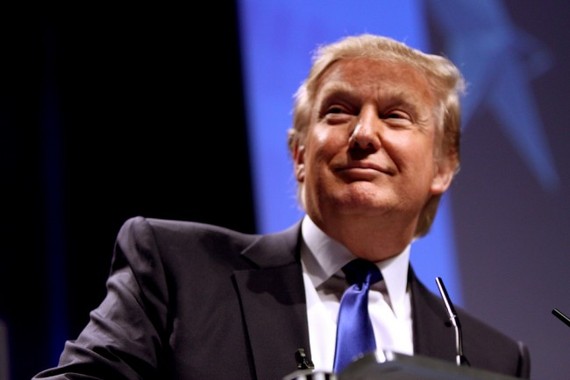 Republicans have been getting away with murder pretending they aren't bigots for 50 years now, when in truth they've been THE political force fighting against civil rights and propagating racism, sexism, homophobia, transphobia and xenophobia.

In case we're unclear, the default Republican platform on these issues is:

Bigotry is baked into the Republican platform. If you vote Republican, you are supporting this bigotry. There is no such thing as just voting for an individual; you are always also voting for a party. Yes, this is a partisan way to frame American politics, but blame the founding fathers for picking a winner-takes-all election system and guaranteeing we'd always exist in a two-party political system.

Even those that identify as 'moderate, socially liberal, Republicans' are perpetuating racism, sexism, homophobia, transphobia and xenophobia by allying themselves with right-wing bigots. Even if Republican policies were better for job growth (which is debatable, if not outright false), there is no world in which more jobs will make up for the harm done by denying people basic civil rights.

While Democrats have their problems with social justice (and this extends even to the left-most liberal Bernie fans), the parties are on two different logarithmic planes when it comes to social issues. Given that most Americans, even smart ones, still haven't figured this out about American politics, it seems we need Trump to make it painfully obvious to everyone what the Republican Party truly stands for: classism, sexism, racism, homophobia, transphobia and xenophobia.

Trump really is just saying out loud what most Republicans are thinking and saying in private; they just know better than to say it in public. And before we start leaping to the defense of Republicans, let's consider that Republicans have yet to truly denounce Trump as a bigot, even though he's been their presidential frontrunner for over five months now.

It's time for "moderate" Republicans to pick a side: are you with the right-wing bigots or are you going to denounce them and join the rest of us in the 21st Century?

Trump, especially in an election against conservative Hilary Clinton, should manage to make the presidential election a referendum on bigotry. If succeeds in making the bigotry of the Republican Party undeniable for moderates, he could well end up being remembered as a pivotal figure that helped make America great again.