There's Pandora, Mog, Last.fm, etc. Yeah, yeah, ok, ok we get it. People listen to music in different ways now, and in it's ubiquity music has lost some of it's value as currency. Well, I'm going to explain to you about turntable.fm and how it just might end up "Saving Music".

To really understand what I'm talking about you'd have to agree that there's a problem. Specifically, a problem with how we listen to and are introduced to music now. I would say that there's too much of it, and it's been reduced to background noise to digest and dispose of. It's value inherently cheaper than it ever before, and every new song, band or album isn't competing with what came out this week, it's competing with all music, ALWAYS. The days of sitting down with a record and really listening to it are almost a thing of the past to people that aren't music nerds such as myself. Or is it?

By putting you in a room with your friends (or strangers!), you can all play each other's music. So the music you hear is exactly as great as the taste of the people playing. Think it sucks? hit "lame", if enough people do it... the song is skipped. If it's great, hit "awesome" and that person gets points. The avatar starts bopping it's head in time and it's a great feeling. And I am here to tell you, it makes you listen, actually *LISTEN* to the music more. 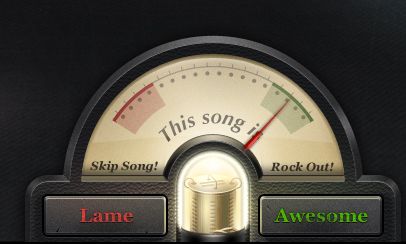 It's the simplest idea in the world. So what are the points good for? Upgrading your avatar.
From anything to cosplay cats, to Bling Gorillas. 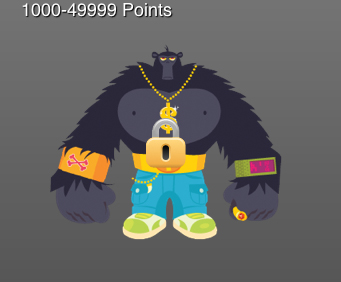 "What, you thought I made that up?"

Yes, the avatars are ridiculous and the point system is juvenile, one could call it "farmville for music dorks" But you know what? It's fun, and it has people paying more attention to the music being played, talking about music, and checking out NEW stuff. I'm a self described music nerd, and i've already found 12 bands I've never even heard of that I love. Plus the chat function means that you can expound about all of the banal minutia you'd like in regards to the song playing, what it means to you, or the absurdity of the entire situation. It's actually a lot more fun then it sounds.

So how addicting is this? Let's put it this way, the entire time I wrote this article I kept switching windows to interact with the crowd in my room, or "uprate" a song, or see what was being played. Much like an addict i've found myself saying: "I'm going to take a break from turntable.fm today", only to find myself back when I see some of my pals back in there. Staying for "one more round" or song. I can't help myself, it's too much fun.

I tend to stick to my room with my friends, but I've gone "touristing" around too. I got 20 awesomes, for playing the Didjits in a room full of punk kids from the deep south that had never heard the band before. I played some seriously awesome old Alice Cooper Band songs in a room full of classic rock freaks that had been to those shows. I've heard a jazz version of Voodoo Chile by jimi Hendrix by Gil Evans. I've heard amazing mashups of Vanilla Ice and Michael McDonald and I *HATE* mashups, but being around people that loved them made me love them more.

Top to bottom though, the best times I've had is just sitting around with a group of my friends. Either locally, or all around the country and just playing songs together, it's communal, it's contagious and it's damn fun. And it's centered around music, MUSIC not the cult of personality around it, or the pithy quotes that come with it... more than anything I have ever seen on the internet.

Are there downsides?
Sure... it sucks that you have to login with your facebook account, because it means some people who are distrustful of that site can't get in on the fun. It sucks because only people in the US can enjoy this service for now... sometimes the library is "wonky" at best and you end up with weird live versions of songs. Sometimes stuff just goes crazy and you have to reload the page or open in a new tab. But hey man, it's in Beta!

Also some rooms just play lame stuff (by this writer's standard), it's as good as the people in it. Meaning don't go bringing in your Coldplay and your Ke$ha over to *MY ROOM*. However, you can upload your own mp3s (which is an amazing feature! Other file formats would be nice too). And the integration with facebook means you can see where all of your buddies are at. So how could this be improved? Well, being able to customize the image of a room for starts, sweaty punk rock basement, huge arena, crazy dance club with flashing lights. The possibilites are endless.

Better avatars? Sure that'd be awesome. As it stands everything is pretty cartoony and kind of Japanimation looking. It'd be hard to explain if the CEO of your company busted you watching it.

So what's in store for turntable.fm? Well hopefully not a quick acquisition and inherent lameness to follow. Thus far the deal with Media Net has allowed them to stay legit from forces of the Empire, I mean... the RIAA.

There have been celebrity guest sets (such as: Sir Mix-A-Lot), Heck some savvy bands are even using turntable.fm to preview their new records.

The sky is the limit. For my money though, turntable.fm is the first application/website to do something with music that actually makes me feel hopeful about the future, and actually gets me listening in a way that other passive services don't. I seriously think, if it doesn't mess up too bad, it could end up "saving music".