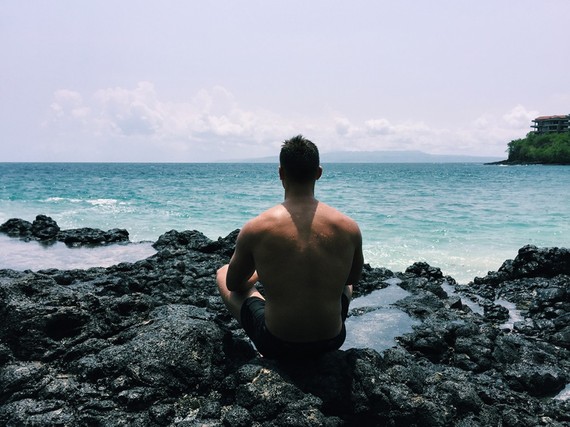 Visualizing my future and enjoying views of the Padang Bai beach, Bali, Indonesia.

Imagine it with all the details, how does it look, smell, sound, feel? What emotions you'd have, how would you look, what would you do? Make it as realistic as possible and truly believe into it. Practising visualization daily helps me stay on the track and know that it is inevitable, I've already been there and done that, now just need my body to get where my mind already is, the victory.

"The mind is everything. What you think you become." - Buddha

Visualization is a process of recreating all the images, sounds and feelings in your mind in order to practice in a perfect environment. Turns out, visualization is very popular in sports psychology.

As I was active in athletics for around a decade, I would watch videos of great athletes and analyse their techniques, I'd look at the pictures of pole vaulters and imagine myself doing the same movements jumping over the bar. Before the competition I'd imagine myself warming up, stretching and finally competing. I was visualizing without even knowing about it.

What is the difference between a good and great athlete? Their mental strength and power of visualization. One of the most overused cliches in sport is that 90 percent of performance is mental. According to Doug Gardner, sport is 100 percent mental.

"I am a big believer in visualization. I run through my races mentally so that I feel even more prepared." - Allyson Felix, 2012 Olympic champion, a 3-time World champion, and 2-time Olympic silver medalist.

Australian psychologist Alan Richardson made a little experiment. He took a group of basketball players, divided them into 3 groups and tested each player's ability to make free throws.

The first group would practice 20 minutes every day. The second would only visualize themselves making free throws, but no real practice was allowed. The third one would not practice or visualize.

The results were astounding. There was a significant improvement in the group that only visualized; they were almost as good as they guys who actually practiced.

In some cases, research has revealed that mental practices are almost effective as true physical practice and that doing both is more effective than either alone.

There are many benefits of visualization

Visualization process works as a form of relaxation as it reduces anxiety, with visualization there are no limitations, you can be and do anything, you can gain inspiration to pursue your dreams as you have already seen them happen, boost confidence and improve focus to work toward your goals.

One of the most mind-blowing benefits of visualization was discovered by Dr Maxwell Maltz. In his classic book Psycho-Cybernetics, he noted that your subconscious cannot tell the difference between a real memory, and a vividly imagined visualization.

"Your subconscious cannot tell the difference between a real memory, and a vividly imagined visualization." - Dr Maxwell Maltz

It may sound incredible and too much of an inception but when you visualize you effectively "implant" new memories into your self-image meaning that your subconscious mind "thinks" you are already the success you dream of being.

Start with a simple skill that you want to learn, like waking up earlier or eating slower. That way you can practice with something easier and strengthen your visualization skills before tackling the big complex skills.

A version of this post originally appeared at tomaslau.com.