Have scientists had volcanoes all wrong?

A popular theory has it that, at least in certain types of volcanos, eruptions occur when molten rock known as magma gushes up from deep inside the earth via narrow jets known as mantle plumes. But a new study of seismic data has identified one very big hole in the theory:

"Mantle plumes have never had a sound physical or logical basis," study co-author Dr. Don L. Anderson, professor emeritus of geophysics at Caltech in Pasadena, California, said in a written statement released by the university. "They are akin to Rudyard Kipling's 'Just So Stories,' a reference to the British author's tales offering silly explanations for how giraffes and other animals got their peculiar anatomies." 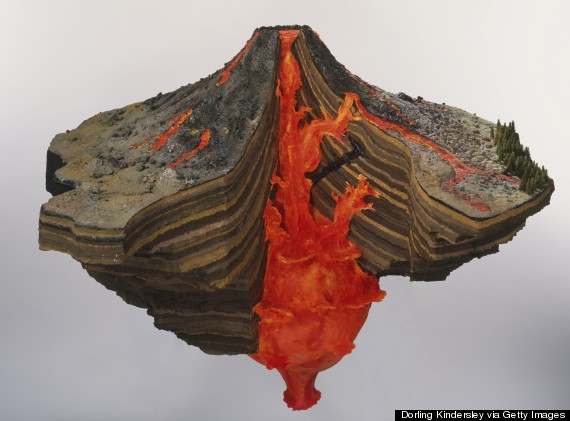 This illustration shows the upper part of a volcano. Scientists have long hypothesized that 'pipes' of molten rock (magma) extend to the Earth's core, but new data suggest they don't actually exist.

Mantle plumes were first hypothesized in 1971 and widely adopted among geologists around 1990, Anderson told The Huffington Post in an email. But despite significant research activity over the past couple of decades, the seismic data available to researchers were too spotty either to prove or disprove the existence of the plumes.

According to the new study--co-authored by Dr. James Natland, a professor emeritus of marine geology and geophysics at the University of Miami--robust new data and improved theory show once and for all that those plumes are nowhere to be seen.

So if magma plumes aren't sending molten rock to the surface, how does it get there?

Via gigantic "chunks" of mantle that rise toward the Earth's surface, according to the new theory. These upwellings aren't narrow but can be thousands of kilometers across, Anderson said in the email; as heat from inside the earth pushes them up, narrow channels of cooler material called slabs sink.

"This is a simple demonstration that volcanoes are the result of normal broad-scale convection and plate tectonics," Anderson said in the statement.

But if you're thinking the new study might improve our ability to predict when eruptions will occur, you're in for a disappointment.

The new research "does not have any connection to the timing of volcanic eruptions," Anderson said in the email. "It is an important step to understanding how the Earth has cooled and changed since its formation."

The study was published online September 8, 2014, in the Proceedings of the National Academy of Sciences.