There are no magic words to solve the problems of immigration in the US or drug-related violence in Mexico. Instead, I offer one incontrovertible conclusion regarding the borderlands: the Wall will not work.
Here's why.

Because the Border Has Long Been a Place of Connection

The borderline is a permeable membrane connecting two countries. The inhabitants of this "in-between" territory thrive on cross-border exchange and collaboration, both of which have flourished for many centuries. There are strong senses of mutuality and attachment to territory among border residents.

Throughout time, many great dramas have been played out along what is today the border zone, including cataclysmic invasion, war, and revolution. The current afflictions in this troubled geographical vortex pertain to immigration and drug wars. The region has survived past upheavals, and will undoubtedly outlast the present woes.

A principal reason why border tensions are today so intense is that neither the migration nor drug problem has its origin in the borderlands. Instead, they originated from outside, and borderland communities have limited capacity for self-determination in these matters. At the national level, the US and Mexico each stand to gain from the sacrifices of that small subset of their populations that resides in the border zones. These are the people who must endure the exogenously-induced threats, with little assistance from their national and local governments beyond military and police actions. In the meantime, they have made what adjustments they can: some people have left , tired of the stresses and dangers; others simply await the future.

Because People Always Find Ways over, under, through and around Walls

As long as migrants hold onto an American Dream, and as long as Mexican labor is required in the US, people will cross the border with or without papers. Walls don't work simply because people are too inventive in circumventing them.

As the land border tightens, more people go around it by sea. The waters off San Diego have seen a doubling in the number of sea-borne undocumented migrants in recent years, plus a seven-fold increase in drug seizures. Going under the border line is an increasingly popular option. Since 2008, almost 70 tunnels have been discovered connecting Mexico to the US, mostly in California and Arizona. Some stretched for over half a mile, revealing elaborate lighting, drainage, and ventilation systems, and even rail tracks and elevators.

The old-fashioned method of going over the fence remains popular, because even the most sophisticated barrier has weaknesses. The vehicles of some border-jumpers have been rigged with custom-made roof ladders that can be extended as ramps over a fence to allow easy passage of vehicles. Climbers have perfected the use of hand-held screwdrivers to scale steel-mesh barriers that were designed to inhibit hand- and toe-holds. Migrants with a bit more time remove panels in the fencing and carefully replace them after passage; some employ gas-powered leaf blowers to erase their footprints once they cross. By 2009, there had already been over 3,000 breaches in the fence, costing $4.4 million to repair.

If all else fails, border-crossers still bluff their way through official ports of entry. Some inventive smugglers hollowed out the seats in their SUVs and re-covered them with a migrant hidden inside. Others have crossed with a small child wrapped inside a piñata (a kind of large doll). Those with a professional interest in shepherding an illicit cargo through a check point will employ spotters and corrupt inspection officers to schedule their delivery without interference.

Because Governments and Private Interests Continue Opening Portals in the Wall

As the US government moved to seal the border, it was simultaneously increasing the number of sanctioned portals in the Wall. The term "port of entry" (POE) usually refers to a collection of facilities that regulate movement into and out of this country at vehicular, rail, air, and sea ports. The chief attractions of opening more of these "gates" in the Wall are related to increasing trade and reducing congestion at the aging POEs in downtown locations. Local governments are also seduced by the tolls they can collect from POE users, and regard POEs as a stimulus to economic growth. In some out-of-the-way places lacking POEs, consideration is also being given to reopening the informal border crossings that were closed after 9/11.

International relations between Mexico and the US simply could not exist without these communication portals--private and public, formal and informal, real and virtual. The most interesting (but little known) example is the "International Boundary and Water Commission, United States and Mexico," (IBWC). The IBWC originated under Article V of the 1848 Treaty of Guadalupe Hidalgo and was established in 1889. In Mexico, the equivalent agency is the Comisión Internacional de Limites y Aguas (CILA). Both are charged with jointly implementing the international boundary and water treaties and settling disputes along the border.

Because Walls Always Come Down

The Wall separating Mexico and the US will come down. Walls always do. Partition is the crudest tool in the armory of geopolitics, an overt confession of failed diplomacy.

What should be done about the Wall that so rudely interrupts the third nation? The Berlin Wall was torn down virtually overnight, its fragments sold as souvenirs of a calamitous Cold War; the Great Wall of China was transformed into a global tourist attraction. Left untended, the US-Mexico Wall would collapse under the combined assault of avid recyclers, souvenir hunters, and local residents off ended by its mere presence. Nevertheless, we should preserve sections of the Wall to commemorate that fraught moment in history when the US lost its moral compass. 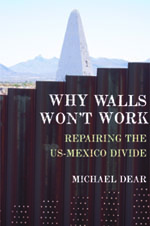