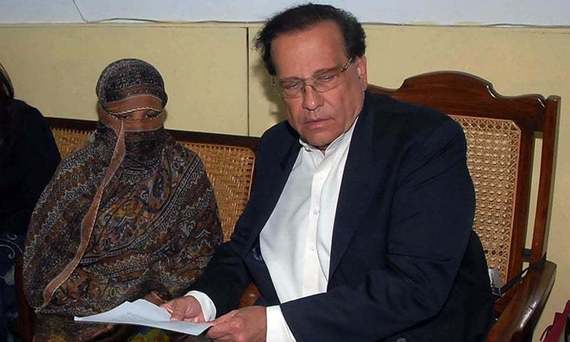 Right now Pakistan is once again in the news related to its controversial anti-blasphemy law. Shaan Taseer, the son of late Salman Taseer is in hot water after posting a video message in which he condemned Pakistan's blasphemy laws and tried to show solidarity to its oppressed Christian minority.

After seeing the message the religious community is calling for his arrest. Some have gone even further and have started to incite violence against him. Pakistan over the years has become so bizarre that now even criticism against a man-made law has assumed the status of blasphemy.

Shaan Taseer is now facing similar risks which his father, the late Salman Taseer, had faced after criticizing the blasphemy laws. If these religious zealots are not controlled, I fear that he may end up sharing the same unfortunate fate of his father.

His father, Salman Taseer, a politician and Governor of Pakistan's most populous province Punjab, was an outspoken man and was murdered by Mumtaz Qadri, his own security guard, for speaking in favor of repealing Pakistan's controversial blasphemy laws, according to which a person found guilty of blasphemy can be sentenced to death. Salman Taseer had also asked for official pardon of an illiterate woman, Aasia Bibi, who had been sentenced to death by Pakistani courts after being found guilty of blasphemy.

However, even this humane gesture was construed as blasphemy by the religious lobby and they started to agitate against him. The drop scene finally came when Qadri, his own guard, shot him and surrendered himself to police.

Later, in embarrassing scenes which have been permanently ingrained in the memory, he was showered by rose petals. After Qadri's arrest he went to court where finally he lost his appeal. He was executed on 29th February 2016 and his funeral was attended by millions. 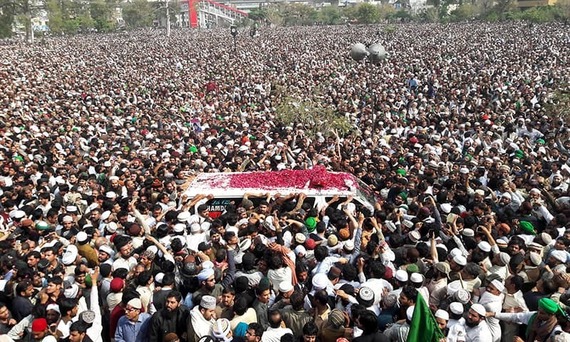 But why did it happen? Why did Qadri shoot Taseer, and why was he subsequently showered with rose petals? Why was his funeral was attended by millions despite the fact that he cowardly murdered a person he was supposed to protect?

And why is Shaan Taseer, son of the late Salman Taseer being threatened so openly and the state is literally helpless to offer protection. In fact, the only thing it has done so far is to register a case of "hate speech" against him rather than against those who are threatening him!

To some extent the murder of Salman Taseer happened due to the extreme reverence attached to religion and the Prophet (Peace Be Upon Him). Outright religious fanaticism is of course responsible and perhaps the only cure in the long run is desensitizing people from religion. I will not dispute this obvious reality.

But this only partially explains the complex situation. Reverence alone does not lead men to commit murders. It is what the society explicitly or implicitly expects with respect to actual demonstration of reverence (particularly when the revered figures and symbols are perceived to be under attack) which often leads to adoption of a particular action.

These expectations are not always spelled out clearly but nevertheless articulated through loaded slogans and narratives which project some real life individuals as heroes and villains.

Extremely pervasive and loaded slogans in Pakistan like "Hurmat-e-Rasool per Jaan be qurban hai" (for the honor of the Prophet (PBUH) we are ready to sacrifice our lives) actually expect that the honor of the Prophet (PBUH) should be protected even if one has to give their life. Slogans such as these become extremely dangerous with respect to their potential impact. I am not saying that they affect every person in the same way, but it merely takes one individual to get affected in "that" way to do the unthinkable.

Moreover, such slogans and the related literature also lowers the threshold of the desired level of "reverence," as that line where so-called blasphemy starts, becomes blurred, and is eft for the individuals to simply decide what they consider as blasphemy.

I think this is important because such acts are often committed for personal glorification which the society is willing to bestow on such individuals. Yes, Mr. Qadri courted possible death when he fired upon Taseer but he also looked towards widespread hero worship and "immortality' in the similar vein of Ilm-ud-Din ( a hero for some Muslims) who had killed had stabbed a Hindu in 1929 on publishing a supposedly blasphemous book which had contained derogatory remarks about Prophet (PBUH). He was tried in court and hanged but over time has achieved a legendary status.

His act was subsequently glorified and his legacy has been immortalized in the following words of Iqbal, the national poet of Pakistan: "This uneducated young man has surpassed us, the educated ones". The narrative around Ilm-ud-Din is that he did the right thing and today he is highly respected. This, in my opinion, is a dangerous narrative as it is projecting the wrong kind of heroes.

In a society where Ilm-ud-Din has been made into a legend and a "Shaheed", the murder of Salman Taseer is hardly a surprise. Mumtaz Qadri, in his head was going to heaven and on his way to attaining the same legendary status when he fired shots at Salman Taseer, despite the fact that the latter had only asked for a presidential pardon of an illiterate woman accused of blasphemy. And yet Mumtaz Qadri took the decision, a calculated one, and literally got away with it. And the subsequent showering of the rose petals demonstrate that he was not wrong in his calculations.

No society is monolithic, as it is composed of numerous individuals and has so many cultures and sub cultures. It would be totally wrong for me to say that actions of Mumtaz Qadri were supported by all and he is a universal hero. I know that many hated his act. And many of those who did not support his act were devout Muslims. I personally talked to many and found that apparently a large number was utterly shocked by Mumtaz Qadri's act.

However, those many never came out to protest. Immediately after his act, it was the Islamists chiefly belonging to the Brailvi sect who thronged the streets. And they were celebrating and threatening that any review of the controversial blasphemy law would be met with severe resistance.

The vigil which was organized by those protesting Taseer's murder barely attracted a few hundred and those who attended look so different from the rest of Pakistan. The size and the appearance of the crowd contrasted so much from the processions of the "other" side. There could be no greater disparity between the two groups.

So-called moderates may be more, but it is the hardliners to whom the street and the weapons belong. And by the word "moderate" too is relative to hardliners only. If we start judging with respect to Western standards then an overwhelming majority is hardliner.

We need to reexamine the narratives here about people like Ilm-ud-Din. Why do we try to narrate the story of men like Ilm-ud-Din in a consecrated manner? By such narrations, we may not be converting the entire population into fanatics but nevertheless a critical mass is getting "motivated," and all the hardliners need is that critical organized mass which is ready to even adopt violence.

In the end, I would like to make a humble plea to all my Muslim brothers and sisters.

When you kill in the name of Prophet Hazrat Muhammad (PBUH) then you are portraying Islam and his legacy in an extremely wrong way. The world will, and in fact already is, judging Islam by the way Muslims behave in the name of Islam. If we want the world to consider Islam as a peaceful religion then remember to act in such a way. Being violent, endorsing violence, giving apologetic defense to violence and then also demanding that world should not "stereotype" Muslims and consider Islam as a religion of peace won't work.