The astonishing headline last month that medical errors are the 3rd most significant cause of death in the USA -- at an estimated 251,000 per year -- led to massive media coverage. I wrote about it for my typically integrative health and medicine oriented readers in In Defense of "Alternative Medicine". Interest is high. Audiences seem to be ready to try and digest what these horrible data mean. 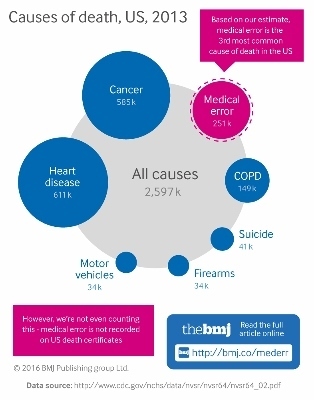 Yet the storm of reporting and commentary obscured a fascinating side-question. Why were these data about the medical industry in the United States of America published abroad, in the British Medical Journal?

The question bugged me. So I went to the article to find information on how to connect with the paper's corresponding author, Martin "Marty" Makary, MD, MPH. Makary is a surgical director at the esteemed Johns Hopkins Multidisciplinary Pancreatitis Center. He's got his own Wikipedia page.

I sent him a query. Why BMJ instead of JAMA (Journal of the American Medical Association) or NEJM (New England Journal of Medicine) or Health Affairs? 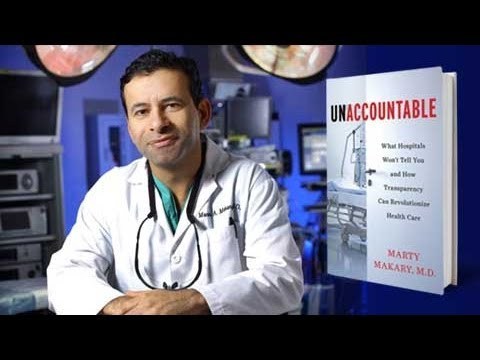 I got no response the first query. I waited 3 or 4 days and wrote back, reminding him of my initial query, and that I remained interested. Makary is a writer of columns in the Wall Street Journal and elsewhere. He is the best-selling author of 3 books, including Unaccountable: What Hospitals Won't Tell You and How Transparency Can Revolutionize Health Care. He's a busy guy.

He then responded with a one-liner -- below -- such as one writes while quickly parrying a stream of e-mails. I read it and quickly wrote back. Did he recall that I was press? Did he remember that I'd like to report his response? Journals can be vindictive. I guessed that his response would not be taken to reflect well on the journals and the judgement of the editors. He gave me the go-ahead. Here is Makary's response:

NEJM said not relevant to practicing docs. JAMA said pass. So we went to next highest impact journal [in] medicine.

How did the editors of these journals make these decisions? I wrote to the media specialists for each, asking for clarity on why they decided as they did. Journals pay attention to their impact factors. This paper was likely to get some significant play. The communications person for JAMA wrote back within a half day. He stated their policy that JAMA doesn't comment on review processes. As a new journal editor, I find this totally understandable. I did not hear from NEJM but assume that the same policy holds. 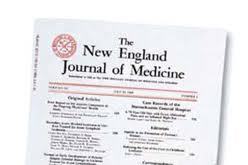 Not relevant? Pass? With no guidance, here is some speculation on what might have motivated the decisions. Perhaps the journals believed Makary's work is not new news - a ho-hum repetition. After all, in 2013 researchers from the Leapfrog Group published an estimate that ranged from 210,000-440,000 medical deaths per year. A famous 1999 Institute of Medicine report, To Err is Human, put the number at 98,000.

This is hardly a chorus of repetition. One wonders how many repeat studies are published, for instance, on a routine beta-blocker? If the news is old hat, it certainly came as a shock to many members of the media and the public. Might one reasonably assume that a decent percentage of the 850,000 plus "practicing docs" and 1.4 million nurses have yet to fully allow this information into their spirits and perhaps into motivating themselves to change the way they practice?

Maybe the disinterest of the journals was personal. Makary, through his writing, was already known for challenging the industry for its poor safety record and non-transparency. Perhaps they are denigrating him and cutting him off -- sterling Hopkins credentials be damned -- as a mere publicity seeker.

I am making this up. Because I need to make something up to understand why neither of the journals took the study. I previously published what I learned from Makary on my own social media site. Responses were quickly of disbelief and accusation, and then a kind of confirmatory sigh. What else should be expected of an industry gone so awry?

That's stupefying resignation, not aligned with a can-do self image. What will it take for the medical leaders of the $3-trillion industry to once again comfortably breath in the first pledge that they ever made: Primem non nocere. First, do no harm.