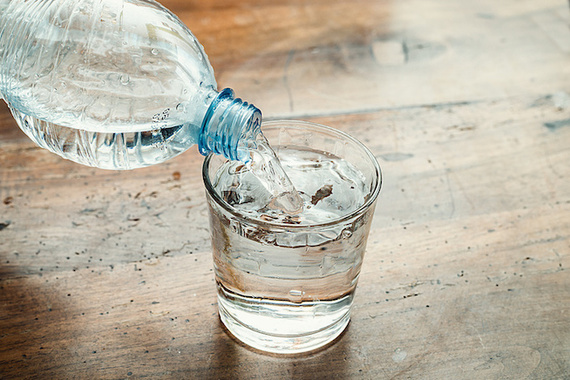 Water is the most essential nutrient for life, so why are we always forgetting about it?

According to the new Dietary Guidelines for Americans, what you drink is important for your overall health, even though most people don't pay much attention to the calories they're slurping down. And this may turn out to be a costly move -- consuming too many calories from beverages may increase your risk for heart disease, type 2 diabetes, and weight gain.

Check out these startling statistics from the Dietary Guidelines for Americans: beverages with added sweeteners -- think soda, gourmet coffee drinks, energy drinks-- now account for half of all the added sugar in a typical diet. The average adult drinks 20 percent of her calories -- significantly more than the recommended limit of up to 10-15 percent of total calories. That amounts to a limit of 200-250 calories daily for most women and around 300 calories for men.

Fortunately, there's some good news: turns out, we're skipping sugary sodas more than ever these days, while sales of bottled water have more than doubled since 2000, according to data from the Beverage Marketing Corporatation This change has slashed up to an estimated 68 trillion calories from the U.S. diet between 2000-2015. Teens also appear to be losing their taste for sugary beverages. Data from the Centers for Disease Control and Prevention reveal that 20 percent of teens reported drinking one or more sugar-sweetened beverage in the last day, compared to 27 percent in 2013 and 34 percent in 2007.

Here are six great reasons to make H20 your beverage of choice.

You'll Slash Your Sugar Intake
About half of all the sugars in our diet come from sugar-sweetened beverages like soda, energy drinks, sweetened coffee and tea beverages. Replacing just one 12-ounce (140-calorie) soda with water each day is one of the healthiest swaps you can make -- and it would cut more than 65 cups of sugar from your diet in a year. Now that's sweet!

You'll Sip Yourself Slim
Several prominent studies indicate that a "water diet" is effective for weight loss. People who drink more water (and fewer calorie-containing beverages) have lower-calorie diets. Opting for water in place of a 150-calorie beverage each day would help you shave 1,000 calories per week, which adds up to a loss of about a pound per month.

It's not just about replacing a calorie-containing beverage with a calorie-free sip. Drinking more water may also help you eat less. One study found that dieters who drank 16 ounces of water before their meals lost about five pounds more over 12 weeks than dieters who didn't drink water before eating. While another recent report showed that people who took in too little water daily had a 50 percent greater risk of obesity compared to those who were well hydrated. Make sure you drink water for at least half of all your daily beverages (five or more servings) to limit liquid calories.

It Will Up Your Game
Water is the ultimate performance-enhancer. In fact, the ingredient in sports drinks that has the biggest effect on your workout is water -- H2O helps regulate your core temperature and maintain blood volume. Without adequate water, your muscles will fatigue, your heart rate will increase, and your performance will suffer. To get the most out of your workouts, be sure to drink plenty of water before, during, and after exercise. (If you're exercising for more than 90 minutes continuously, the carbohydrates and electrolytes in sports drinks are recommended.)

Your Overall Diet Will Improve
Experts don't know why healthier beverage choices translate to healthier food choices, but research shows the connection exists. A recent study of more than 18,000 US adults found that drinking more water not only reduced calories, but it was also associated with a lower intake of total fat, saturated fat, sugar, sodium, and cholesterol.

You Skin Will Appear Healthier
Your skin is your largest organ, and it's made up of 72 percent water. So it's probably no surprise to hear that hydration is essential to keeping it healthy. While drinking more water won't erase wrinkles, being well hydrated may improve your skin's appearance. Even slight dehydration can make your skin appear dry and dull, which could make wrinkles more prominent.

Registered Dietitian, Author, and Co-Founder of Appetite for Health