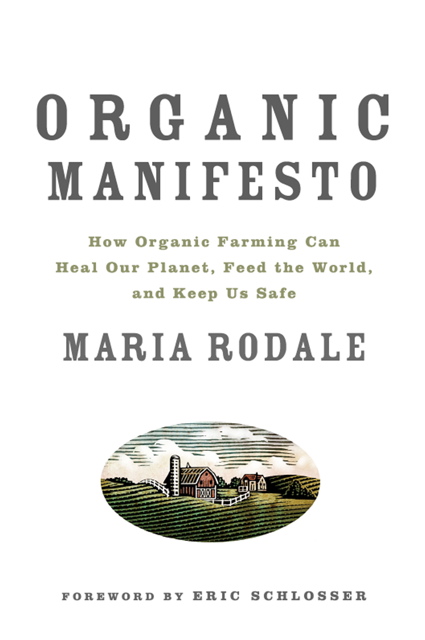 "What is wrong with us? Why do we seem to care so little about our own safety, our own health, and the future of our children?" asks Maria Rodale, farmer, author and CEO of Rodale Inc. "Why are we willing to pay thousands of dollars for vitro fertility treatments when we can't conceive, but not a few extra dollars for the organic food that might help to preserve the reproductive health of our own and future generations?"

In her powerful and informative new book, Organic Manifesto: How Organic Farming Can Heal Our Planet, Feed the World, and Keep Us Safe, Maria Rodale has done all of the thinking and the research about organic farming for us. Yay, we don't have to think! Following in the path of her grandfather, JI Rodale, who launched Organic Gardening and Farming magazine in 1942 and her father Robert Rodale, who devoted his life to educating others on health and environmental issues, Maria Rodale explains why and how we must immediately begin to undo the damage we have done to the environment and to ourselves.

The 'Farming System Trial' that her father, Robert Rodale began in 1990, is now the longest running scientific study comparing 'synthetic-chemical' versus 'organic' agriculture. After 20 years of experiments, the trial clearly shows that organic farming is not only more productive than chemical farming, especially during times of flood or drought, but that soil farmed organically is a necessary step toward solving our climate crisis. 'Mycorrhizal fungi' which grow at the roots of plants, stores carbon. These miraculous fungi build our soil and its health while also sequestering excess carbon and pulling it underground.

Tada! Billions of beneficial microbes found plentifully in healthy organic soil do not exist in conventionally farmed soil because synthetic chemicals (pesticides, fungicides, herbicides, etc...) eradicate them as well as their useful creepy-crawly cohorts. As a result a conventional farmer is left with soil that has weakened microbial life, a compromised structure and a significantly impaired ability to withstand the stresses of drought and flood. In organic farming, soil is constantly being replenished and revitalized by adding compost or growing cover crops. It's a 'give and take' approach; a happy, healthy long-term relationship, while chemical (conventional) farming is more 'crash and burn' or 'hit and run.' That's so 1980's!

"The fact that we haven't noticed these little helpful creatures before shouldn't surprise us. We prefer our nature in the macro-the postcard vistas and views. When it comes to the micro, we'd rather not look or know," says Rodale. " We know more about space than we do about the ground we live on, about the soil that sustains us. What we call soil is a living thing: Just one tablespoon of soil can contain up to 10 billion microbes-that's one and a-half times the total human population." Try wrapping your head around that fact.

Rodale makes a convincing argument for moving from conventional farming to organic farming, which at the present time constitutes less than 1% of farming in the United States. Rodale writes, "Cheap food equals high healthcare costs." She cites various studies showing that some organic foods are higher in antioxidants and that organic foods are safer simply because they're grown without dangerous chemicals, antibiotics or contaminated sewage sludge. She also refers to recent medical studies that show that even small doses and cumulative small doses of agricultural chemicals can be just as toxic as large doses. Government regulations are based on 'estimated safe amounts' of exposure. Harvard-trained, Dr. Philip Landrigan, professor of pediatrics at the Mount Sinai School of Medicine and Chairman of the school's Department of Preventive Medicine agrees. "There are no safe limits,' says Landrigan. "No matter how small. The biggest bang for the buck still occurs at the lowest doses. If babies are exposed in the womb or shortly after birth to chemicals that interfere with brain development, the consequences last a lifetime."

Rodale's tone, part scientific-part reassuring MOM, is encouraging even when she's swinging depressing statistics on the effects of water pollution from chemical farming; alligators' penises shrinking, male toads turning partially into female toads and reproducing, or the disappearance of honeybees and fireflies. All of this sadly reminding us that they are our canaries in the coal mine.

"It takes fuel to ship food around the world. And nearly every chemical fertilizer is petroleum based," says Rodale. " Chemical and Biotech companies still claim there is not enough food to feed the world. They spend billions of dollars each year on advertising and lobbying in order to drive that point home. Yet the problem isn't food scarcity-it's too much food- but fear of famine sure sells chemicals."

Current agricultural use of pesticides in the United States is estimated to be about 1.2 billion pounds annually-about 4 pounds for every man, woman and child. 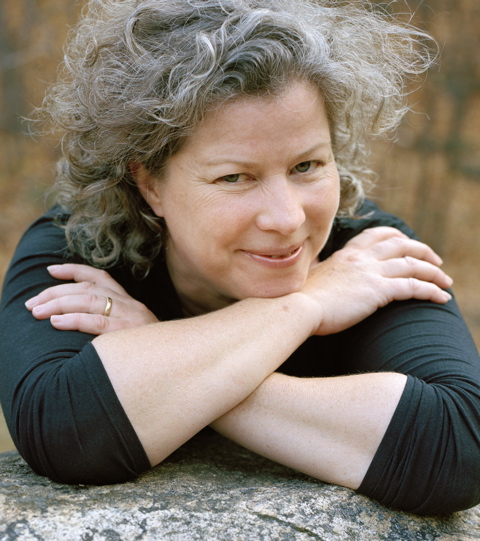 Organic Manifesto has come along at a pivotal time. In California, residents are speaking up against aerial spraying of pesticides in their cities to combat a minor moth (LBAM) which many leading entomologists consider an insignificant pest. In New England, director Brett Plymale recently released A Chemical Reaction, a documentary about the first Canadian town to ban pesticides. And New Jersey's Senator Frank Lautenberg is currently drafting legislation to strengthen the Toxic Substances Control Act, which at the present time is considered arbitrary by many environmental experts. This revision would require stronger safety testing and oversight of the 80,000 chemicals registered in the United States. Maria Rodale asks that we stop supporting a food industry that is poisoning us, and demand organic; for everyone. "Let this book be your cocktail party guide to global organic conversion, no spin included-just the facts," says Maria Rodale. "And maybe a few opinions thrown in for good measure."