After weeks of witnessing disturbing events that exemplify how angry, vindictive and dangerous humanity can be when it turns on itself, Mars -- as an escapist adventure situated enticingly in our near futures -- looks great in comparison.

Human exploration and eventual habitation of Mars is often described as the ultimate do-over, the proverbial slate wiped clean, a place where we can make a fresh start. When we get there, we will experience the unblemished purism of a new world and will have unprecedented opportunities to pursue science, increase our knowledge of the universe, extend our species beyond our native planet, perhaps even to preserve the human race if something untoward happens to our home planet Earth.

Yes, we may die trying (Musk seems pretty certain of this). It may take the next few decades to do it successfully (NASA's road to Mars is a long meandering one). We may adopt altruistic values and a commitment to off-planet diversity and get near-laughed off the playing field for spending too much time selecting the humans and not enough raising the money or acquiring the tech (Mars One).

The drive to get humans to Mars is real. Plans are afoot. Odds of success are being calculated. Money is being spent. Gobs of it. The primary emphasis is on the hardware needed to get there: sturdy conveyances, unfailing life support systems, radiation shielding and robust boosters to get the whole thing off the ground. We calculate our readiness factor on advancements in technology, while paying much less attention to the minds and spirits of the fragile humans who will be on board.

After a successful journey, safe landing, and initial check that pre-constructed habs and life support are operational, the forced unity and self-discipline required by a pressure-packed mission will begin to dissipate. Eventually, as more humans arrive, more infrastructure is put in place, and day-to-day survival becomes less stressful, some sort of social fabric will emerge. Will humans on Mars mirror and eventually become as divided and destructive as their Earthly counterparts? 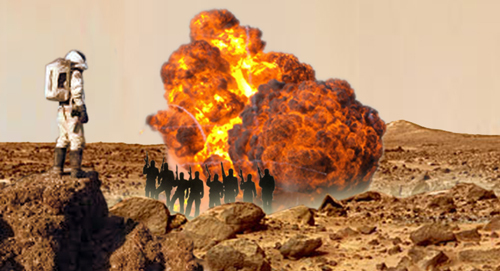 Will Mars become another Earth? (photo collage by author)

Susan Ip Jewell is an L.A.-based physician whose organization "Mars Without Borders" seeks to prepare humans for off-world exploration, primarily via "analog experiences" in Mars-like environments that are not so difficult to find on Earth. She's done numerous stints at the Mars Desert Research Station in Utah and is preparing for an even longer stay at the Flashline Arctic Research Station. 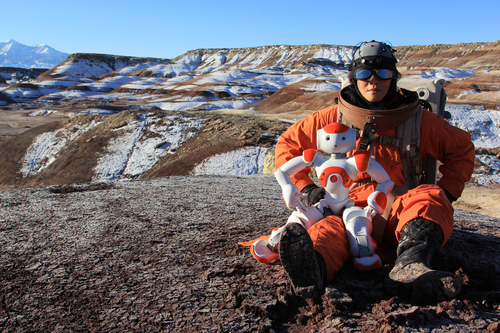 Jewell insists we look at future space exploration -- and eventual human habitation of Mars -- as an opportunity to address the issues that divide humans on Earth. "We are so fractured, we are so disconnected from each other as a human race right now... How do you expect us to succeed on another planet?"

In an interview for the documentary Madame Mars: Women and the Quest for Worlds Beyond, Jewell describes the borders humans have constructed on Earth: geographical, political, cultural, belief-driven, racial and gender divides. "Earth normal" is distrusting those who are different from us. Our social values are built on divisiveness, not unity.

Clearly this won't work on Mars. Jewell argues that a successful human mission to Mars and other deep space destinations will depend on a "space without borders."

"If we have borders when we go out beyond space," Jewell said, "we would just replicate the disastrous systems that we have here on Earth."

Those who seek opportunities in distant lands are often trying to escape the difficulties or challenges disrupting their present-day lives, in favor of finding a better life elsewhere. If Mars represents a better life -- even one with intense radiation, blood-boiling atmospheric pressure, frigid temperatures and global sandstorms -- we need to ask ourselves, will those who settle on Mars still be better off than if they'd stayed on Earth?

Most debates to date over governance on Mars suggests the settlers will build their own society from within, develop and institute their own rules of behavior, and set up a way to settle the inevitable disputes. As much as all of humanity will be pulling for these first off-Earth settlers to succeed, many retain a nagging doubt over whether this will be possible. Humans may not be ready for Mars.

Before we climb on the expertly constructed spaceships, before we breathe the artificially generated air or reconstitute the dried packets of astronaut food, we need to repair the mental constructs that create Earth-based boundaries that have led to hatred of others, warfare, terrorism, subjugation of entire races or genders.

Before we go to Mars, certainly before we soil another planet, let's reframe the human associations we live with daily, with an eye toward how we will represent our species when we travel to other worlds. Let's do anything we can on Earth to boost our own confidence that humans will succeed when they put their off-Earth lives together and build communities on a whole new planet.

The early Mars settlers will be us, but they do not need to be like us.