On Friday, the New York Jets signed Michael Vick to a one-year contract worth $5 million. His return on that investment is unknown, and frankly I don't care. 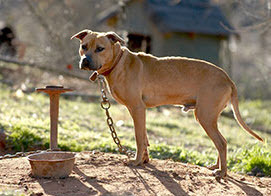 Vick is free to do as he pleases both on the football field and off. But one thing he can't do is absolve himself of his direct participation in horrific and fatal animal torture and abuse. And whether he takes our home team to the Super Bowl or spends the season riding the pine, we're not obligated to forgive, and it's essential we don't forget.

History bears repeating: The Michael Vick investigation began in April 2007 with a search of Bad Newz Kennels, located on Vick's Virginia property. We at the ASPCA were involved early on, assisting in the recovery and analysis of forensic evidence from Vick's property, including carcasses and skeletal remains of numerous dogs.

The ASPCA also led a team of certified applied animal behaviorists in behavior evaluations of the rescued dogs, making recommendations to the USDA and US Attorney's Office regarding the dispositions of the dogs.

It became clear over the course of the investigation that this was not a crime of passion or a case of obliviousness. Michael Vick was fully involved in a six-year pattern of illegal activity that included dogs being savagely electrocuted, drowned, and beaten to death.

We fully acknowledge Vick has "done his time" and even participated in some public outreach, but that does not erase the crime.

We're not motivated simply by a desire to see Vick further punished. But dog-fighting participants and spectators -- including veterinarians, coaches, lawyers, judges and teachers -- carry a shame that is critical to the blood sport's demise.