In a move that caused virtually no ripple at all in the TV biz, FX canceled The Bastard Executioner this week.

We won't say FX was in a hurry to get this done, but the TV screen was still glowing with the closing credits of the last episode when the network swung its own execution ax.

And we all would have pretty much forgotten it already except that The Bastard Executioner did come with a pedigree: It was Kurt Sutter's followup to the acclaimed and quite wonderful Sons of Anarchy.

So what most fans are really doing is waiting for him to return to that world, which he has said he's about to do. The Bastard Executioner was an intermission, a chance for fans to get up and stretch their legs while they wait for the real show to resume.

Because Sutter put a lot into The Bastard Executioner and the story clearly meant something to him, it's worth taking a moment to ask what went wrong with this one after what he did with Sons was so right. 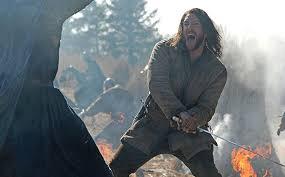 That answer turns out to be simple. The Bastard Executioner wasn't particularly compelling, we didn't love its characters and it didn't have many viewers. Those are difficult factors to overcome in the TV game.

Sutter knew it, too. Not only did he tell Variety last week that the ratings weren't hitting the necessary mark, but he gave the final episode a soft landing.

That's significant because Sutter doesn't do soft anything. But after infusing the season with his usual quotient of violence and fury, he ended the story in a way that was redemptive and almost gentle.

It had a no-hard-feelings aura to it, as if Sutter and FX had tried and this time it just didn't work out.

One could also make a solid guess that both Sutter and FX already had one eye on the future, in which Sutter has already said he will be heading back into the Sons of Anarchy world with a prequel and a spinoff.

The prequel would go back to the Vietnam era and explore how John Teller and Piney created the Sons motorcycle club in the first place.

Sutter says he envisions it as a one-off, 10- or 12-episode closed-end series, but does anyone want to bet whether that notion could expand if it's a hit?

The spinoff would focus on the Mayans, the Mexican-American motorcycle club that figured prominently in Sons.

As for The Bastard Executioner, let's gently suggest it might not have made it onto the air at all if it had been proposed by someone other than Sutter.

When a creator brings a gift like Sons of Anarchy to a network, the network will bend over backwards to keep him in the fold for future projects.

If Sutter had proposed a drama based on arguments in an elementary school lunch line over whether the chocolate pudding was better than the apple cobbler, FX probably would have put it on the air.

That's not because FX is dumb. On the contrary, FX is one of the smartest networks on television. Even its ratings flops, like Terriers, have often been good shows.

But once a creator has scored a hit, the network will tend to trust him, or her, if the follow-up project seems potentially viable. For one thing, almost anything that creator does should theoretically draw some viewers just based on his or her brand.

Sutter said he wrote The Bastard Executioner in significant measure because it was so removed in time and theme from Sons. He didn't want viewers to think he was doing a warmed-over reprise, and that's good thinking.

But audiences weren't that sold on a 14th century drama with an unknown lead actor, Lee Jones, who was an accomplished performer, but didn't have the charisma that Charlie Hunnam brought to Jax Teller in Sons of Anarchy.

Followup projects have that problem a lot. After Vince Gilligan's Breaking Bad became such a phenomenon, CBS scarfed up a show he wrote a decade earlier, Battle Creek. It lasted only 13 episodes.

Maybe The Bastard Executioner will serve in the end as a possible answer to this perennial question: If a TV show is canceled in the forest and no one had been watching it, was it really on TV at all?