We didn't finish the first one yet. We just abandoned it.

"Nearly five decades ago we had the ability to extend ourselves into the solar system and beyond," Stephen Petranek says in his new TED book, How We'll Live on Mars. "We simply have not chosen to pursue the opportunity."

These days we talk about human missions to Mars as if a new type of space race has begun, one clearly distanced from the original space race by a good 40 or more years, a race we here in the US of A believe we won, because we sent astronauts to the moon.

What if the original race never ended? Abandoning a race that continued without us is "winning" only as Charlie Sheen would see it: a blinders-on, super-subjective judgment with no basis in reality.

When the Apollo missions ended in 1972, we had the tech, we had the money (it only had to be properly appropriated), and after the wild success of the moon missions, we certainly had the momentum. Why didn't we keep going? 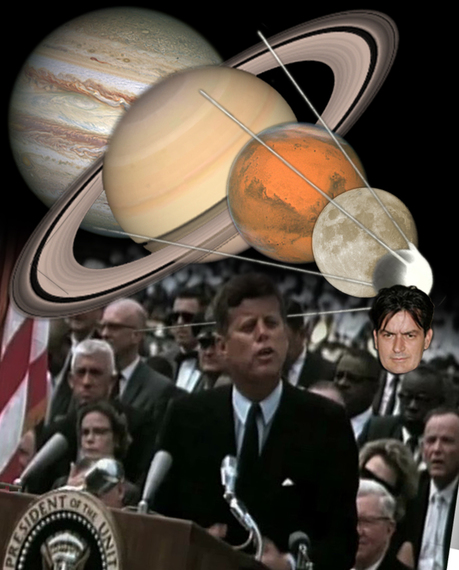 Petranek lays the blame for Americans not already being on Mars squarely on Richard Nixon, who not only grounded the Saturn V, the only rocket we had at the time that could have gotten us to Mars, but also opted to build the space shuttle fleet for near-Earth exploration rather than to expand existing plans to send astronauts to Mars.

The space shuttle was expensive and occasionally lethal; mothballing this fleet was supposed to free up some cash we could use to design and build a new spacecraft, only that hasn't happened, and now we have to purchase multi-million-dollar tickets to reach the ISS. In sustainable human space exploration, Americans clearly have not kept competing.

It's time to reframe the original space race as a more expansive quest that began long before the USSR's Sputnik launch in 1957 and did not end when Neil Armstrong stepped onto the moon in 1969. Both were significant achievements, but both can also be seen as markers along a longer route, each one creating a sense of accomplishment - but never signaling completion.

The original space race was never as simple as winning a hard-fought contest between two long-time antagonists. The contest was then, as it is now, about gaining another foothold on a never-ending ladder leading onward and outward, a quest that will ultimately involve many more of the world's spacefaring nations (both current and wannabes), as well as international groups like Mars One, not to mention private organizations headed by visionary CEO's with money that transcends any governmental or budgetary constraint.

Today's quest is less about reaching the moon or even Mars, more about building on each success in order to reach a more distant goal. An outpost on the moon leads to Mars. Established colonies on Mars lead to eventual deeper space missions that will send humans to explore the moons of Jupiter and Saturn. In the space race - the only space race - as in space itself, there is no end, only an ever-expanding horizon.

President Kennedy never said reaching the moon was America's only goal - he urged us to pursue "the other things" as well.