In mid-November, my Facebook newsfeed and Pinterest threads were already full of ideas for the Elf on the Shelf. Really, people? Take a breath.

I'm finding that there are two feelings about the good old elf: you either love him or hate him. In my case, I've been there, done that, and have a funny story to tell.

I have to admit, I was a little skeptical about it from the start. My son isn't the traditional sort of child by any means. He doesn't like trick-or-treating -- in fact, he gave out the candy this year -- and he wouldn't be caught dead sitting on Santa's lap without some sort of ridiculous bribe from me.

But all the other moms are doing it, I thought, so I should be, too.

We did everything right. My mother-in-law snagged one for a fraction of the normal cost the Christmas before, and we packed it away until we thought he would be ready. Last year he was 3 and in preschool, so he was going to be exposed one way or another. We wracked our brains for a creative name for the little darling. One name after the next was tossed out -- too silly, too boring, not festive enough... blah, blah, blah. You would have thought that we were picking out a name for our next child. But finally, it was decided: His name would be Sprinkles.

Sprinkles made his arrival early one morning in a bowl of Cheerios. Of course I got the idea from Pinterest, and of course I thought it was the best thing ever. My son, however, did not agree. He gave me this look of, "What-in-the-hell-is-that-thing-doing-in-my-cereal-and-why-do-you think-it's-cute?" 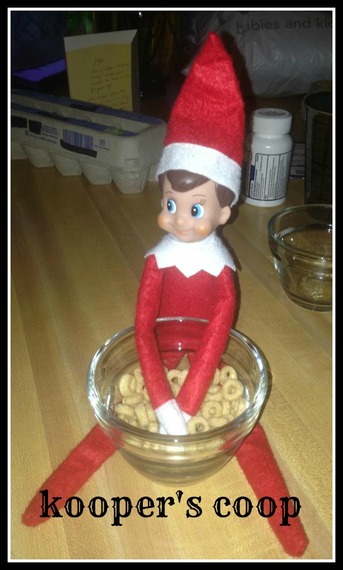 We kept him high up on our bookshelf so that Sprinkles could "keep an eye on" my son and "report back to Santa." My son was appalled by this -- and now that I'm typing it, I am too. When I was a child, it was creepy enough to think that some big jolly man with a beard knew what I was doing, let alone having an actual doll in our house keeping constant vigil. Think about it -- the words to "Santa Claus is Coming to Town" are just a bit bothersome if you really examine them: "He sees you when you're sleeping, he knows when you're awake..." That sounds like the set-up for some bad movie. (Don't get the pitchforks out and start a riot -- I'm still a believer and want my son to be -- just trying to make a point).

In some ways, I think that my son didn't like the idea because he couldn't risk Santa not coming. At one point, he even offered to buy his own toys from his favorite catalogue. Instead of being fun, it was a mind game for him.

The final straw (we thought) was when we went on a cruise last year before Christmas. I packed Sprinkles in my suitcase and had a bunch of fun stuff planned. We visited Disney and Sprinkles left my son Mickey Mouse pajamas to wear... and do you know what my son did? He knocked Sprinkles off of our dresser and trampled on him. We didn't know whether to laugh hysterically or turn him over to a therapist. We decided to laugh it off and pack the elf away for the rest of the trip, saying that Sprinkles was in the ship's hospital. I was off the hook for ideas for a few days, and my son wasn't being "stalked." Life was good.

Then, day after day, I would see parent after parent proudly displaying their elves on Facebook and I would feel guilty. Perhaps it was time for Sprinkles to come home from the hospital. His hat had fallen off from my son's attack on him, so we wrapped his head. While we were wrapping, we decided to bandage him up, make a sling, the whole nine yards. Thinking that somehow, some way, that would make our son change his mind and feel some sort of remorse for his actions. Yeah, let's just say that backfired. His eyes were as big as saucers when he found Sprinkles, and his expression was one of "you have GOT to be kidding me." 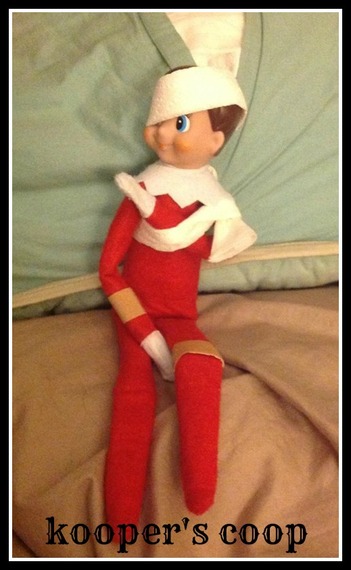 This was the point when we gave up on Sprinkles. My parents understood. After all, they were with us on the cruise and saw what happened to him. My dad even jokingly said that "snitches get stitches." But we felt some sort of pressure from the rest of the family to keep it going. When we packed our house up for a renovation, I thought about keeping Sprinkles close by for the holiday season. Then I laughed to myself and packed him up. Sprinkles didn't give us the same memories that everyone else will probably have, but we still got one heck of a laugh out of it all.

A piece of me was sad -- I knew that as soon as I started seeing all the ideas flood my newsfeed this year, I would want to jump on the bandwagon. Why do I feel like a bad mom for not pushing the idea and making my child be like everyone else's, so that I can be like the other moms? The truth is, my son isn't like other kids, and at the end of the day, I don't want him to be. So rock on, buddy; at least you won't live your life feeling like somebody's watching you, and I won't be scouring the Internet for new ideas.

Paralegal turned stay at home mom, she married her high school sweetheart and writes about their adventures on his family's farm.