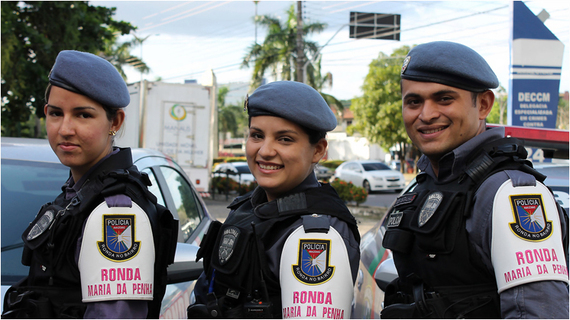 Women are often paid far less than men, while they also perform most of the world's unpaid care work. (Photo © Mariana Ceratti/World Bank)

Women are emerging as a major force for change. Countries that have invested in girls' education and removed legal barriers that prevent women from achieving their potential are now seeing the benefits.

Let's take Latin America. More than 70 million women have joined the labor force in recent years. Two thirds of the increase in women's labor force participation in the last two decades can be attributed to more education and the fact that women marry later and have fewer children. As a result, between 2000 and 2010, women's earnings contributed to about 30 percent of the reduction in extreme poverty in the region.

In fact, for countries to leave poverty behind, both men and women need to get to equal and push the frontiers of equal opportunities even further. But to get there, we need to tackle three issues.

First, violence against women needs to end. More than 700 million women worldwide are estimated to have been subject to violence at the hands of a husband or partner. Domestic violence comes with great costs to individuals but also has significant impacts on families, communities, and economies. Its negative impact on productivity costs Chile up to 2 percent of its GDP, and Brazil 1.2 percent.

Many girls and women have little control over their sexual and reproductive health: If current trends persist, more than 142 million girls will be married off over the next decade while they are still children themselves.

Sometimes protecting women from violence demands innovation. In Rio de Janeiro the World Bank is working with the government to upgrade the urban transport system and make it safer for women through improved lighting, women's restrooms in all metro stations, and services such as women's police stations, women's clinics, and family courts in some of the major terminals. A similar initiative is underway in Ecuador. In Africa's Great Lakes region, we provide grants so that survivors of sexual violence get proper health care.

Second, women and girls still don't have the same opportunities and struggle to make decisions about their own lives. From the female farmer in Eastern Congo who is too afraid of marauding militias to work her fields to the working woman in Rio who isn't on equal footing for higher-paid jobs, significant gaps remain. Women are often paid far less than men, while they also perform most of the world's unpaid care work. Globally, they not only earn less but own less and are far less likely to have access to financial services and other resources that would boost productivity. If women had equal access to fertilizer and modern farm machinery, developing countries would produce between 2.5-percent and 4-percent more food. Across the developing world, more than one third of young women are unemployed, and many are discouraged from starting their own businesses or cannot get the credit to do so. It makes a critical difference that in Colombia, for example, more than 1,300 women from regions with high levels of violence are receiving training and support to start small companies.

Finally, leadership and role models can make a difference. I remember my first meeting with my management team when I became Indonesia's Minister of Finance. I was the youngest person and the first woman ever to hold that job. Everybody else in the room was male. I knew then that I had to work harder than any man to prove to them that I was capable. I am sure many women who have pushed through the glass ceiling have had similar experiences.

We can do better. And we must, because when women succeed, they bring diversity into policy making and inclusiveness into policy. When mothers are educated, they have fewer and healthier children. Studies from around the world -- from Bangladesh and Brazil to China and the United Kingdom -- show that when women earn money and have more control over household spending, they spend in ways that benefit children. They are powerful drivers of growth and formidable fighters of poverty. In other words, they are a force no country, no society, no company, and no family can afford not to unleash fully.