After 282 years of eligibility, a play with a questionable past is being inducted into English literature's most esteemed hall of fame, the Shakespeare canon. Whether it belongs there is, for most people, beside the point. What matters is that the immortal Bard is still tantalizing us with new work, whether he actually wrote it or not.

This month, England's authoritative Arden Shakespeare series is publishing Double Falsehood in the U.S. as a work by Shakespeare -- in part, at least. Editor Brean Hammond of the University of Nottingham concedes a collaborator likely wrote many if not most of the lines.

"Shakespeare's hand can be seen in Act One, Act Two and a little bit of Act Three," Hammond told the London Times. Double Falsehood is hardly a new discovery. For centuries, critics have dismissed it as an aptly titled forgery. A minor playwright named Lewis Theobald first published the text in 1728, claiming he'd rewritten it from a set of Restoration play scripts that he'd acquired. The scripts, in turn, were supposedly reworkings of a lost Shakespearean play of 1613.

So, if the new play isn't an outright forgery, it's at best a rewrite of a rewrite of a collaboration. Even so, news of an addition to the playwright's oeuvre has made headlines around the world. 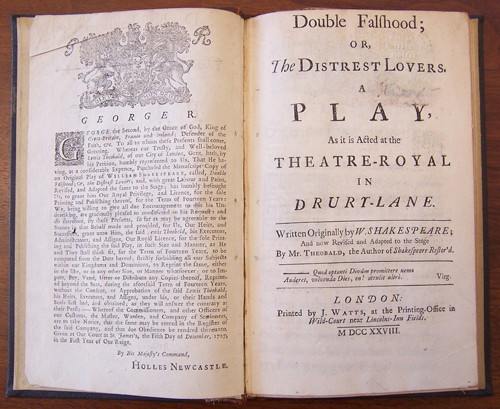 The trouble is, we can never be sure what Shakespeare really wrote. A key reason: no one has ever seen so much as a complete sentence in his handwriting. All we have are a few signatures on legal documents. The curious absence of any works in the Bard's hand helps explain why many people think someone else -- the 17th Earl of Oxford? how about Queen Elizabeth? -- wrote the three dozen plays and 154 sonnets.

Several newspapers in the U.K. chose to dress up their stories of Double Falsehood's canonization this spring with a handsome painting known as the Cobbe Portrait. This picture, noted The Guardian, is "believed to be the only authentic image of William Shakespeare made during his lifetime." Believed by whom? Well, by its owner, certainly. But evidence that the painting depicts Will of Stratford is slim to nonexistent.

The Cobbe does, however, look uncannily like the Folger Shakespeare's Library 400-year-old Janssen Portrait. In 1988, unfortunately, the Janssen's familiar bald head was discovered to be a paint-over, possibly applied during the Shakespeare craze of the late 1700s. Under the paint was someone else's full head of hair.

Shakespeare's plays have touched millions of our lives. We imagine ourselves as Lear or Othello, Juliet or Ophelia. Yet the Renaissance Englishman who created these vivid characters remains stubbornly out of reach. Small wonder that forgers have sometimes tried to ease our frustration.

The most audacious of these was an unremarkable apprentice in Georgian London named William-Henry Ireland. In 1795, the 19-year-old clerk pretended he'd discovered an unknown play in Shakespeare's handwriting while rummaging in an old trunk. The lad had actually written it himself. The play's London premiere was thronged; thousands were turned away. People were ecstatic that the Bard seemed to have reappeared nearly 200 years after his death.

We still take comfort in regarding Shakespeare's afterlife as a drama without end. Archeologists sift the ground he walked in Stratford-upon-Avon. Scholars feed anonymous Elizabethan sonnets into computers, looking for telltale signs of Bardic word use. In the face of perennial disappointment, the news that a new Shakespearean play has surfaced is good news indeed.

But is Double Falsehood a good play? Who cares? It used to be a forgery. Now it's a play by William Shakespeare.

Author, <a href="http://fakeshakespeare.com/" rel="nofollow">The Boy Who Would Be Shakespeare: A Tale of Forgery and Folly</a>