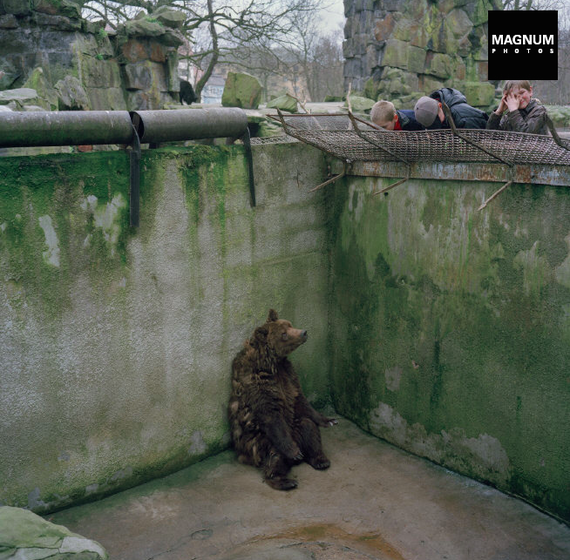 This image has haunted me for over a week now, since I first saw it in my Facebook newsfeed. I simply cannot get it out of my mind, and that's arguably a good thing. Normally I scroll quickly past such disturbing photos. There seem to be more than enough of them on social media, documenting animal abuse in every imaginable form in every country on Earth. You could place them side-by-side along a 24,000-mile invisible thread that encircles the globe at the equator.

The same could be said of the abuse of human beings, and it's surely true, and is no less abhorrent. And yet, the animals. I think that what destroys me when I look at this image is the depth of despair of the bear who cannot understand his circumstances and will never escape them, and remembering that I saw bears just like this one during my childhood. Memories too painful to become entirely sharp all these years later are a buried ache stimulated by this photo. How many of us have similar memories, ones we would never wish upon our children?

Last month I was visiting my parents in Atlanta. On a prior trip down there, we had gone to the Georgia Aquarium, touted as one of the state's top tourist attractions, and it was easy to see why. As I do at all aquariums when I find myself in one, I refused to watch the dolphin or beluga shows, and would not look at them casually for the sunk cost of admission either, as they swam in their tiny habitats. Marine mammals do not belong in prisons or circuses, and no amount of televised orca PR from Sea World, or reassurances from roaming on-site aquarists, will convince me of any justification for the sacrifice of the freedom of these beautiful mammals made on behalf of human entertainment and corporate profit. The facts are in on this one. I always explained that to my daughter when she was growing up.

Despite not having patronized the beluga exhibit during my visit to the Georgia Aquarium, I did follow the recent news of a healthy calf born to one of the female belugas there, a very rare occurrence in captivity. The baby was adorable beyond words, and seemed robust at first. But once human interest in her died down and she dropped out of the news cycle, she herself began to weaken and eventually perished in the arms of one of the aquarium's vets, her devastated mother by her side. It happens a lot to belugas born in seaquariums. It's just sort of a thing.

Sitting at breakfast in my parents' kitchen in Atlanta, my mother shared the news offhandedly, not meaning to cause upset, not really thinking much about it one way or another, just reporting that it had happened in the same neutral way one mentions there has been a pileup on the expressway.

I choked. My toast simply would not go down my throat and I held back tears, gasping from a blocked airway and out of shock, swallowing more coffee to push the bread down my throat. What? What?! It was just too much.

And my poor mom, stuttering that she had not meant to hurt me by being the bearer of bad news, and probably stunned by the strength of my emotions over...over...over what? An animal that died. They die. Animals. They die all the time. Can we really let ourselves become wrung out over every sad thing that happens to one creature or another? We can't. That's true. I wish I could pick and choose, but for some reason I'm not built that way, and I can never anticipate when I will react with such intensity in a world that is full to the mountain tops and down to the sea floors with life and death and joy and suffering. I think most people have stronger emotional walls standing between themselves and the heartbreaking events that are part and parcel of life.

Let's talk now about the three children lying on the viewing platform suspended over the pit containing the abused bear. They are children, the bear is a bear, it is all very interesting to their young minds and they are not to be held responsible for unwittingly partaking of the bear's misery. I can't presume to know how they feel as they gaze at him, or how they will one day feel when they think back on this as adults.

The Greek philosopher Bion said, "Boys throw stones at frogs in fun, but the frogs do not die in fun, but in earnest." I make no gendered assumptions here because the children in the photo appear to be boys, or because Bion was musing about boys. I think what Bion was getting at is that young children often developmentally lack the capacity to empathize with the feelings of other living beings, especially when they are not human. Bion's quote has stuck with me since I first encountered it in grad school. That quote helped me understand many instances of children's cruelty to animals I'd observed as a child myself and not known how to process.

I went to great lengths in verbalizing to my daughter why we did not patronize circuses or zoos, as well as the reasonable counter-arguments that many people give for supporting them (education, conservation and the like). Sharing a balanced perspective with children is important, when one exists. However, it was crucial to me to lay out a clear, values-driven position for our family. Parenting children with a high level of intentionality on whatever issues we believe are underpinnings to a moral life is, in my opinion, one of the greatest responsibilities and also one of the greatest rewards of stewardship of the next generation. Regardless, I was helpless when it came to hiding my bleeding heart, and it bled often.

I keep looking at that bear. I write a few sentences, and then my gaze is drawn back to him. Or her.

My daughter is grown now. My work in this aspect of parenting is done. I don't know what kind of heart you have, you who are reading this now. If I've caused you pain, I am sorry and I am glad. It is what I believe we must give to our children in carefully measured doses. The future of our world depends on it. Empathy must be cultivated and has to begin somewhere, and why not with this bear, or any other figurative or literal bears (or belugas) our children see? Name it. Talk about it. Give voice to the voiceless, that they might be heard by your children's young, impressionable and infinitely powerful ears.

Lori Day is an educational psychologist, consultant and parenting coach with Lori Day Consulting in Newburyport, MA. She is the author of Her Next Chapter: How Mother-Daughter Book Clubs Can Help Girls Navigate Malicious Media, Risky Relationships, Girl Gossip and So Much More, and speaks on the topic of raising confident girls in a disempowering marketing and media culture. You can connect with Lori on Facebook, Twitter, or Pinterest.