This week, appearing in a Town Hall-styled press event, Bristol Palin debuted as a teen "ambassador" for the Candies Foundation, the philanthropic arm of the Candies shoe brand that raises awareness of the teen pregnancy crisis. It was an unsteady first step, which pleased those cynical about former vice presidential candidate Sarah Palin's politically expedient version of her daughter's pregnancy: Remember? Bristol and boyfriend Levi are in love and will marry soon after the election. Bristol and Levi are now broken up and seem to be doing much of their communicating, even seem to subtly be negotiating custody/visitation arrangements for their son Tripp, on prime time TV. Now that no one any longer has to pretend that the pre-election fictions are true, there is a valuable lesson to learn. And, oddly, the quiet girl thrust into the public spotlight as a result of a most private mishap might just help teach it. That is if Levi is invited along.

On the morning of the Town Hall appearance, Bristol also appeared on ABC and NBC, broadcasting maddeningly mixed messages about teen pregnancy prevention on the nation's most widely watched news shows. She seemed to emphasize the abstinence-only approach to pregnancy prevention on Good Morning America ("It's important for me to get involved just to advocate and promote abstinence and send my message out...abstinence is a hard choice but it's the safest choice and the best choice") only to appear on the Today Show minutes later to admit that abstinence can be unrealistic for some teens and they should use contraception ("If you're going to have sex I think you should have safe sex.")

I recognize I'm trained to listen for nuances in the sex ed debate. I'm also twice Bristol's age. And so it's easy for me to slip into the Simon Cowell role. No, she's not polished. Hers is a kind of witness-cross-examined-style speech -- short statements which leave you wondering what she isn't saying. I'm not even sure Bristol realizes that she's been contradicting herself.

So at first listen, her message sounds way off-key. On a second closer listen though, I started to hear something else. It sounded more like a new, albeit unrehearsed and out-of-the-studio, style. In truth, if her televised appearances this week are cobbled together, there is definitely a message worth listening to. Even comprehensive sex ed proponents should be fine with what she's actually saying. People who favor comprehensive sex ed have reflexively shunned her. She has seemed at times brainwashed by the group which still believes abstinence is the only direction a teenager needs to get. But in her roundabout way, Bristol is in fact voicing the core message of comprehensive sex ed which is: there's no better protection against pregnancy and disease than abstinence, teens should postpone becoming sexually active, but those that are having sex need to use to protection.

But prevention is not Bristol's area of expertise (for sure). Bristol is much more interested in warning teens about premature parenthood than putting herself forth as an expert on teen pregnancy prevention. That, I think, is part of the reason why she sounds confused when discussing what teens should or should not be doing. Being a teen mom is her new expertise. This is where she becomes clear: she wants to use her experience to help other teens avoid the same fate. She explains, "If I can prevent even one girl from getting pregnant, I will feel a sense of accomplishment." It's on this point where Bristol and the Candies Foundation (which supports both abstinence and safe sex approaches) have a truly shared perspective, one that gets overlooked by the traditional teen pregnancy prevention messengers. Bristol's and Candies' shared message to teens is: you don't want to become a teen parent.

The traditional pregnancy prevention messages have often missed this. They have assumed teens don't need convincing on that issue. They assumed teens just need to know how not to get pregnant. But statistics provided by the National Campaign to Prevent Teen and Unplanned Pregnancy indicate that about one in five pregnant teens was trying to conceive. For this demographic, messages about abstinence and/or contraception are useless.

And so Bristol may be reaching an emerging demographic. Candies may have found a powerful messenger in her. And let's give her credit, hers is possibly the most difficult of messages to impart. She loves her baby, Tripp is a blessing in her life, though if she could have done it over she would definitely have waited to become a parent -- it would have been better for her and her son. There are difficult emotional acrobatics here, seeming contradictions that, to her credit, she manages to present in a way that feels honest and understandable.

But there is one thing very important missing from the Candies campaign. Lucky for them, the opportunity to fix that is standing right before their eyes. What their campaign needs is Levi Johnston. And Levi has something to say. Few have noticed that Levi has been trying to get in on this important conversation. It may seem like he is just trying to spoil Bristol's day now that he is persona non grata in the Palin household. Whenever Bristol is backed into pushing abstinence, Levi pops up with a wry smile and a disclaimer: "It's unrealistic." Levi has been taking to the airwaves himself. In fact, on the morning of the Town Hall he got himself on the Early Show, in an unofficial capacity, to discuss their unplanned pregnancy. He quite diplomatically praised Bristol for encouraging teens to abstain but, based on his first-hand experience, he encouraged consistent condom use.

What this national conversation desperately needs is for teen boys, like Levi, to be involved. How can we expect them to take responsible steps to prevent teen pregnancy if we act as if they play no part? Levi brings with him a great chance to make boys the stakeholders they inevitably are. He also offers a unique perspective on the difficulties of being a teen father, one that will resonate with boys in a way Bristol's point of view will not. It's also worth noting that Levi is as sought-out by the media as Bristol. He has the same humble, and winning, way of delivering a simple message. He can balance out Bristol's warnings about Saturday nights changing diapers with a pragmatic strategy for avoiding that fate. And, let's not forget, he needs a job. He's also handsome enough (New York Magazine calls Levi, a hockey player, "sex on skates") to get girls to pay attention to his pro-protection message.

These two are never gonna be slick, media trained, celebri-teens with talking points and agents (Bristol's entourage in New York was her aunt, baby and Dad.) No doubt, Candies is taking a risk with Bristol and would extend that risk even further by giving Levi an equal voice in the discussion. But with great risk comes the possibility for great gains too. The United States is suffering from a teen pregnancy scourge -- we have the highest teen birth rate of any other developed country, and by a long shot. Teen parents are less likely to complete the education necessary to qualify for a well-paying job -- in fact, parenthood is the leading cause of school drop out among teen girls. College then becomes the remotest of possibilities. Less than two percent of mothers who have children before age 18 complete college by the age of 30.

Teen parents and their children are not the only ones paying dearly. Premature parenting in the United States costs taxpayers (federal, state, and local) approximately $9.1 billion each year. Most of the costs are associated with services to address the negative consequences detailed above.

Bristol and Levi are bravely offering their intensely personal misstep up for others to learn from. They may be at odds with each other (another statistical likelihood they realized) but they are united in their message about the not-so-glamorous life of teen parents.

For breaking news on threats to birth control access and information visit birthcontrolwatch.org 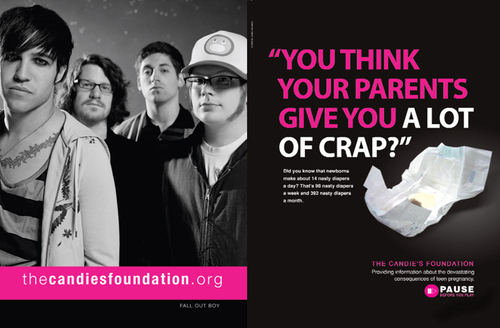