I was lucky to score one of the high top tables in the crowded cafe, and therefore wasn't surprised when I heard a voice say, "Is anyone sitting here? Mind if I do?" I looked up to see a short man standing by the chair. He was probably in his early-50s, barrel-shaped with wide, round eyes to match his wide, round balding head. A ring of white hair fell neatly to his shoulders. I smiled and nodded, "By all means." I had done the desperate, furtive look around in the packed coffee place, hoping that someone would take pity on me and allow me to perch on a piece of their real estate.

He settled himself and I scrolled a bit on my phone. There was middle-aged couple at the table next to me talking about where they wanted to go after finishing up their drinks. The man launched into one of those "Where are you from" kind of conversations which, in places like Chicago feel warm and folksy, but here in Boston make people recoil faster than a slug doused in salt. The out-of-towners indulged him. "We're from New Hampshire," said the woman.

"Oh!" the man's eyebrows shot up. "Who are you voting for then?"

"Yeah, but it's a scene, isn't it?" the man pressed on. "Bernie is crazy, Trump is definitely crazy, and then Hillary is, you know..." he trailed off. I bit my lip. The woman chuckled. "I haven't decided yet, so we'll see." The woman diffused the conversation and the chatter turned toward the more generic "be sure to check out" this landmark or that museum while you're in town kind of exchange.

I had just been to one of the nearby bookstores where I had bought Gloria Steinem's recent memoir My Life On the Road and was looking forward to pausing over some coffee to dig in and read for a while. Now I felt supremely self-conscious about breaking it out in front of this person. Would he try to engage me in a debate on feminism? Would he take it as an invitation to assume I was a Hillary supporter and pontificate on the laundry list of reasons why Hillary was bad for the country and even worse for women? Would he get angry? 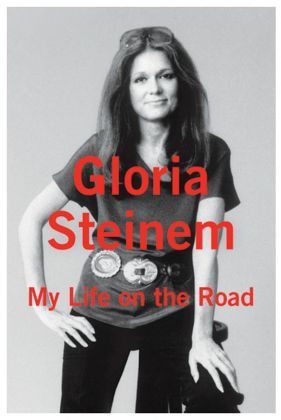 In the zillion years I spent as an undergrad and graduate student studying literature, a book has never made me nervous. But here I was weirdly worried. I felt very much what it means to be an educated white woman during a time in our country's history where the focus on women -- on our bodies, our access to health care, our politics and our relationship with feminism -- is like a powder keg rigged up to a hair trigger. Women are in a perpetual state of vigilance it seems, on guard against physical and verbal assault, crouched in a defensive pose in anticipation of backlash. No wonder women are confused and cagey about feminism. It's risky and messy. It's a lot of work. Isn't there an app for this?

I'm afraid to dig the book out of my bag and plunk it on the table, but I'm also afraid not to. Because what kind of feminist does that make me if I'm not willing to meet discussion of my politics and beliefs head on? Pathetic.

Several months ago I was at a holiday gathering, seated next to a woman in her mid-70s. The aunt of one of the guests, this woman felt free to express her opinions liberally about everything from how technology is stealing childhoods to how little doctors truly care about their patients. If she ever had a filter, it was stripped away now. She launched into a conversation about women, marriage, and nearly snarled, "I blame that Steinem woman for a lot of how women are today. Unhappy. Thinking they could have more than they really could." I grimaced, caught between a good-girl desire to "respect your elders" and an itch to set this woman straight on the positive gains of the women's movement.

"It's complicated," I said, choosing, instead, to play Switzerland.

Because the truth is, feminism is complicated and imperfect and evolving. The truth is that our culture is addicted to sound-bite intellectualism and fear-based politics so that leveled, rational, thoughtful discourse is both rare and arduous. The truth is that's why Steinem's work and legacy are vital. That's why we can't afford to do feminism-lite, to choose to be "out" about these beliefs when it's convenient, to shrink back from these opportunities to respectfully engage with other people, no matter how hard, no matter how scary, no matter how tiring.

I put my phone away and took the book out, propping it on the table in front of me. The man looked up from his phone. His eyebrows shot up for the second time that morning.

I cracked the spine and smiled.