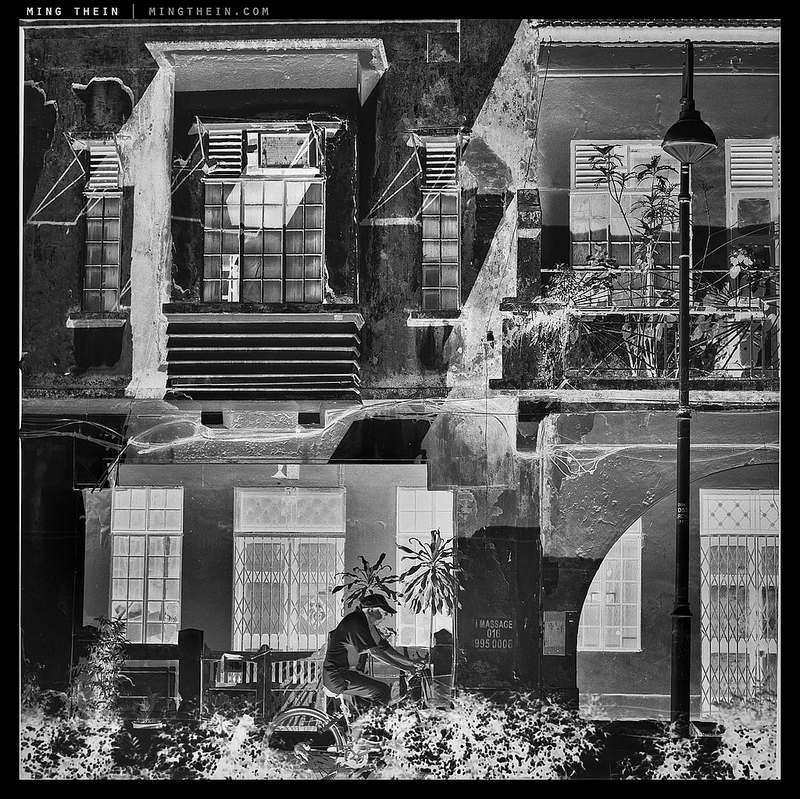 One of my reasons to photograph: because I see beauty of form in the mundane I want to share. I'm sure the man on the bicycle has passed by this building enough times that he didn't pay it a second moment's notice, though. Photo by Ming Thein (Hasselblad 501C, 120/4 CF T* on Delta 100)

This post is a continuation of the previous essay on the image making process. It's a question I've often asked myself; rationale being that if I could understand the triggers that drove me to take an image in the first place -- or perhaps not so much what drew my eyes to the scene, but held them there -- I'd be able to make a more conscious effort at being aware of these things, and thus make even stronger images.

Firstly, let me say that personally, photography is almost a compulsive addiction. It something that I always feel I need to do; I get anxious if there's any possibility of an interesting moment or scene going observed but unrecorded. I'm constantly looking out the window if the light's nice -- something I've got to be careful of doing too often, because non-photographers will think you're just being rude. As a result, there's almost always one or more cameras on my person, usually only separable by surgery. The funny thing is, even though I'll see a huge variety of scenes, I don't feel compelled to have a camera that can capture all of them; I'll get jittery if I have no camera, but I'll be perfectly happy with just 28mm -- even though I'm seeing things at 200mm or beyond.

This leads me to wonder if it's the image itself, or the production of the image that is what keeps me going: it could really be either, or both. Hell, I enjoy a good camera as much as the next guy -- there's no reason not to -- but it isn't the endgame, either. A good photograph is satisfying irrespective of the tool used to make it; but yes, I admit there's more pleasure in getting it out of something that's enjoyable to use -- that way you enjoy both the image and the process. Undoubtedly there are people who photograph simply because they like cameras -- and there's nothing wrong with that whatsoever.

Obviously, it's impossible to capture every single observable detail in every single moment all the time; in any case, there'd be far too much sheer information for you to process. Editing is always necessary to cull the mundane; but what defines the mundane? Why is it that some people can find plenty of interesting compositions in a location where others struggle to see even one? I think there are two reasons: firstly, the 'threshold of normalcy' varies from person to person; secondly, everybody has different triggers. To understand the triggers -- in effect, the reasons why -- we must once again look at human psychology*.

*So much of art is dependent on the interpretation of both the creator and the viewer -- it's a shame that people in the pursuit of either don't spend more time trying to understand either.

The threshold of normalcy is defined by social, geographic and cultural norms. It's the main reason why tourists are stereotyped as taking photographs of everything; the real reason why is because nothing looks familiar to them because it's outside their comfort zone. (Whether any of these images have artistic merit or not is a separate matter.) Serious photographers do the same thing, but the threshold is lower; very serious photographers have a threshold that's almost zero: anything is fair game, and with the right light or composition, can make a compelling subject. It's the last bit that I personally aspire to: the ability to see something in any situation. Perhaps that's why I'm always trying to photograph, or trying to see a viewpoint worth capturing and sharing.

When something exceeds the threshold, then it generally gets the viewer to sit up and pay attention. This is frequently accompanied by a desire to photograph or capture it to share with other people from a similar social/ cultural background; "look at this, it's different!" is usually the message. The difference is created by the subject, or the scene, not by the photograph -- or more specifically, it's not the photographer that's making the photograph compelling. They are merely serving the function of recorder, or 'sharer' -- for want of a better description. A photographer with a bit more experience and skill may then push things a bit further by creating an image that is compelling of itself; using composition and light as a tool to create more of a difference to the norm. 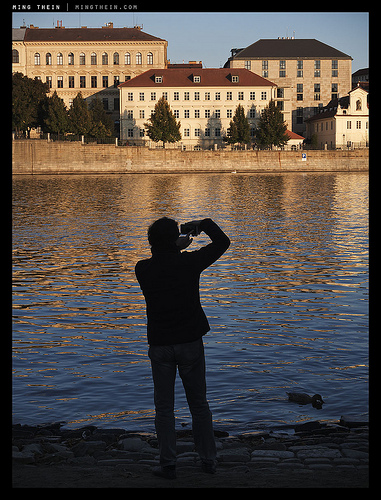 But I'm getting ahead of myself here: there are situations in which people feel compelled to record and share (with ever-increasing emphasis on the latter in today's social media age, frequently for bragging rights, it seems.):

*I'm not kidding. It really exists in downtown Kuala Lumpur. But here's the thing: would you believe me if I didn't have a photograph to prove it?

The strongest of all the reasons is the last. It encompasses the entire list and goes further: there's a desire to see and share something from a different point of view, with no ulterior motive. You're not trying to show people how much money you have, or which stars you partied with -- you just found something visually compelling, and want to capture and share it. I actually think despite initial appearances, this is perhaps the most selfless of all reasons to photograph; even though it requires a very selfish, personal reason to go out and do it, the end result is pure in its pursuit of art.

Of course, the ultimate is to be able to create so much of a different point of view that the subject doesn't matter; what draws and holds the attention of the viewer is fully attributable to the skill of the photographer. Whether the scene is entirely a product of the photographer -- say, studio still life setup -- or something 'found,' the ability to create can be both liberating and crippling. Liberating, because you know that you have the ability to shoot wherever and whenever suits your pleasure; crippling because you feel that compulsion to always be 'on call' -- it almost feels like a duty or responsibility, in some ways. We have to document life and what we see in the world -- partially because we can, and partially because there's so much out there which we see, but perhaps the majority of others miss or allow to pass them by. Just think of all the visually interesting things people with their eyes closed -- or perhaps resolutely focused on something else -- are missing out on!

At the end of the day, I photograph because I want to. No more, no less; and when I don't want to, I need to know when to stop: if I don't, then the output will suffer, and I won't be happy with it -- nor will my audience. There are days where the camera seemingly never leaves your eye, and there are periods -- sometimes a week or two - during which I hardly shoot anything at all, partially due to lack of inspiration, partially due to being busy with other things. I do feel a bit of something - perhaps guilt, perhaps compulsion -- that I should be getting out there and keeping the skills honed, but past experience has proven that these forced outings tend to be both hugely unproductive and extremely frustrating. If anything, they deepen the feeling of being unproductive. And on that note, I'm going to burn a roll or two because the light's nice and I feel like it -- creative feast and famine is a topic that I'm planning to save for a future essay.