Not long after noticing friends and coworkers using "slash" in everyday conversation, I started seeing it cropping up everywhere, all the time.

Either spelled out in five characters ("slash") or just one ("/"), I saw it used to tack on subsequent ideas that could have been expressed in other, perfectly conventional ways. But they weren't.

It was invading texts, instant messages, email and even in-person dialogue. The slash was being vocalized where it might otherwise appear in written form, integrated smoothly into audible discussion. Since we aren't yet giving other punctuation the same treatment ("Hello exclamation point" still sounds odd), it didn't make much sense.

After so much time being delegated to such boring utilitarian functions as dates ("8/30/2014") and fractions ("3/4 cup"), the humble slash mark seems to be getting a linguistic makeover. Anne Curzan, professor of English at the University of Michigan, described the practice among students in her classroom last year. Since then, Curzan told me in an email, she's been studying examples of slash usage on Twitter. The most common use corresponds most closely to "and/or," but she said a fair number are "used to connect one idea to another, perhaps meaning something like 'following up' or as something like a spoken semi-colon." Still, other examples use the slash as a way to indicate "truth values for the elements it connects," Curzan explained. In other words, saying one thing when what you really mean is the next. Like saying you need to rest when what you're really planning is binge-watching TV.

Grammatically speaking, outside of its role as punctuation, the slash also functions as a "coordinator." Coordinators, also called coordinating conjunctions, include "and," "but," "or" and other words that function to link independent and dependent clauses.

English speakers are pretty comfortable with this idea, as Geoffrey K. Pullum, professor of linguistics at the University of Edinburgh, explained on his blog back in 2010. For example, we might invite our friend/roommate to go see "Boyhood" while planning to stuff our purse/backpack/pockets with cheap candy. Our meaning is clear. The person with whom we share a responsibility for rent is also our friend, and whatever discreet container we bring to the theater will help us avoid paying five dollars for a box of Sour Patch Kids. The slash helps us present alternative descriptions. Pullum suggested, however, that it really only makes sense in "lexical rather than phrasal categories."

"With clauses," he wrote, "I think there is no possibility of using it at all: consider 'I think I'm having hallucinations slash someone is playing tricks on me.' Doesn't seem like English at all, does it?" These days, many English speakers would disagree. Curzan explicitly noted that the slash can now be used to connect full clauses.

"The most interesting implication to me," she said, "is that this coordinator is expanding in use ... and taking on new meanings."

Usage guidelines are, of course, still very restrictive in formal writing. When the style guides and writers' handbooks I consulted mentioned the slash at all, they called it "rarely necessary." A 1977 edition of Theodore Bernstein's "The Careful Writer" referred to the simple "and/or" as "a visual and mental monstrosity that should be avoided."

Tell that to anyone who considers themselves a "slash DJ," to indicate their interest in the turntable arts outside of a regular nine-to-five. (Writer-slash-DJ. Financial-consultant-slash-DJ. Animal-whisperer-slash-DJ.) Or to Jezebel editor Kara Brown, who described Robin Thicke's "Paula" as the singer's "most recent album slash lame ass attempt at gaining publicity saving his marriage."

While it'd be difficult to pin down exactly why we started going slash-crazy, it sure seems to correspond nicely with our culture of digital communication. Abbreviated by a lack of time or screen space or both, our technology has allowed instant messaging to flourish, so we might make our always-important thoughts known as quickly as possible.

The slash works as a stand-in, whether written or spoken, helping the writer express multiple ideas without going through the trouble of stringing them together using appropriate grammar, or else risking a series of awkwardly short bullet-point sentences. However strange "I'm going for a run slash walk in the park" sounds to your ear, it gets across the same basic message as the much wordier alternative, "I'm going to run in the park but probably do a fair amount of walking, too, because running is hard." Using "slash" assigned more "truth value" to "walk" over "run." The slash gives us a perfect opportunity to say two or more things at once like this, especially if one or more of those things is our own unsolicited snarky commentary. ("Friendship slash rivalry." "Review slash indictment.")

In digital scenarios where time is of the essence, it might seem counterintuitive that typing "slash" in the written form would so often take the place of the shorter and equally comprehensible "and" or "or" if convenience is such a concern. So maybe it speaks, then, to our comfort with digital communication tools like keyboards and touch screens. Typing is second nature to us, and the slash is an almost mindlessly simple way to link our related thoughts. It's a match made in, um, some factory in China.

But will it stick around?

We can't say. To certain linguists, though, change is actually a great sign. Change means that people are using a language, and using a language keeps it healthy. (There's not a lot of new slang being formed, for example, in Latin.) But everyone owns the English language -- or, maybe, no one does -- and we're not that great at sharing. If it is, in fact, here to stay, some grammar-sticklers will undoubtedly be scandalized at the prospect of a new coordinator, which Curzan called "a category of words that doesn't often show much creativity and/or admit new members."

Correction: This story has been amended to reflect the correct spelling of Geoffrey K. Pullum's last name. 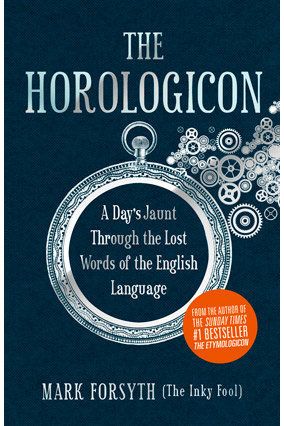 1 / 8
A sampling of our favorite words from Mark Forsyth's<em> The Horologicon.</em>