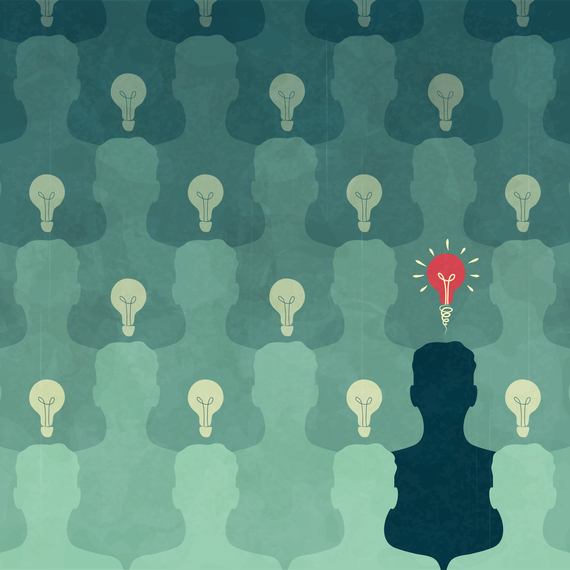 Humans evolved in social hierarchies, and as a result we have significant cognitive resources devoted to identifying and then empowering potential leaders. However, incompetent or even malevolent individuals can take advantage of the cues we use to identify potential leaders, and rise to power even when they may be poor leaders, or even worse.

Charisma is a part of the problem. While charisma eludes a precise definition, the management professor John Antonakis and colleagues have delineated nine teachable tactics, including nonverbal behaviors, such as use of an animated voice, gestures and facial expressions. Then there are verbal tactics, such as the communication of moral conviction, of having high expectations, and of high confidence. Visionary leaders can attract and motivate followers, but they can also lead group off a cliff.

As well as charismatic individuals, we're also drawn to narcissists, people who vigorously fight to maintain a positive self-image even at the expense of others, including people who often lash out at detractors. Amy Brunell and colleagues found that in work groups, narcissists with a strong will to power were ceded the largest leadership roles, but with no benefit to group performance.

Although narcissists can be energetic and charming, they also tend to be immoral and destructive leaders. In an analysis of every American president through George W. Bush, Ashley Watts and colleagues found that grandiose narcissism--assertiveness and immodesty--predicted several indicators of successful leadership, such as winning the popular vote and passing new legislation. But it also predicted unethical behavior, dirty politics, impeachment, and losing reelection. In romance, business, and politics, narcissists tend to wear out their welcome. We like to hire them, but then regret our choice soon after.

One holdover from prehistoric times is the appeal of dominant leaders, those who rule by threat and aggression--and might keep misfits in line or defend the group from violent outsiders. Anthony Little and colleagues found that when people were shown two men's faces and asked whom they'd vote for to lead the country in a time of war, they picked the more masculine. In a time of peace, they preferred the more feminine. So an aggressive, dominant leader vying for power might depict a war with an enemy county, or something as vague as economic hardship or terrorism, thus attracting scared followers. Does this sound like anyone you know?

Mark van Vugt and Richard Ronay, who study the evolutionary psychology of leadership, have argued that our preference for male leaders may be a vestige of ancient circumstances, and that in an era that emphasizes communication skills and empathy over raping and pillaging, women might make for better executives.

Fear mongering can also increase existential angst, which can increase support for a leader who embodies a strong defense against the purported threat. A 2004 paper by Mark Landau and colleagues found that subtle reminders of the 9/11 attacks increased support or President George W. Bush and his anti-terrorism policies, among both conservatives and liberals.

An autocratic leader needs only to instill uncertainty to gather support. Several studies show that uncertainty can be treated by the limbic system in the brain as even more threatening and dangerous than actual threats. In a study by David Rast and colleagues, British workers who felt their futures to be uncertain--but not those who didn't--reported appreciation for bosses who were "harsh," "bossy," and "autocratic."

Yet when tyrants gain control, we have more to blame than just the tyrant. Art Padilla and colleagues have written about the "toxic triangle" of destructive leaders, susceptible followers, and conducive environments. Charismatic and egotistical leaders take their greatest hold among followers who lack self-assurance or who share the leader's ambition and selfishness, and in situations marked by instability, individualism, or lack of accountability.

The interactions between leader, follower, and environment create a feedback loop in which toxicity can self-amplify. But it allows a leader who is toxic in one circumstance to be well-suited for another. Recent work by Annebel De Hoogh and colleagues found that among retail teams with stable power dynamics, autocratic leaders increased intolerance and fear of risk-taking, thus reducing team performance. But in teams that suffered power struggles, autocratic leaders actually boosted safety and success.

So it seems there may be times and places for narcissistic, dominant, aggressive leaders--otherwise they would never have any appeal - such as when we have conflicts that may require an aggressive, dominant response. On the other hand, when collaboration is likely to be a better path to a healthy organization, or a healthy planet, we have to be careful not to let charismatic leaders use our psychology against us. Toxic leaders, like overly sweet deserts, might seem delicious in theory, but the results can leave a bad taste in the mouth, and give us indigestion for hours. Or in this case, in the real world for years to come.