The day before Obama visited Hannover to make a renewed push for the Trans-Atlantic Trade and Investment Partnership (TTIP) thousands of people took to the streets of the German city to take part in a pre-emptive protest against the deal. Obama, and some other European leaders, ignored the protest and proceeded to spend the next two days singing the praises of free trade and how this agreement would be beneficial to peoples on both sides of the Atlantic. That was a mistake. Pushing forward risks alienating voters and leaving more communities, particularly in the industrial heartlands, behind. 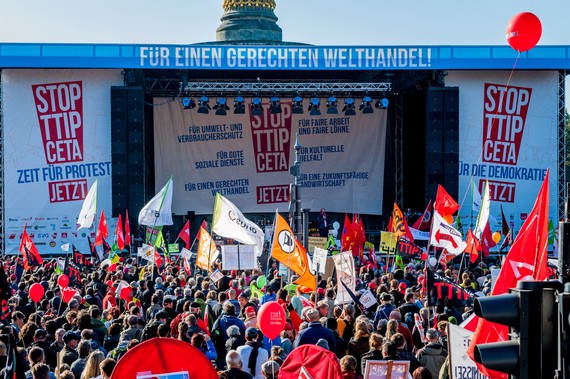 The renewed effort by Obama and his European counterparts to finalize the TTIP before his term in office ends is at odds with the strengthening anti-trade sentiment in Europe and the US. Most of the candidates slated to replace Obama come next January have spoken out against TTIP and for the first time in my living memory an anti-trade message drew multiple standing ovations in the historically pro-trade Republican party. Bernie Sanders' anti-trade message has wrong-footed Hillary Clinton forcing her to decry Obama's other major free trade agreement, the TPP, of which she was one of the chief architects. The TPP is currently awaiting Congress' approval.

Mainstream European parties are also being assailed by an anti-trade, and more broadly anti-establishment, sentiment stemming from frustration at Brussels' slavish fixation with austerity, a never ending Euro crisis and the refugee crisis. These extremist parties draw their support from communities dispossessed by free trade who traditionally voted for social democratic or socialist parties.

With such an anti-trade backdrop it is quite shocking to see European and American politicians forging ahead with the deal anyway. This stubbornness to push forward with TTIP only adds fuel to European extremists who complain of a "democratic deficit" within the EU while fueling voter angst among Americans who feel that Washington is too concerned with doing the bidding of the elite.

That being said, there are many benefits to the deal. Politically, it strengthens the Trans-Atlantic alliance when its other bedrock, NATO, is under fire from leading presidential candidates in the US. Economically, it will create one of the largest free markets in history, and given the proximity in terms of living standards and wages between the US and EU, would likely not create the same sort of job loss that other FTA's like NAFTA have created.

But there are also serious drawbacks. The poison such a deal will introduce into the political discourse stokes the ranks of extremist parties and with dysfunction in Washington and an adherence to austerity in Europe it is unlikely that social programs meant to buttress the effects of free trade will be enacted.

For both those reasons it's prudent for Obama, Merkel and other Europeans to table the TTIP discussion for the time being. Instead of focusing on passing the comprehensive TTIP both blocs can advance important but less grandiose agendas like harmonizing pharmaceutical regulation, lowering tariffs, liberalizing air travel across the Atlantic and making it easier for each side to get work visas to the other.

It's about time politicians started engaging with voters before they look for someone who will... like Donald Trump.

Sign up for Daily Pnut, an email on world affairs that will brighten your mornings and make you sound marginally more intelligent.