Due to the tragic death of beloved actor Robin Williams, this week the world is talking openly about depression and suicide. Sadly, this trend will soon change as the buzz settles down. And to me, that's equally as tragic. I say this because it's astounding the number of people who, like Robin, fall into a deep pit of pain filled with such unbearable agony that it alters their ability to imagine the prospect of a brighter day.

According to the American Foundation for Suicide Prevention (AFSP), suicide claims more than 32,000 lives in the United States and one million lives worldwide. That's beyond heartbreaking.

The truth of the matter is that people who battle clinical depression may very well be funny, kind, cheerful, and sweet; they are also woefully despondent. In fact, those who suffer from depression often exhibit a greater level of empathy because they know what it is to drown in anguish.

My mother was full of amazing qualities. I've never met a more playful individual. Her infectious laugh and joyful smile were so sparkly it was as if she was made of glitter and sunshine. There was nothing she wouldn't do to make her kids and grandkids happy -- including jumping into a lake, fully clothed.

In short, she was fun.

Once clinical depression took hold of her, my once gregarious, vivacious, loquacious mother felt worthless and weak, ashamed and anxious, sad and scared. Just as dementia strips away a person's identity, so, too, does depression.

My dad, brother, and I tried to get her help, but people with depression are scary good at faking their true feelings. They learn to be deceptive and evasive. They learn to straight-up lie. And I think they do this because society has taught them that mental illness isn't to be discussed.

When Mom was in treatment, I encouraged her to snarf up every last resource that was provided to her -- individual therapy, group therapy, medicinal therapy. She looked at me with frightened puppy dog eyes and whispered, "But then everyone will know."

A part of me could understand her trepidation. When I was 12 years old, I endured a month-long hospital stay when anorexia had whittled me down to 78 pounds. During that time, I begged my parents not to tell anyone why I was hospitalized. Just like Mom, I feared people would call me "crazy." At the very least, I suspected they would minimize my condition, as evidenced by the number of times I heard, "You're so thin! Why don't you just eat?"

Mom likely assumed folks would say something equally as stupid to her like, "You're so sad. Why don't you just cheer up?"

Although our family tried to get Mom help, she didn't know how to accept it. Instead, she focused her efforts on convincing the medical professionals that she was improving, and, by god, they believed her. The psychiatrist's exact words to us were, "She doesn't belong here."

Five weeks later, she killed herself.

So, what are family members to do in the aftermath of a suicide? I'll tell you what we want to do. We want to curl into a little ball, shrivel up, and die. Because now we are reeling from an intense pain that we cannot escape, either. So for a period of time, we have no choice but to eat, sleep, and breathe pain. Thankfully, I have found that by going to therapy, exercising, hugging, sharing, and crying, it is possible to return to the land of the living.

I refuse to feel shameful, strange, or mistaken for taking a proactive stance against this insidious disease that robbed me of my precious mother. Therefore, since Mom's death 16 months ago, I've written several articles about these topics. Some people in my life applaud the effort. Others are dumbfounded as to why I would share such a personal and difficult tragedy.

It's pretty simple, actually. I've always been a fairly forthright person. Being a freelance writer, through the years I've written about a number of embarrassing, ridiculous, and heartbreaking situations from my life. Like the time I sped down a dark road in order to make curfew when I was a teenager. And the time I flunked college math. And the time I nearly starved myself to death. By sharing my stories, I remind my readers that we all struggle, we all stumble, we all hit rock bottom in some way, shape, or form, but despite how it may feel, we are not alone.

Suicide grief is lonely... And we feel lonely because often we don't have any one to share the road with us... In this confusing and often lonely journey we call suicide grief, there is one aspect that sustains us and guides us: hope. It is hope that keeps us forging forward. Hope helps us to know deep down somewhere inside of us we will one day feel good again.

My mom was deeply compassionate, and so I believe that she would encourage me to do anything I could to perpetuate healing in both myself and others. This is why I write about depression and suicide. This is why I raise money for AFSP. This is why I participate in AFSP's Out of Darkness Walks. This is why I wear my AFSP shirts out in public. This is why I post on social media about mental illness. This is why I ask people how they're doing... and then take the time to listen for their honest answer. 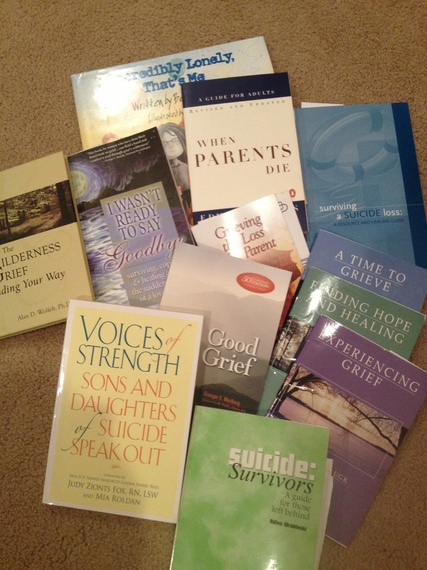 So, let's talk about depression and suicide -- and not just today and tomorrow because it's a trending topic. I understand that not everyone feels comfortable discussing such subjects so candidly, and that's okay. I'm not trying to shove an agenda down anyone's throat, nor am I trying to rip open any wounds folks may have.

I'm just trying to get the conversation started and keep it going. Because doing so may save a life.