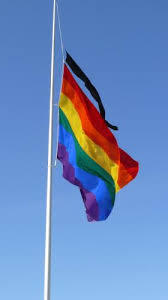 To think I was just starting to feel like we've come so far.

When I came "out," I had it kind of rough like most people my generation who were going through it. I was a single, gay dad back in a time when none of it was discussed, accepted, or supported. There were no role models yet there was plenty of scrutiny. I felt alone most of the time, raising my children, trying to build meaningful relationships, and managing my career.

My only solace were the few gay bars that were fortunately close to my home in Bucks County PA, or the bars I could go to when I was in New York City. At those bars I felt safe from the stares, the rumors, and the comments about "my lifestyle."

Twenty years later, living in Manhattan, it certainly seems like attitudes and behaviors have significantly changed for the better. I see same-sex couples walking down the streets holding hands, I scan social media feeds filled with pictures of gay people out living their lives, and I listen with glee at stories of marriage equality.

My own Facebook page is filled with fellow gay fathers. I don't feel alone anymore.

There are days when it feels like we've come so far that perhaps we don't even need to talk about it anymore. Perhaps there's no need for Gay Pride or Pride Month or Queer Voices on Huffington Post.

Whatever it was or wasn't and whatever caused or didn't cause it, the fact remains that gay people were singled out and targeted. And they were forced off the planet.

These people were out celebrating life with their friends. They were having a footloose Saturday night. They were celebrating Gay Pride during Pride Month, just like me.

They were at a gay bar where they felt safe to be themselves and to be with their friends.

Our gay bars are not so safe anymore. We can't feel safe in our "home" anymore.

As I deal with my own grief and sadness over this horrible tragedy, I realize that we do need Gay Pride Month. And the Puerto Rican Pride Parade. And Black History Month. And every other celebration of what makes each of us unique and makes each of us equally human.

Equally human and equally together.

Here I was thinking that perhaps Pride Month is just nostalgic at this point, when it fact it's never been more important. There's a reason why we celebrate Pride Month, and that is abundantly clear to me now.

Celebrate with Pride, just like all of those folks in Orlando were doing. In fact, let's celebrate a little harder this year.