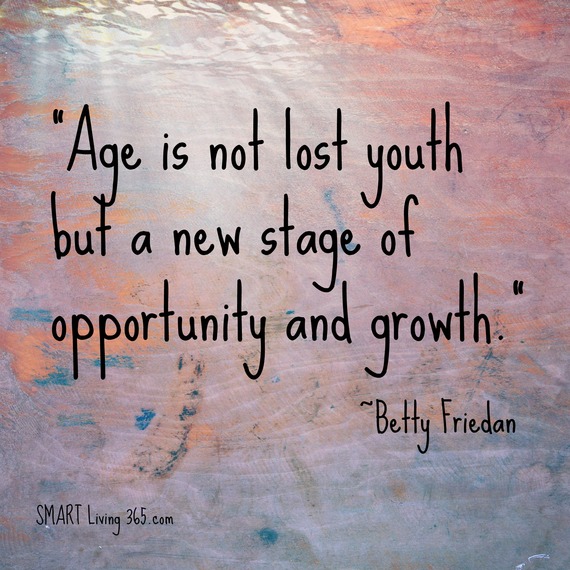 Henry Ford supposedly said, "If you think you can't -- you can't. If you think you can -- you can." While that statement usually applies to reaching our goals or persevering in spite of the odds, we seldom consider it in context with aging. Yet, growing research shows that our view of aging has a sometimes dramatic effect on the quality of our health, happiness, and wellbeing. Not only does what we each think about aging matter, how we feel about aging as a society influences the experience that each of us will have as the years add up. Fortunately, if we can learn to identify those stereotypical prejudices most of us hold about aging, we can halt and maybe even reverse many of the negatives formerly believed to be our destiny.

I'll bet there isn't a person alive in our country that hasn't heard a good joke lately about a senior citizen. Facebook is full of funny photos and captions showing older people as buffoons. Just about every situation comedy on television portrays elders in a negative light. No wonder none of us ever want to grow old! Is it possible we do ourselves a tremendous disservice every time we pass those cartoons around or laugh along with others when another senior is the butt of a joke?

That's what Becca Levy, an associate professor of psychology at the Yale School of Public Health and lead author of a current study on aging, believes. She is convinced that such negative stereotyping is a "public health issue." Ultimately it is possible that such a constant cultural mindset perpetuates an age-based stereotype threat (ABST), along with a prejudice and discrimination that are nearly as insidious as those surrounding racism or gender inequality.

The good news is that during the last 20 years a growing number of studies clearly demonstrate that what we think about and how we feel about aging changes the outcome of our lives. Nine of the most interesting are: (note: links to the actual study available)

The good news is, as Professor Becca Levy says, "What people aren't aware of is that they have the ability to overcome and resist negative stereotypes" and "compensate for the ill effects of automatic ageism." Now that we know about some of the results of current studies, here are six things we can do to reverse some of the trends of negative aging stereotypes and feel better about ourselves as we age:

1. Recognize the many benefits of aging. Continue to educate yourself about the realities of aging -- rather than blindly accepting the cultural bias. Selectively read information that increases your knowledge about the positive aspects of aging, while refusing to read or study those that imply otherwise.

3. Stop watching so much television -- especially comedies. A study done in 2005 shows that the more a person watches television, the more likely they are to have a negative view of aging. Situation comedies are the worst. Also of concern is the invisibility of older adults and seniors on network programming in ways that contributes to the negative stereotyping of an aged population. (Link)

4. Refuse to blame some of your experiences on your age. Multitasking or not paying attention is usually the culprit behind memory problems, but many of us routinely blame it on our age. Stop it! Also, many health issues like lack of flexibility, weight, and even poor health happen more as a response to our day-to-day life choices rather than our age. By recognizing the true cause of some of our experiences, we start realizing that age doesn't have to be as negative as we've sometimes believed.

5. Hang around with people who see aging in a positive way and avoid those who don't. Just like so many things in life, the people around us have a huge influence on our thinking and quality of life. While it might not be easy to break off from those who see aging in a negative way, our health and happiness depends upon it.

6. Make a habit of thinking of the benefits of your advancing age rather than the detriments. While thinking of ourselves as younger than we are might be advantageous at times as we age, it is wise to stay open to the opportunities of continuous growth and possibility. Even when there are certain things we can no longer do like we did when we were young, if we continue to develop new ways to relate to the world and hold a positive perspective on that, the future can be hopeful.

We live in exciting times because the overall view of aging and what it means to all of us as we grow older is more positive than ever. Finding out why some people age in a positive and healthier way compared to others is under study by dozens of organizations on a regular basis. Learning to make the most of every stage of our lives is a good way to live SMART 365. And just like at all ages, staying aware of what we think and feel about others and ourselves is a key to a healthy and happy life.