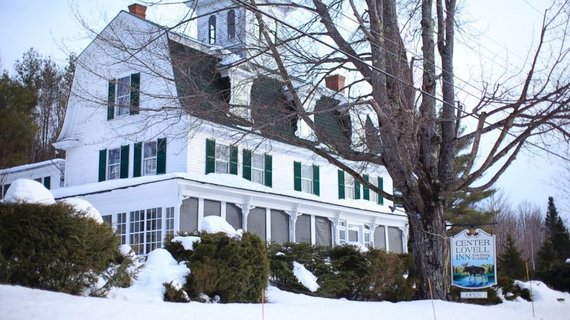 I lost, but it feels like a win. Joining about 7,500 other people, I pursued a dream, and just doing so paid unexpected dividends.

The challenge was an essay-writing contest. You may have heard about a lady named Janice Sage who vowed to award her Maine country inn to the writer of her favorite 200-word essay on the topic of "why I want to own and operate a country inn".

The contest generated a lot of passion, and contestant Jennifer Zingery Newton described what it was like for her the night before the winner was decided. She wrote:

I'm sure I can't be the only one wide awake, on Facebook, my phone by my side, constantly trying to put my tablet down, just to pick it up again a few minutes later just to stare at the inn, again. It feels like I'm a kid on Christmas Eve, when there was magic waiting just the other side of sleep, but I was too excited to close my eyes because I was just too filled with the wonder of it. Rarely was Santa able to bring me that big-ticket item I dreamed of...and I was often devastated. I was just so certain he was going to pull it off. Invariably, though, there would be that one gift waiting for me, that I never would have expected -- because I had forgotten to even ask for it (so how would he even have known?) and it was perfect. Point is, I really don't expect to have the phone ring tomorrow -- then again, it might -- but I will enjoy every minute of this feeling while it lasts, because after tonight I won't be able to. And, when that phone doesn't ring in the morning, and someone else's has, I will not be disappointed. I will just be so happy for the new owner.
And tired, very, very tired.

I understand. I had the same night.

I hadn't thought about owning a country inn until I heard about the contest. My research then revealed that the Center Lovell Inn would be a wonderful fit for my background and for my future plans. Alas, it wasn't meant to be, but there was only a heartbeat of sadness. Swift recovery from the sting of loss was fueled by the unexpected and inspiring realization that the world is full of soulful people who dream big and also believe in the dreams of others. The $125 contest entry fee wasn't a fool's purchase. It bought months of hope, anticipation, excitement and camaraderie, and it was worth every penny.

I, too, am happy for the winner who remains unidentified until legalities are concluded. I am also happy for Ms. Sage, who happened to win that very inn a couple of decades ago in a similar essay contest. But I am most happy for the impressive number of gracious losers who chalked up the experience to a valuable life event, then plotted their next move.

The Center Lovell Inn set up a Facebook contest page, which garnered thousands of "likes" in no time. After all, one of us would be the new proprietor of a gorgeous Maine country inn. As contestants posted comments and shared the dream, moderator Jill (sister-in-law to Janice Sage) offered updates and encouragements. She was down to earth, accessible and integral to the process.

Contestant Éva Rawposa applauded her efforts with this post: "Can I just say it again Jill... THANK YOU! You have been such a gift throughout this... truly I think you added an extra special touch that would be a challenge to replace!"

And Jewel Chase Mathewson directed her appreciation to both Janice and Jill for the way she and all other contestants were treated: "Thank you so much Admin for keeping us all informed. I know that everyone has poured their hearts into this contest and the reciprocal respect is truly appreciated."

If we attempt new things, give our all and experience exhilaration from the effort, then if that's not a win, I don't know what is. Sure, I wanted that inn... badly. But I don't have a smidgen of dismay about losing it to someone else who wanted it as much as I did.

Near the end, contestant Carol Kent recognized the power of positivity that emanated from the Center Lovell Inn contest page, even as she anticipated the page's imminent closure. Hence, she invited all that energy onto a new Facebook page of "Sweet Dreamers." The new page is a place of interaction for anyone who dares to reach for a dream, whether they chased this particular dream or not. Everyone's dream is a unique vision of his or her own making, but the act of reaching for that dream is made for sharing.

Carol described her premise for the new page like this: "Just think of it this way; we are entering into the next chapter. This time we are a bit stronger than before the contest. Let's be supportive and all the while trust that we can lean on each other... you are not alone."

One may think that a group of people who lost a contest are gathering only to commiserate, lick their wounds and justify losing. Not so. It's not about examining about what went wrong. It's about embracing what may come next. I've entered scores of contests in my life, won my fair share, lost my fair share, but this residual groundswell of honest-to-goodness heart is worth savoring.

Contestant Darlene Murphy sums up the "Sweet Dreamers" philosophy this way:
"...I hope I can inspire people to find a dream to pursue even if everyone else says that's dumb or crazy or ridiculous. Who cares? It's not their dream. Good night and sweet dreams to all those dreamers out there! We make the world go 'round."

In the end, I cherish this experience in ways that I never anticipated. Wins and losses each bring new perspectives, and embracing both is as important to well-being as diet and exercise. Life's triumphs always begin with a dream, but failures, no matter how monumental, are the stepping stones to making those dreams coming true.

Yes, indeed. Winning and losing can both be amazing.