Trying to compare intelligence and gender doesn't typically yield much in the way of productive discussion, but sometimes research comes along that's worth opening this particular can of worms.

Decades of research show unequivocally that men and women are equal in general intelligence (IQ), but that isn't the case when it comes to emotional intelligence (EQ). There are subtle, and not so subtle, differences in men's and women's expression and understanding of emotions that must be explored and understood.

Gender is a common place for people to assign labels around emotion. Such generalizations have pegged women as everything from the "fairer sex" to overly emotional, and men from emotionally aloof to explosive. You'll find that none of these platitudes are true.

"Women who seek to be equal with men lack ambition." -Timothy Leary

TalentSmart has tested the emotional intelligence of more than a million people and it's clear that women have the upper hand. While women's overall EQ score is just a couple of points higher than men's, this is a statistically significant difference that shows that women have greater skill in using emotions to their benefit.

It just doesn't answer the pressing question: why? 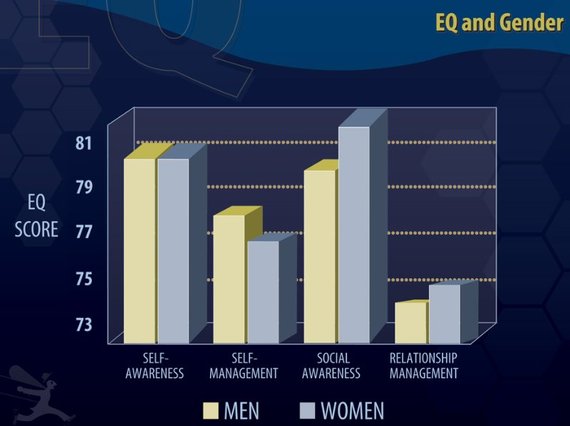 To understand why women outscore men, we have to look at scores for each of the four emotional intelligence skills by gender. There's a reliable pattern in the data that points to some interesting explanations for the gap.

Self-awareness is how well you understand your own emotions in the moment, as well as how well you understand your tendencies--the people and situations you handle well and those that push your buttons. This is the one place where men and women have perfectly equal scores. It's also a place where men have been given a bad rap. People often assume that men aren't tuned in to their emotions or don't understand them. Clearly, that isn't the case. Of course, men also have a tendency to hop on this bandwagon--by feigning to have no awareness or understanding of their emotions--in the hope of avoiding any accountability for their actions. Now we know better.

Self-management is what you do with your emotions once you're aware of them. Since you can't make emotions disappear, effective self-management requires channeling your emotions into producing the behavior that you want. This is the one area where men outscored women. I believe that the best explanation for gender differences in emotional intelligence is how we are socialized growing up (reinforced by societal gender pressures we experience as adults). In the case of self-management, men are often expected to be emotionally "strong" and in control of their emotions, which may explain why they outscore women slightly.

Social awareness is how well you understand the emotions and experience of other people. This requires the ability to tune in to body language and other unspoken signals, since people don't usually come out and say what's going on with them. This is an area where women outscore men by a fairly large margin (statistically speaking). This is also a skill that women are socialized to practice and possess from childhood in ways that men aren't. Right or wrong, women are expected to take care of other people (and are rewarded for doing so). This gives them an upper hand when it comes to social awareness. Men, to their detriment, aren't rewarded for social awareness in the same way that women are, and this carries over into adulthood.

Relationship management is the pinnacle of emotional intelligence. It requires that you use self-awareness, self-management, and social awareness in concert to better your relationships as you interact with other people. You cannot hope to get the most out of your interactions with other people until you understand your emotions, cue in to their emotions, and use this knowledge to adjust your approach on the fly. Women have a slight edge in relationship management for reasons described in the social awareness section above.

Emotional intelligence presents a significant advantage for women in the workplace. Whether you're a man or a woman, don't just sit back hoping that you're one of the high-EQ types. EQ is a flexible skill that you can improve with effort. To that end, here are a few things that you can do to improve your EQ today:

Drinking excessive amounts of caffeine triggers the release of adrenaline, and adrenaline is the source of the fight-or-flight response. The fight-or-flight mechanism sidesteps rational thinking in favor of a faster response to ensure survival. This is great when a bear is chasing you, but not so great when you're responding to a curt e-mail. When caffeine puts your brain and body into this hyper-aroused state of stress, your emotions overrun your behavior. Caffeine's long half-life ensures you stay this way as it takes its sweet time working its way out of your body. High-EQ individuals know that caffeine is trouble, and they don't let it get the better of them.

It's difficult to overstate the importance of sleep to increasing your emotional intelligence. When you sleep your brain removes toxic proteins from its neurons that are by-products of neural activity when you're awake. Unfortunately, your brain can remove them adequately only while you're asleep. So when you don't get enough sleep, the toxic proteins remain in your brain cells, wreaking havoc by impairing your ability to think. Skipping sleep impairs your brain function across the board. It slows your ability to process information and problem solve, kills your creativity, and catapults your stress levels and emotional reactivity. High-EQ individuals know that their self-control, attention, and memory are all reduced when they don't get enough sleep. So, they make sleep a top priority.

Stop Negative Self-Talk in Its Tracks

The more you ruminate on negative thoughts, the more power you give them. Most of our negative thoughts are just that--thoughts, not facts. When it feels like something always or never happens, this is just your brain's natural tendency to perceive threats (inflating the frequency or severity of an event). Emotionally intelligent people separate their thoughts from the facts in order to escape the cycle of negativity and move toward a positive, new outlook.

Appreciate What You Have

Taking time to contemplate what you're grateful for isn't merely the right thing to do; it also improves your mood because it reduces the stress hormone cortisol by 23%. Research conducted at the University of California, Davis, found that people who worked daily to cultivate an attitude of gratitude experienced improved mood, energy, and physical well-being. It's likely that lower levels of cortisol played a major role in this.

Why do you think women outscore men in emotional intelligence? Please share your thoughts in the comments section below as I learn just as much from you as you do from me.