Sexism in the workplace is the Chrissy Teigen of liberal causes -- so hot right now. It's right up there with inequality and white privilege. I worked in investment banking and thrived in a male-dominated culture that laughs in the face of political correctness, and occasionally basic human decency (illuminated on Twitter as @GSElevator), so I've seen plenty of examples first hand.

One of my first bosses (he's still at Citigroup) referred to the practice of banks encouraging the hiring of more women as The Office Beautification Project. He wasn't joking either; he only made time to interview female candidates.

One day, he gleefully held up the résumé of a woman he was about to meet. "It says 'One of Glamour Magazine's Collegiate Women of the year.' Sounds promising."

While a typical investment banking interview can run 45 minutes or longer, he came back within 15 minutes. "Well, I guess looks weren't among Glamour's criteria." Everyone within earshot laughed.

The wage gap is largely a myth...

We hear a lot about gender inequality and specifically, the pay gap. "Today, the average full-time working woman earns just 77 cents for every dollar a man earns... That's an embarrassment." That's President Obama, and this kind of rhetoric is probably more detrimental to gender equality than the Office Beautification Project.

If women actually got paid 23 percent less than men for the same work, then every shareholder-conscious CEO in the country would hire only women. It's not dissimilar to the logic behind sending jobs overseas. And instead of being vilified, that CEO -- most likely a white man, and probably named John -- would be named Jezebel's Person of the Year.

Men also tend to exhibit more aggression and less empathy, while women demonstrate greater compassion and parental instincts -- traits that correlate to how much or little someone gets paid, regardless of gender. This behavior has even been observed in monkeys, where, when left with a pile of toys, the females generally prefer stroking and holding baby dolls while the males gravitate to the trucks and toy hammers.

This is perhaps why women don't negotiate their salaries as aggressively as men. Ellen Pao, interim CEO of Reddit has a solution for that -- banning salary negotiations. To me, that sounds like banning bedtime stories (a professor in the UK recently suggested it, albeit somewhat hyperbolically) because it's unfair to children with deadbeat parents.

Moreover, women have a better sense of work/life balance. Generally, they choose to prioritize family over work, often deciding that raising and shaping human lives is more important and rewarding than a career. And that's no bad thing -- kids with a full-time parent outperform academically and emotionally. But when you opt for shorter hours and prioritize family, you end up with less experience, and a smaller paycheck. In fact, a recent study revealed that many women don't even want that promotion.

But there's still a huge problem...

My misogynist boss in London is not evidence of gender inequality. He's a single anecdote -- a data point. However, my office was filled with data points just like him. Many women might say this doesn't apply just to Wall Street; it's a universal fact of corporate life. That's probably true. But, the locker room culture on Wall Street is not only more pronounced, it's celebrated.

I experienced a work environment that is subtly exclusionary. Colleagues bond with their superiors over drinks or other social activities that aren't often conducive to women. Over time, given the disparate number of opportunities that sprout from this basic connectivity, the dynamic of inherent disadvantage snowballs. After a few years, the guys like me who can binge drink with clients and are good at golf get more deal experience, promoted more quickly, and paid more. That's a "meritocracy."

Sometimes the exclusion is intentional. We had a Director who generated a lot of revenue for the firm and was making a big push for promotion to Managing Director. The only mark against him was that he had a reputation for being "a bit of a scoundrel." In an effort to be taken more seriously as an officer of the firm, he simply stopped working with or including any female bankers on his deal teams. Something similar allegedly happens in Congress.

It could just be that the Congressmen like telling dirty jokes as much as bankers do. I can't tell you how many times a conversation between a group of men in a bullpen or trading floor will change (or cease) as soon as a woman entered or left the group. This behavior is so common across the corporate spectrum that we often don't even think about it. These scenarios are universal, but Wall Street takes it to another level.

And then there's fairly common practice of using women as "tethered goats" -- taking an attractive female subordinate to a client meeting as eye candy. I've even had hedge fund clients request that we bring specific female colleagues to meetings or drinks. She might get the short-term benefit of attending some meetings ahead of her male or lesser-attractive peers, and think her contribution is being valued, but it's not going to help her build a career. In reality, it's just a running joke.

The notion of women not realizing that they're the joke is consistent theme. A group of bro bankers I worked with liked making "high stakes" wagers on anything from the score on a football game to how long an MD could go without yelling at an analyst. It didn't matter what they were betting on, the stakes were always the same. The loser had to invite a female analyst, typically "the ugliest one" as chosen by the other bros, out for dinner and a movie, and pretend to be totally sincere.

Worse still, these attitudes are contagious. When one of our credit traders deemed my new analyst to be too timid for the trading floor, he took it upon himself to toughen the kid up. He made him take a poll of all the guys on the trading floor, asking them to rank the credit sales girls in order of "most f*ckable." The kid then had to make a one-page PowerPoint presentation of his results to a small group of guys. The torch had been passed to the next generation of bankers.

Perhaps, these scenarios help explain why women don't want to get promoted; their ambition is often crushed.

There's no easy solution, but it helps to stop lying about the facts and have an honest conversation about what the real issues are. Last week, a Brooklyn bar announced that they will start charging women only 77 percent of their bar tab in order to raise awareness for gender inequality. Instead of addressing the problem, the bar is chiseling away at the seriousness and credibility of the issue.

Forcing or pressuring companies to promote women based on anything other than merit is simply a different form of prejudice. There's also no point unless there are substantive changes in company policy and corporate culture. We need to acknowledge and embrace the differences between men and women, instead of trying to pretend that we're all the same. Supporting women who choose family and a healthy work/life balance is the only way to get more women into senior positions, and that's the only way to change the corporate culture.

John LeFevre is the creator of @GSElevator on Twitter, and the author of a new book, Straight To Hell: True Tales of Deviance, Debauchery, And Billion-Dollar Deals, in which he chronicles his outrageous experiences working in investment banking. 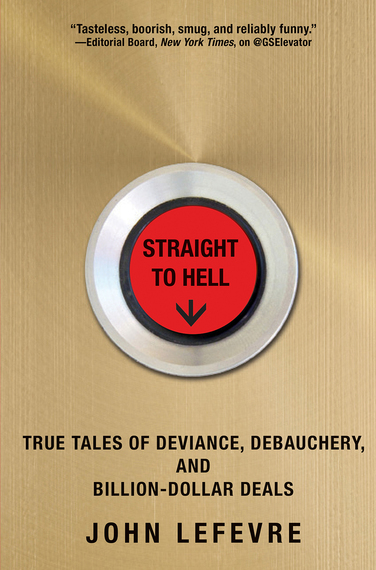