My contractions were a minute and a half apart. The pain had passed the point of excruciating -- twisting and contorting every inch of muscle in my abdomen while simultaneously splintering through my organs like medieval lawn stickers through a careless, exposed foot.

Or, you know, at least that's what it felt like.

I was in the throes of the worst pain I had ever felt, going through the necessary, torturous discomfort in order to bring life into the world. I was doing what no man can, what can only be described as miraculous and divine, and what highlights the incredible capabilities of the female body.

And I was afraid to make a sound.

In a moment when I had, arguably, every right to be selfish and take up space and make as much noise as I deemed necessary, I was actually afraid of being heard. Or seen. Or spacious in my overall existence.

I put my effort, not into focusing through the next surge or mentally equipping myself for the overwhelming emotional waves, but toward staying quiet and inconspicuous and undemanding. I thought of the nurses and the doctors and my partner and my best friend and the other laboring women and their families and the janitor working that dreaded night shift. I thought of those trying to sleep or watch a re-run episode or read a discarded magazine, and I didn't want to upset or annoy or inhibit them by vocally expressing my, shall we say, extreme discomfort.

I consider myself a strong, independent woman. I've lived alone and I have my own bank account and I've voiced my opinions. I've said what's on my mind with little regard for the disapproval of others, and, like many women on the Internet, I've received death threats and rape threats and negative comments on my looks as a result. I'm not afraid to upset the mansplainers or the misogynists or the sexist trolls who apparently thrive on the verbal assault of the opinionated, opposite sex.

And yet, when I was at my most carnal and animalistic, relying on my basic, natural instincts, I reverted to the quiet, reserved and fearful woman who was afraid to be noticed.

The same can be said when I'm in a new environment or around new people, regardless of how inviting or kind or engaging they may be. Instead of stretching my voice and confidently owning the space I invade, like my lazy legs do on a Sunday morning spent couch-cuddling, I retract into some minuscule version of an otherwise loud and vivacious woman. I try to be as inconspicuous and, therefore, as uncontroversial as possible.

After a relatively embarrassing time of self-loathing and self-examination, I've realized that most women aren't afraid of being heard; they're afraid of being misheard. When I was experiencing contractions and birthing my son, I was very conscious of the women who've labored before me. Was I doing this right? Was I as strong or as fearless or as miraculous as they were? Was I making mistakes, and, if so, how could I hide them? 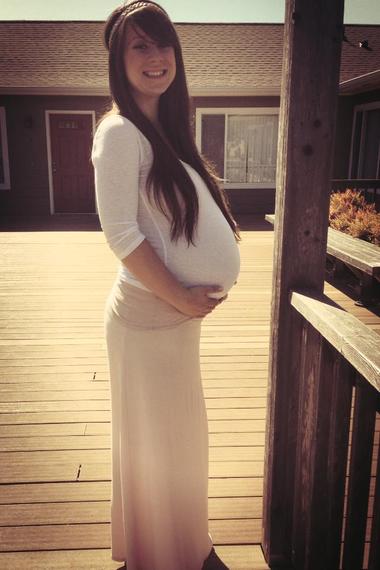 When I'm being my loud and opinionated self, am I saying my probably rage-evoking words the correct way? When I walk into an unfamiliar room filled with unfamiliar people, am I able to occupy space in an acceptable manner?

As the pendulum has swung in the opposite direction of outright oppression and invasive sexism, an immense amount of pressure is being applied to women to be constantly correct. We can maintain a certain amount of space, but only if we do so in a manner deemed appropriate and inspiring. We must portray a strength and resolve and certainty that fortifies and ensures our right to simply exist and be seen and exercise a voice.

So when I am behind a computer and have time to be thoughtful and concise and, if all goes well, fool-proof, I have no problem carving out my corner and owning my essence. But if I am in the middle of spontaneous moments and the chance for miscalculation or inaccuracy is very real, I diminish myself. I choose concealment instead of allowing myself to take an extremely human action, and make mistakes.

The beautiful, flawed individual is somehow responsible for an entire sex, her mistakes used as a reason to dismiss a large population of society.

Women shouldn't be afraid to be human. They deserve the space to falter and fail in spectacular and obvious ways. They warrant the space to be vulnerable and mistaken, all the while being disastrously unattractive. While strong, seemingly flawless women are worthy of praise and admiration, so are the imperfect and blemished.

And when a woman does what humans so wonderfully do, and makes a faux pas of epic proportions, she deserves the right to soldier on, her strength never questioned or negated.

My partner and I plan on having another child, and while I am definitely not looking forward to the excruciating, twisting and contorting pain of his or her entrance, I am looking forward to being a blundering, horrific and otherwise intolerable mess when bringing him or her into the world.

I look forward to taking up space in my own uniquely unsatisfying and uncomfortable fashion, because being a woman isn't about being consistently strong and courageous and infallible.

It's about taking up space in our own mistake-riddled, inappropriate way.

Funny Women - Past And Present