No matter what cup size you are, you can probably agree that bras are a huge pain. There's the constant adjusting, tricky fit and don't even get us started on the subtopic of underwire.

But with recent studies suggesting that bras are actually doing more harm than good, we had to delve deeper: Why are we wearing bras, anyway? To answer that question, we spoke to American Society of Plastic Surgeons President Dr. Robert X. Murphy, Jr. and Dr. Cynthia S. Vaughn, DC, spokesperson for the American Chiropractic Association.

Yes, gravity is the enemy.

Breasts are held up naturally (read: without a bra) in two ways: There are internal suspensory ligaments and then there's a skin envelope on the outside that contains the breasts. The breasts themselves are made up of a mixture of gland and fat. "The more gland that there is, the heavier the breasts," Dr. Murphy explains. "The more fat that there is, it can still take on a larger appearance, but it's less dense than breast tissue, so it would not be quite as heavy." All of this weight combined with the pull of gravity is what leads to sagging and discomfort.

That's where bras come in. "For breasts of a certain size, the bra does provide some support and keeps the breast tissue from just exerting all of the force that it would normally if it were not suspended or supported," says Dr. Murphy.

Wearing bras can improve your posture and prevent a lot of spine problems and back pain.

Women with large breasts can usually attest to the back and spine pain that comes with their curves. When you carry such a heavy load in the front of your body, your back has to compensate for the weight if you're not wearing support. This takes a toll on your posture, since the normal physical response is to roll your shoulders forward, says Dr. Vaughn.

"It's almost natural to get that rolling forward, whether it's because you're embarrassed about the size and it becomes more of a behavioral reaction or simply because it's easier to carry the weight with the rounding," she explains. Dr. Vaughn strongly recommends wearing a bra, which works to lift the breasts up and in, so that proper posture can occur more comfortably and naturally. (She also suggests that you strengthen your romboid muscles, the muscles between your shoulder blades, which can keep the shoulder blades toned and pulled together more easily.)

Bras also help delay sagging... as long as you wear them regularly.

Sure, there's no way to stop the pull of gravity and sagging altogether, but you can delay the process with bras, says Dr. Murphy. Just remember to wear bras as regularly as possible, since there's no way to "train" your breasts via muscle memory. "Skin and ligaments have no memory of their own," says Dr. Murphy. "Because of the nature of what causes that tissue to stretch and sag, it's not something that can be trained or developed like a muscle." Wearing a bra can also prevent some of the ill-shaping that comes with all of the stretching and drooping, Dr. Vaughn adds.

But don't think you have to wear a bra 24/7: Sleeping in one isn't helpful, says Dr. Murphy. "What causes the breasts to have a painful effect on someone as they age is the fact that the weight of the breasts pulls with gravity when you're erect," he says. "When you're sleeping, the weight of gravity goes away."

As for that recent study which suggested that bras potentially hinder the growth of muscle tissue to provide "natural support"? Not so true, says Dr. Murphy. "That's not likely, because the muscle's not involved at all," he explains. "The small suspensory ligaments that develop with the breast, develop as part of normal breast development. There's nothing that could externally cause the tissue to not develop."

Even women with smaller breasts should take heed.

Dr. Vaughn notes that smaller-breasted women can't avoid the cosmetic issues that come with going braless, even if they're not likely to experience pain. "I think there's that notion out there that prevails that 'Well, gosh I don’t need to wear one, so I'm going to go without.' But even small breasts need to be supported," she explains. "It's not so much for current times, but for later in life." Meaning: If you choose not to wear a bra when you're younger, you're going to see more sagging as you get older. "By then, it’s too late. You can't take it back and reset," Dr. Vaughn says.

To avoid neck and shoulder pain, the way your bra fits is key.

It's not hard to dig up headlines claiming that way too many women out there are wearing the wrong bra size. But wearing the wrong size of bra can be detrimental to your health. Dr. Vaughn cautions women to not just buy the same size bra out of habit. "That would be the same as buying a pair of jeans without trying them on," she says. "We know to try jeans on, because manufacturers are so different between one company's size 6 and another company's size 6." So make sure you get measured each time you shop for a new bra.

Another problem lies in the types of bras women are buying. "Women want to wear the attractive, sexy bras, and those tend not to be as supportive as the ones necessary for their given size," Dr. Vaughn says. "If a very large-chested woman wore the kind of bra that's going to support her the best, it's going to look like it has industrial strength." And while those thick straps and bulky bands may seem less appealing to shoppers, those are actually the best situation for women with larger breasts.

So why all the bulk? If you think about the design of a bra, the weight of the breasts in front is carried in that back strap, where it's distributed across the spine. Those daintier, smaller bands don't spread out the weight as well as thicker bands do, which can lead to back pain, bone spurs and degenerative changes seen later on X-rays. "The injuries invariably match the very location where that cross piece goes across the back," Dr. Vaughn says.

As for those shoulder straps, they bear the brunt of the vertical weight and stress. "If the band is too thin there, you will see those bra grooves," Dr. Vaughn says. "Some of these cuts that these women get can be quite severe. When they're standing there without anything on, you can see the marks and indentations on their shoulder, which create shoulder problems and possibly even neck pain."

Luckily, Dr. Vaughn has a few tips for making sure your bra fits. "The proper cup of course is when no tissue is sticking out and when the center piece lays flat on your sternum," she explains. "If that cross in the front is sitting up too much where you can put a finger or two down there, then that is too small of a cup and you need to go up to the next one so that it sits flat on the sternum."

Bras can be fashion statements: 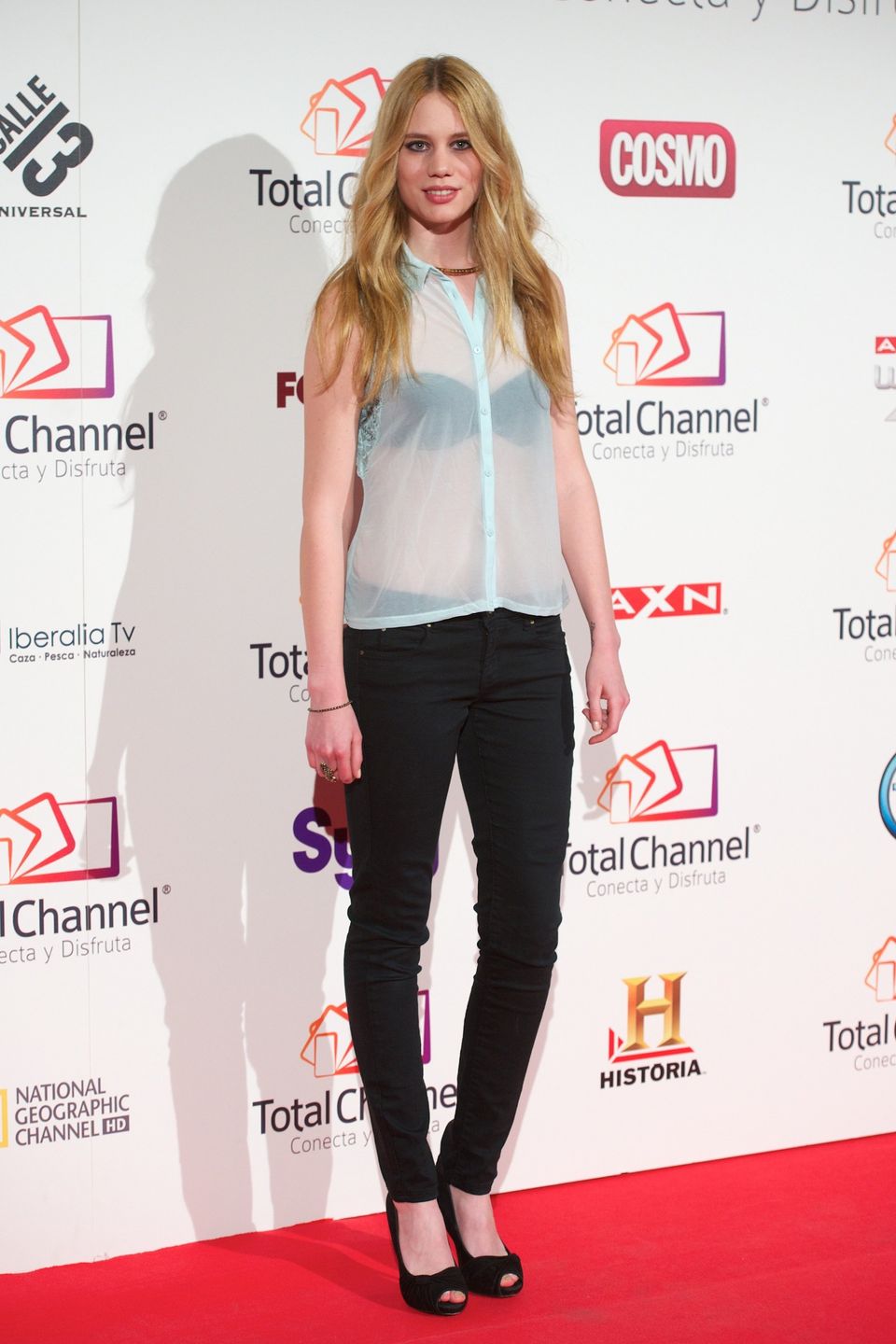 Celebs Who Are Proud Of Their Bras