Below is a story the NYT posted on Twitter, followed by a screenshot of the first several comments on it. Notice anything? The men on this thread are rolling their eyes, but the women (I'm assuming Emanuela is a woman), are like "oh yeah if that's your thing go for it."

Wearing makeup to workout: it's a touchy subject https://t.co/XHmmT4m7kc pic.twitter.com/S4np8rNKQU 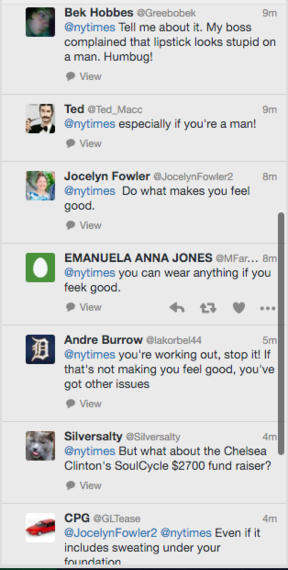 So let's talk about sweating and makeup a little bit.

A workout, for women, is about so much more than the thing itself -- especially if it's a flashy group class like SoulCycle. Working out for a woman is often, intentionally or not, tied up in her body image issues that she's been working on since the first time she picked up Seventeen magazine. The way she looks matters and always has. Many women deal with that in part by 1) painting their faces and 2) trying to stay fit (and thin). Body image and perception issues do not go away just because one is working out. They're often heightened in a group class or gym kind of environment. Judgment of other people at the gym is part of what the gym is all about.

But there are also other reasons a woman might want to wear makeup. Consider instructors (like one of the sources for the Times story): teaching a class is their job. They are not just exercising, but also selling the brand and the experience. For them, looking fresh and sexy is not just a cultural pressure, but a professional obligation. It's rather unsurprising that they would use a little bit of makeup to help them meet that obligation. I wear makeup to work. So do about 90 percent of the women I know. It's a thing women do and shouldn't be ashamed of.

Now let's talk about me. When I race my bike, I often wear makeup. It's not because I think I have to. There are two reasons: first, I grew up figure skating, which is an incredibly performative sport. I would put makeup on before warming up, just after I arrived at my place of competition. It was part of the ritual of performance. It signaled to my mind that I needed to get in a deeply focused mindset. Putting on the makeup was much more important than how it looked.

Second, I do a lot of things that are not considered typical of women. This includes the calculus class I took as a sophomore in high school, muddy bike races, and Bitcoin conferences. As a form of coping with stepping outside my comfort zone, I tend to present a more extreme femme version of myself in these situations. It's really not much about other people. It's about feeling polished, which gives me the confidence to crush souls and defy expectations.

I've gone off on a long tangent about myself now, but the larger point is that there are dozens of different reasons that women might choose to wear makeup when working out. (There are plenty of women who think wearing makeup when working out is dumb or unnecessary. That's cool too. Working out is the ultimate "you do you" situation.) Perhaps some women wear makeup to SoulCycle because they are super shallow and vain, but I suspect the real reasons are much more complicated than that. And it's totally fair to devote space in a respected trolling operation newspaper to this subject.