(And every other profession.) 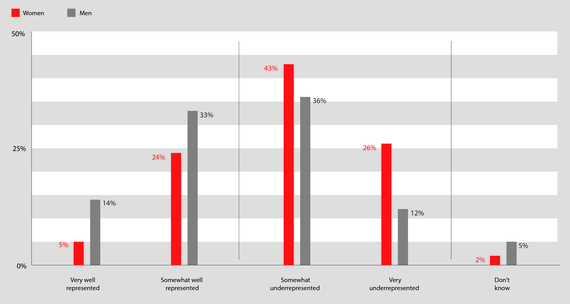 Perceived representation of women in the field of architecture. "Women strongly believe that there is not gender equity in the industry, but men are divided on the issue." From American Institute of Architects, "Diversity in the Profession of Architecture."

Last week, on International Women's Day (March 8), the American Institute of Architects (AIA) published "Diversity in the Profession of Architecture," its first diversity report in a decade. The release follows the creation in December of the AIA's "Equity in Architecture Commission," a panel of twenty architects, educators, and diversity experts to investigate diversity and inclusion in the profession. The new report documents a survey of over 7,300 professional architects and students, including men and women, 79% of them whites and 21% people of color.

As I wrote three years ago, studies of this kind generally reveal little progress in the profession, and the new report is no different. Fewer than a quarter of all respondents feel that people of color are represented well in the field, for example. However, the majority say they work for firms that "treat all equally, regardless of race or ethnicity," suggesting that minorities are underrepresented but, for the most part, treated fairly. Responses vary between men and women, however. Over two thirds of both white men (70%) and men of color (67%) agree with the above statement, while only 60-62% of women do, so the gap between races (2-3%) is much smaller than that between the sexes (7-8%). Similarly, when asked if they work for firms that "treat men and women equally," over two thirds of men (65-69%) agree, while only half of women do (53-55%).

Is gender parity is a bigger challenge among architects than racial equity is?

More than 70% of female respondents feel that women are underrepresented in the profession, and half say they are paid less than men and are less likely to be promoted to senior positions. Not surprisingly, overall job satisfaction is 6-12% higher for men than it is for women. What this doesn't reveal is that, even for men, only about half (52-54%) are satisfied. While the gap between men and women is troubling, what's possibly more troubling is that architects in general don't seem very happy in their jobs. Fewer than half of all respondents, male and female, report doing meaningful work (39-45%) or being recognized for doing their jobs well (42-48%), and about a third (29-38%) are happy with their salaries.

2015 AIA president Elizabeth Chu Richter writes in the Foreword to the report that architects "must be a mirror of the rich human tapestry we serve." Diversity is important in its own right, but, as is often the case with studies of this kind, the report and media coverage dwell on a lack of diversity without thoroughly explaining why diversity is important. But the evidence is abundant.

Ethnically diverse companies in any field are 35% more likely to outperform their competitors, and gender-balanced companies are 15% more likely, according to reports. Organizations also double their potential for creativity and innovation when they "give diverse voices equal airtime" (Center for Talent Innovation).

Perceived factors contributing to an underrepresentation of women in the field of architecture (AIA).

Women are especially important to diversity in any type of company, since studies show they improve the entire triple bottom line of social, economic, and environmental value:

Economic impact. According to research, companies with more women in senior management enjoy higher sales, return on investment, profit, and productivity--by wide margins. A 2014 study found that organizations with more women on their boards are more financially stable and less prone to excessive risk-taking. Since women are better for the bottom line, would architects enjoy better salaries if more women held leadership positions in their firms?

Environmental impact. As Kira Gould and I show in our book, Women in Green: Voices of Sustainable Design (2007), women are much more likely than men to support environmental causes--through their work, consumer choices, voting, and activism. The average carbon footprint of women is considerably lower than that of the men, who are more skeptical about climate change, although they understand the science less. More women in leadership could very well improve architects' slow rate of progress on sustainability.

The AIA report highlights three obstacles for women in architecture: concern about work-life balance, long work hours "that make starting a family difficult and thereby encourage some women to leave the field," and lack of flexibility. Accordingly, the study concludes that in order to attract and retain more women the profession must promote better work-life balance and increase job flexibility. This is consistent with recommendations in other fields to promote stronger cultures, better benefits, and pay equity.

Whatever the strategy, the profession of architecture urgently needs more diversity. As Richter has put it, "The world around us is changing much faster and we can do better."

Lance Hosey's latest book is The Shape of Green: Aesthetics, Ecology, and Design (2012). Follow him on Twitter: @lancehosey.