Principals have a tough job, and it's getting tougher. "Very frankly," the late Arlyn Gunderman used to say, based on his experiences as a principal and president of the National Association of Elementary School Principals in 1941-42, "[my role as a principal] is to motivate as much as I can, for as long as I can, people who are in essentially dead-end jobs."

To this job description, add the tasks of implementing directives from state and district superiors and responding to teacher, parent, and community concerns (often about those very same directives). Whew. It makes sense that today's principals have described their jobs as isolating and not at all doable. In 2014, the School Leaders Network reported that, even with a small team of assistants, principals say they do not have the bandwidth to take on all of the leadership demands associated with developing a 21st-century learning system for students.

But what if principals' roles were defined differently? Perhaps one way forward is to pursue a different job description. As an advocate for teacher-powered schools, which are collaboratively designed and run by teachers, I often meet principals who believe that a teacher-led approach to school governance is bound to make their positions obsolete.

No, I tell them, teacher-powered schools just shift the accountability framework. The team of teachers becomes accountable for school success, alongside you, I explain. 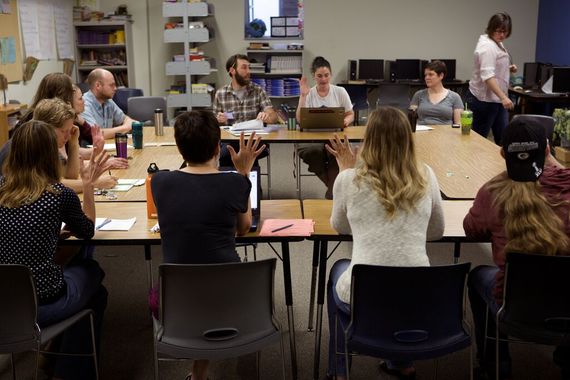 Truth is, the teams managing nearly every one of the more than 80 teacher-powered public schools spanning the United States choose to have a principal, a lead teacher (often with an administrative credential), co-lead teachers, or a head committee that includes a principal and teachers.

But in these schools, leaders do not focus on ensuring teachers' compliance with outside decisions. Instead, leaders facilitate the team's decisions about how they will carry out their shared purpose--mission, vision, values, and goals.

Here are just four reasons why this different conceptualization of the principal job is worth considering:

When teachers are both responsible and accountable for making the decisions influencing school success, they also own the outcomes. Teacher teams do not have a problem with being accountable for results when they have the authority to determine how best to achieve them. They take pride in what works well and refine what doesn't.

For example, when math scores dropped by five percent in one year, the teacher team at Social Justice Humanitas Academy (SJHA) worked with Principal Jose Navarro to integrate math subjects for students in every grade. Teachers' focused implementation of their own decisions has made SJHA one of the top-performing schools in in Los Angeles Unified School District.

2. Flipping the script to focus on students

In teacher-powered schools, principals serve (and are part of) the team that runs the school. They act as liaisons between the team and the district or charter authorizer to whom the team is accountable. Principals report that advocating for their team to administrators, rather than the other way around, is challenging yet far less isolating and far more student-centered (and therefore, more meaningful and rewarding).

Principal Ayla Gavins at Mission Hill K-8 School in Boston Public Schools described her role in a post for The Forum for Education and Democracy: "If [a] visitor happened in on a faculty meeting, he or she would have a hard time identifying the administrative head, who would be seated among faculty members, listening and taking notes." In the documentary series A Year at Mission Hill we see Gavins in a liaison role. When her team fears a big new directive will hinder student growth, Gavins offers to take personal risks (to be seen as non-compliant) to share their proposed alternative with district administrators.

Teacher-powered teams choose leaders who can help them cultivate a culture where everyone is responsible for whole-school success (not just what happens in their individual classrooms). Teams seek leaders who value group discovery of clear roles and responsibilities combined with consultative behavior, listening, openness to differing opinions, and mutual respect.

Dee Thomas was principal of a conventional high school before co-founding Minnesota New Country School in rural Henderson, Minnesota where colleagues selected her to be lead teacher. The team designed the role to handle administrative paperwork and compliance matters in the context of their shared purpose, but Dee also taught students and had an equal (not superior) voice at the table to make decisions. She said in an Education|Evolving video, "The only time that I . . . step in as a licensed administrator is if there is a health and safety issue that we cannot step on, or if there's a liability issue . . ."

For example, the San Francisco Community School team has developed a Support and Accountability Path so they know whom to communicate with when they have a peer-to-peer conflict. First, each teacher must answer a question: Is this something I can and should let go? If the answer is no, then they should request a time to speak with the colleague to work it out directly. If the colleagues are not able to come to terms about their conflict, they take it to a committee of teachers to help resolve the issue. A principal is involved at specific points if necessary, but the process distributes the job of resolving conflict amongst the team.

At the Teacher-Powered Schools Initiative, we increasingly hear from principals interested in encouraging teachers to convert their school to a teacher-powered approach. As they weigh the costs and benefits, we tell them: pioneering is never easy work. Sometimes risk is rewarded and sometimes it's not. But is the challenge of the current principal job any less daunting? Many are ready to explore a new frontier.